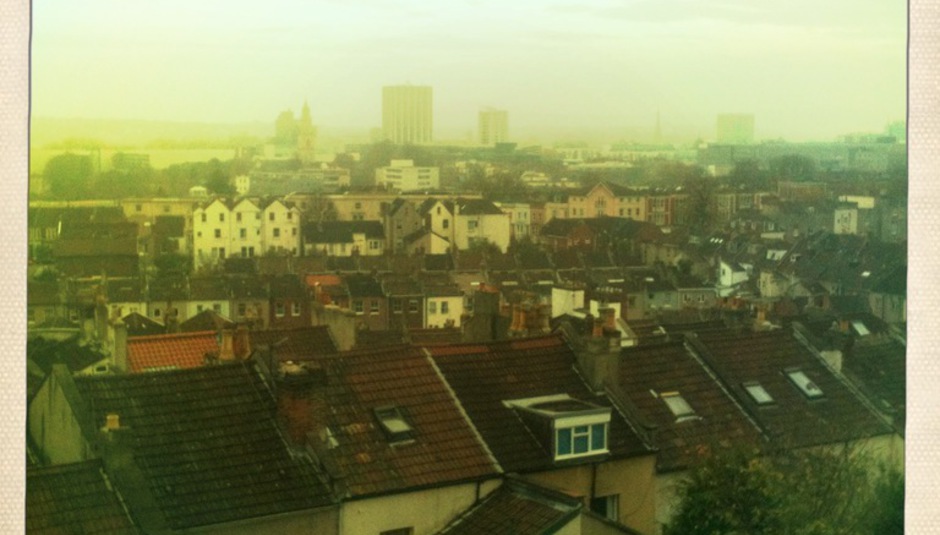 I love the tail end of the year, mostly because I’m just a geeky kid at heart and I like making lists. Without wanting to make broad generalisations about DiS readers, I assume you probably enjoy making lists too, so you’ll understand that for geeky kids like us the end of the year is like, well... Christmas.

Given the above, it was inevitable that this final Drowned In Bristol column of the year was going to be list based. Although, to be honest, I’ve sort-of bottled-it with this, for one thing it’s a bit undefined; rather than being a list of albums or tracks it’s sort of just a list of, well, stuff – LPs, tracks, artists, promoters, clubnights etc. Secondly, it’s not ranked or anything, just in alphabetical order, and 14 is pretty arbitrary number. Finally, I’m reluctant to use the word ‘best’, as that would imply I’m some kind of omnipotent force in this city with the knowledge to say categorically what’s better than everything else, which would be way off the mark, as I’m sure there’s masses of excellent stuff I’ve missed or forgotten (use the comments section below to mention these things please!) I know, I’m a disgrace to obsessive, geeky music fans everywhere. Anyway, here we go...

Al Tourettes is a Bristolian producer I’m a big fan of, but as-yet haven’t had a proper excuse to mention in this column as, until recently, he hadn’t released anything since August 2010. Conveniently though, last month he quietly put out superb 3-track EP of electro-tinged, off-kilter techno, titled Swan Sketch, on Bloc festival-affiliated label Baselogic (streaming above). His contributions to 2011 may be fairly minimal, but this EP and his excellent mini-mix for Mary Anne Hobbs over the summer are easily enough to earn him a place in this list.

Joint ventures, the LP of collaborations by local producer, DJ, blogger and Build-label boss Baobinga is something of a love-in for the city’s bass music scene; featuring contributions from the like of Hyetal, Guido, Ginz, Kowton and Gemmy. The record works as more than just a compilation of Bristol’s dance music talents though, tied together throughout by Boabinga’s percussive production style and knack for bringing out the best traits in his collaborators.

Another act that haven’t been mentioned in this column before - a fact which I am making amends for now - Bravo Brave Bats are a three-piece band who make deceptively straight-forward, but very well executed, rough-edged guitar pop. Last month they put out their second EP of the year, which you can grab from their Bandcamp page. Lead track Red Giant (above) is excellent, in a ‘sounds slightly like Surfer Blood covering Sunny Day Real Estate’ sort-of way.

On a sidenote, I need to thank DiS message board-frequenter Moribund for the original tip off on these guys. He also co-runs an excellent regular night upstairs a The Hatchet, called I’m Not Yelling, which plays host to a nice variety of local bands.

Full disclosure: I do have some involvement with the 51°27' clubnight (2nd room DJ, very little to do with booking or running anything), but that’s not going to stop me including the night in this list. Essentially, the new regular Friday night event, held at the Thekla, deserves kudos for bringing an impressive collection of DJs to the city - so far including the likes of Oneman, Kingdom, Disclosure, Fantastic Mr Fox and Rustie – all for free, or cheap, entry. Of course, it’s also worth giving a mention to some of the other club promoters who have continued to put on excellent line-ups this year, like Crazylegs and Shit The Bed (although, in the case of the latter, dear god what an awful name).

With his debut album Broadcast, Hyetal defined his unique production style, sitting somewhere between retro synth-pop artist and dark electronic producer. While the record share a lot of traits with many of the city’s other producers, it’s set apart by his using of thick, melodic chord patterns, unconventional song structures and the album’s surprisingly clear, full and clean sound. Over the latter half of the year, Hyetal seems to have been shifting away from DJing in favour of live performing, which hopefully spells interesting things on the horizon for his future projects.

When I mentioned the launch of Idle Hands - the independent, dance-focused record store on Stokes Croft - back in March, it was to say that they deserve respect for opening an independent record store in a very tricky economic climate, or at least something to that effect. Well, since then, the market for selling records hasn’t exactly improved, and the store suffered the additional danger of being placed at the epicentre of various riots over the summer. Thankfully, at the end of 2011, the shop is still there, and in one piece, largely helped by their tactics of stocking a spot-on selection of records, being well-stocked with tickets for the city’s clubnights and hosting a variety of interesting, and impressive, instore sets. So, good work Idle Hands - here’s hoping 2012 goes well for them. Idle Hands are throwing an Xmas party in the basement of Take 5 (next to the shop) on Dec 17, featuring Elgato & Billy Blanks, Outboxx and Kowton – check the Facebook event for details.

Tickets for the nights might not be particularly cheap, but you’ve got to admire how successful the Motion promoters have been at providing Bristol with a season of large-scale clubnights. Despite being only in its second year, this autumn’s run of events has brought the sort-of large-scale line-ups to the city that no other venue in Bristol could pull-off. The sound and general layout of the warehouse-turned-skatepark-turned-club has improved dramatically over the past couple of years too. The Hessle Audio night a couple of months back was one of the best clubnights I’ve been to this year.

In:Motion only have a handful of events left this year, a night hosted by beatboxer Beardyman this Friday, and a massive techno onslaught from Seth Vath’s Cocoon, headlined by Tiefschwarz, Onur Ozer and Kyle Hall, among others. They’ve also their annual New Year’s Eve night, featuring a bunch of big names like High Contrast, Tensnake and Redlight, also featuring fast-rising local house talent Eats Everything. Check their site for full details.

It’s impossible to deny that 2011 has been a very good year for Julio Bashmore, having made the jump from a word-of-mouth ‘artist to watch’ to near enough household name (if you live in a house entirely occupied by people at-least quite into underground dance music). At the peak of it all has been this tune, taken from January’s Everybody Needs A Theme Tune EP, fusing classic house elements into an irresistible, bass-heavy anthem. It’s been an all-conquering force across the city’s dancefloors ever since being unveiled at the end of last year, yet miraculously still manages to feel like it hasn’t been overplayed, which is no mean feat. He has a new EP - Riff Wrath - out this month on the label he has a hand in, Futureboogie Recordings.

The debut single from Echo Collective member Kahn, released back in Feb on Peverelist’s Punch Drunk label, is one of the year’s more unfairly overlooked dance tracks. Superficially, 'Like We Used To' bears all the typical hallmarks of dance music in 2011, with its garage-influenced beat, broken female vocal sample and pulsating synths. Yet, unlike a lot of tunes with a similar DNA make-up, it doesn’t forget to pack two crucial elements: an insanely infectious hook and thoroughly danceable beat. Kahn’s two, slightly darker and dub-tinged follow up releases this year have proved he’s definitely an artist worth keeping an eye on, while his recent FACT mix is an impeccable run through the history of music in Bristol (via A Perfect Circle and a bit of Eastern-psych).

It’s also worth giving props to Punch Drunk in general, who’ve continued their tradition of supporting some of Bristol’s best breakthough producers in 2011, with excellent releases from the likes of Ekoplekz and Andy Mac. The imprint’s latest release, I Remain, a new cut from another Echo affiliate Zhou, is one not to miss, stream it over on the label’s SoundCloud page.

Last month, relatively out of nowhere, two of the biggest names in Bristol bass music released this collaborative record on Honest Jon’s. Unsurprisingly, given the talent involved, the album is excellent, drawing on the strains of dark, percussive bass music both artists have developed through their solo releases and nurtured through their respective labels, Tectonic and Skull Disco. In that sense, the sound of the record harks back to a strand of bass music that seems to have fallen slightly out of fashion in recent years - comprised of reverb heavy beats, Eastern percussion and almost drone-like basslines. But rather than being an exercise in revisiting past glories, Pinch & Shackleton sees the two producers pushing the style in interesting new directions, with largely unconventional song structures and innovative use of sampled material.

I haven’t managed to write one of these columns yet without mentioning promotions outfit Qu Junktions at least once. While it might look like I’m desperately gunning for some sort of endorsement deal, in reality the reason behind this fact is simple - they’re just consistently putting on Bristol’s most interesting gigs. In the past fortnight alone they’ve paired up phenomenal jazz-rock artists Flower/Corsano Duo with Saharan garage-rock band Group Irenane, and host Oneohtrix Point Never with support from Hyetal. Plus, between an ear-destroying set from King Midas Sound earlier in the year and putting Hype Williams and Factory Floor on the same bill, they’ve played host to some of my favourite live shows of 2011. If you live in Bristol and enjoy experimental music, you should definitely have their website bookmarked.

I waffled-on about this record in the previous edition of this column, so I’ll keep it short here. Suffice to say, Roly Porter has emerged out of Bristol’s electronic music scene (he was a former member of dubstep act Vex’d) to produce a record a record that spans the divide between electronic experimentation, classical composition and ambient sound-sculpting. I know I said I wasn’t rating stuff here, but if I was going to pick a favourite release by a Bristol-based artist from this year, this would probably be it.

Unassuming folk artist Rozi Plain has been around for a few years now, having released her debut album on King Creosote’s Fence label back in 2008. However, Humans, her latest single, which cam out via London’s Need No Water Records this summer, is probably the best thing she’s released.

2011 has seen Zun Zun Egui make the jump from local curiosities and live favourites to band-to-watch proper, with the release of Katang their debut album on Bella Union. The album merges a sound that arguably has its roots in the Bristolian post-punk of The Pop Group, but reinterpreted via the band’s Sublime Frequencies-style international influences and inherent eccentricities. More than anything though, Katang just has some great tunes.