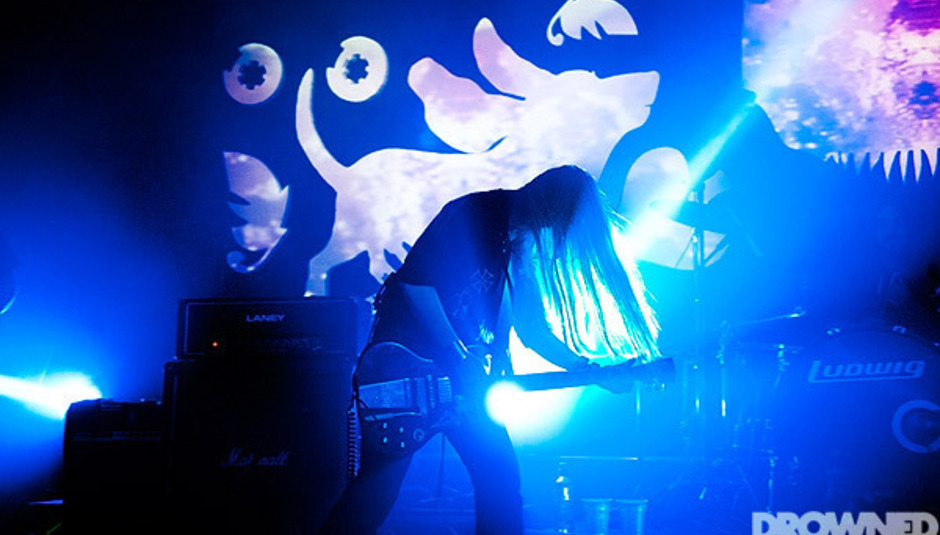 There may be other UK music festivals at which you can enjoy the sounds of violins and lutes, browse thoughtfully curated exhibitions and scoff carrot cake whilst keeping a running count of babies in cute neon-coloured ear defenders. But Capsule’s Supersonic festival continues to be in a field of one, in that the above comes bundled with a wonderfully diverse programme of bands who are nevertheless united by their abilities to skewer your eardrums, liquefy your brain and turn your viscera to a small pile of ash. And for both these things, we love it.

After the inevitable train delays, we pitch up halfway through Friday evening and are immediately drawn like infrasonic moths to the bass sounds emanating from Boxxed, a new venue for Supersonic housed in one of the Custard Factory’s seemingly endless supply of suitably cavernous industrial shells. Most of the acts here delight in its capacity for eyelash-ruffling, ribcage-worrying low frequencies, Drumcunt joyfully stoking up the room with what sounds like a fight between two high-voltage pylons and Cloaks taking their introverted post-dubstep into a kind of body-enveloping psychedelia, the sonic pressure outside pushing the mind ever-inwards. But there is – thankfully for national safety – only one DJ Scotch Egg, and Shige Ishihara is on hyper-charged form tonight, springing around as though he himself is a sprite in a Gameboy world, jumping off his gear table and dodging giant primary-coloured bricks that only he can see as they collide and crash in a symphony of ear-battering awesomeness.

Part of the joy of Supersonic is the way in which all the other stuff going on has had as much love put into it as the music. In one gallery, we find ourselves faced with humbling evidence of how unproductive our adolescent years were with Grindcore: Cut n Paste, a spin-off exhibition from Capsule’s Home of Metal project devoted to documenting the infancy of Brum-grown export Napalm Death. For infant, read positively fetal: founder members Nic Bullen and Miles Ratledge published their snotty Anti-Social zine when they were just 11, with Napalm Death forming shortly afterwards. It’s lovingly presented here along with early posters, photos and tape covers, as the band’s classic act of sonic projectile vomiting, ‘You Suffer’, plays on a loop. Nic Bullen pops up again in the afternoon on the panel for A to Zine, an intriguing talk delving into the history, ethics and wonky typography of zine culture. But we have to sneak out before the end so as not to miss French violinist Agathe Max, who, with her loop and delay pedals, repeatedly conjures up a kaleidoscope of circling strings then darts lightly in to waltz around versions of herself with a sepia-toned grace that recalls Max Richter but also hints at something less refined, more elemental.

Lured in by the programme book’s promise of ‘placid Moog tones’ and ‘blissed-out space-rock’, we find Antilles to be less a Klaus Schulze-soundtracked drift into the arms of the Milky Way than the kind of pounding throb your blood might make in your ears in the few seconds between your space helmet cracking and oblivion. Wolves in the Throne Room may be Olympia’s premier eco-themed black metallers, meanwhile, but the Weaver brothers are blissed-out in their own way, with guitars that ascend like a slain hero into a vegan version of Valhalla, before melting into meditative oneness with the synths and dry ice. Over in Boxxed, LA duo Lucky Dragons are presenting a kind of interactive sound-shaping experience involving a camera, two large, stripy transparent sheets and a bunch of enthusiastic audience members taking turns to move them around. Sonically, it doesn’t seem to be having that great an effect upon their multilayered, benignly shimmering Max/MSP-processed electronics, but hey, everyone’s having fun.

Archivists of Ozzy’s most addled and paranoid thoughts, Electric Wizard have been polishing their riffs with Satan’s underpants until the likes of ‘Black Mass’ suck all remnants of free will and coherent thought into a choking purple vortex. But then we remember about Alexander Tucker and, using our last remnants of motivation, we escape to the theatre, where we find that Kent’s finest psych-troubadour has kindly donated his slot to Swamp Thing’s furry cousin, a yeti with twinkling LED eyes. Hunched over his electronics, the nameless beast summons up a version of Tucker’s Dorwytch songs as heard through a brackish pool in some forgotten coppice, all looped strings and semi-wordless vocals and incantations to the mischievous beings who haunt leafy lanes. One of his eyes goes on the blink by the end; it’s that good. Alas, the demand for doom tuba ensembles proves to be greater than anticipated, so we’re unable to fit into the theatre to see Ore. Pekko Kappi is a pretty neat alternative, however, pulling heartbroken howls out of his bowed three-string lute as he rampages through a collection of Finnish songs about Siberian prisons and women who boss the demons around in Hell. Drum Eyes, too, look as though they know a thing or two about keeping demons in line: their set may not deliver quite the same three-button fireball directness as DJ Scotch Egg on Friday, but Ishihara’s air-crushing bass and the often-unison dual drum assault provide a weighty core of slowly churning magma to the more freewheeling sparks from guitarist Kai Wong and violin/synth/wailer Kathy Alberici. Until the end, at least, when neo-Tokyo collapses in on itself, leaving just a massive pixellated crater with Ishihara jumping impishly around at the bottom.

What with Tony Conrad’s position as a godfather of ‘dream music’, scourge of the epilepsy-prone with his 1965 film The Flicker and one party in a famously intractable beef with fellow avant-garde stalwart La Monte Young, we wonder if his solo violin set will prove to be an endurance test. Instead, it’s one of the festival’s most elevating, with the behatted Conrad presenting a sage, considered figure as he layers thirds and fifths into an ever-changing landscape of harmony.

Next, the only truly irksome timetabling clash of the weekend means that we have to choose between Fire! and Silver Apples: age wins out and we’re treated to a slightly ramshackle but endearing appearance by the Apples’ surviving member Simeon. Having reproached a too-quiet oscillator, he then battles an unwieldy mic stand – “Are you friends with this guy?” – before folksy, modest Simeon steps aside for the spooked, intoning Simeon whose staring expression and renditions of ‘A Pox on You’ and ‘Oscillations’ still sound like transmissions from beyond the end of the frequency dial. Normal-Simeon looks touched by the warm reception he receives at the end.

Back in Boxxed, we willingly submit to a two-headed beating from the founders of minimal techno label Raster-Noton. Alva Noto’s set is as stern and punishing as anyone could wish for, music and visuals – which have been consistently excellent throughout the weekend – combining for an onslaught of corporate facelessness as ‘Uni Acronym’ reels off a hypnotic alphabet of three-letter brands. Byetone may be fractionally less austere, but proves just as adept at pumping the last vestiges of energy out of the crowd, ending the weekend on as fine a collection of low notes as you could ask for.