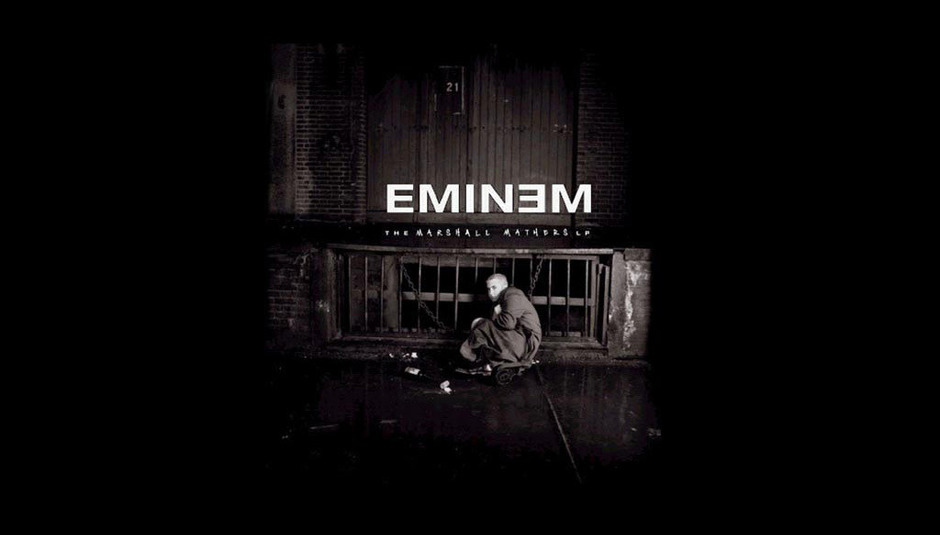 "Slim Shady does not give a fuck what you think…"

In a world subsequently traumatised by 9/11, desensitised by viral video and gradually acclimatised to real-life brutality and sorrow on our screens, it’s hard to recall the sweeping tirade of outrage and horror that accompanied the release of Eminem’s second album back in May 2000. The pious wrung their hands in exasperation. The tabloids pleaded the Home Office to ban him from entry. The great and the good shook their heads, expressing disgust in neat soundbites. As for Eminem? He opened his UK tour in the winter of that year wielding a hockey mask and chainsaw. The ultimate suburban parent’s nightmare, as so many others had been before. He was a showman. And he knew exactly what he was doing.

At the time of release, I didn’t know hip-hop, wasn’t wise to hip-hop and frankly, the whole concept of the record seemed ugly to my bland, Britpop-honed sensibilities. And even now, The Marshall Mathers LP is at times a profoundly difficult and unsettling listen. There is incest (‘I’m Back’); there is rape (‘Criminal’); misogyny and homophobia (‘Kill You’, ‘Marshall Mathers’) and within pretty much every single song, someone is beaten, flipped off or labelled a “faggot’, ‘slut’ or ‘whore’. As if that’s not enough, ‘Kim’ - a horrific 5 minutes in which Eminem kidnaps, murders and then buries his wife remains close to unlistenable. But there was something in there that grabbed me from the first moment I was woken at 4am by my flatmates playing ‘Stan’ at top volume on repeat in my first year flat at Birmingham University (we’ve since become lifelong friends…I wanted to kill them at the time). There was honesty, a style and above all, a kinetic energy that was unlike anything I’d ever heard before. Within weeks I was buying Public Enemy and A Tribe Called Quest. My love of hip-hop grew from hearing this album. It was that kind of record.

None of the screaming headlines and general outrage however, would have existed or mattered (it’s not like these issues were anything new in hip-hop) if it wasn’t for the fact that Eminem’s rhymes were delivered with an astonishing skill, flow and wickedly dark humour that few could compete with. Even more so than in guitar circles, hip-hop fans are reluctant to credit commercially successful rappers but you’ll find few people who refuse to acknowledge Eminem’s skills. In full flow and flight, he was almost untouchable. Listen, for example, to the second verse of ‘Marshall Mathers’ where he obliterates Insane Clown Posse with such snap, venom and dexterity that your jaw genuinely falls open. He built a good story too: ‘Stan’ is expertly paced. ‘Bitches Please’ is a brilliant tag-team rap where Dre, Snoop and Xzibit line ‘em up before Marshall brilliantly knocks it down. And whisper it quietly; it’s actually pretty hilarious at times (the “how am I supposed to send this shit out?” bit from Stan still makes me laugh out loud – there was humour even in the darkest places). The main reason that the media and authority figures paid so much attention to the record was that its influence was reaching so quickly through playgrounds, bedrooms and the charts. Its influence spread because it was a brilliant record that people identified with; whether they were black, white, hip-hop-heads or pop fans. People don’t make a fuss about things that don’t shake their perches. And The Marshall Mathers LP didn’t so much as cause a ripple as dynamite the pond, set fire to the rubble and proceed to club all the fish to death with an empty cognac bottle.

With hindsight, what made The Marshall Mathers LP so groundbreaking was summed up in the ‘Steve Berman’ skit, where the protagonist admonishes Em that: “You know why Dre’s record was so successful? He’s rapping about big screen TVs, blunts, 40s and bitches. You’re rapping about homosexuals and Vicodin”. For 5 years before the record arrived, that’s what hip-hop had become: a non-stop bling carousel with diminishing artistic returns. By flipping the genre on its side with a mixture of Grindhouse horror, twisted humour, barroom psychoanalysis, pop suss and exceptional technique, Eminem managed to achieve commercial success while breaking down the boundaries and conventions of hip-hop. And frankly, no-one has come close to it since (though the platform used for Kanye West to exorcise his demons as he did on My Beautiful Dark Twisted Fantasy was undoubtedly laid by Em). Certain issues still nag; lyrically, it remains at times a deeply questionable album (though it’s certainly less repulsive than NWA’s Efil4zaggin a decade earlier) and some of the “faggot” and “slut” lines are simply too unpleasant to wave aside. Despite the justifications, I’ve never bought the whole ‘cartoon violence’ excuse: Marshall Mathers mind is dark and diseased. But then again, so are plenty of our own. And as he himself proclaims in ‘The Real Slim Shady’ “I’m like a head-trip to listen to / Cos I’m only givin’ you things you joke about with your friends inside your living room”. In retrospect, he was probably on to something; the decade of reality TV that followed proved that society’s capacity for humiliation, degradation and sexism wasn’t confined to inside the head of some white kid from Detroit. Would we really be as shocked if it came out now? I doubt it somehow. At the turn of the nineties into the noughties, mainstream culture was relatively naïve; prim and proper. In many senses, this album was a portent of how things would change. But it certainly wasn’t responsible for it. Its ethics do still weigh it down somewhat, but it’s simply too thrilling, fresh and unique an album for it to be significantly restrained by them.

The Marshall Mathers LP still sounds macabre, dangerous and brilliant to this day. There was a remark doing the rounds at the time: “Isn’t it strange when the best golfer in the world is black and the best rapper in the world is white?” Both Tiger Woods and Eminem have had their own particular falls from grace since those halcyon days but at that moment, Marshall Mathers III was in a class of his own, both as public enemy and as pioneer. And in all honesty, we haven’t had anyone like him since. An album as important culturally as it was musically, it defined a moment where an artist pulled a distinct cultural gap between young and old for the first time in years. We need someone like that to shake everything up once in a while.