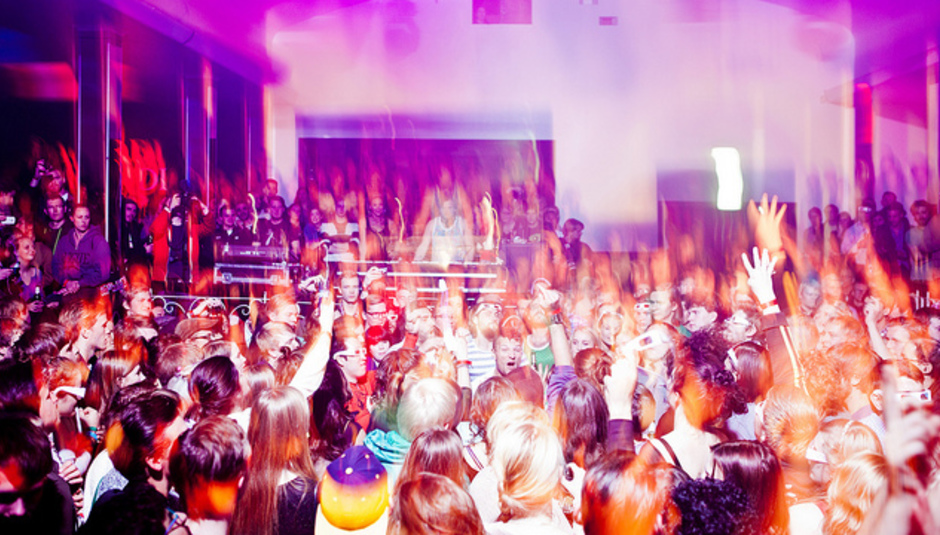 There is just something about Iceland. In reality it is not one single thing but a combination of things; from the people, the weather, the city of Reykjavík itself and, above all, all of these distilled in a few days in the middle of October that make up the annual Airwaves festival. Although 2011's edition was marked by a couple of performances of Björk's Biophilia at the resplendently-designed and long-awaited Harpa Music Hall, it's arguably not what Airwaves is about. That said, every festival is helped by a "marquee" performance or two and Sinead O'Connor made an appearance this year, too.

With all these people descending upon this far Northwestern European outpost to see all the acts who likewise descend or come out of the woodwork, it'd be silly not to maximise the potential for actually seeing these bands, in a variety of places. Therefore, there's probably only a handful of acts on the bill who only play once. Regardless, the point is that if you really want to see something you can, and the off-venue program is almost an equal to the "main" events. These off-venue activities start a little earlier in the day, finish a bit earlier, and are in perhaps slightly more obscure nooks and crannies of the city: see, for example, the Live Project 18 House Party on Ingólfstræti 8, which is just someone's flat. Nice, though.

The first thing which enters my ears on Thursday is at the newly-opened and rustically furnished KEX hostel, where Jóhann Jóhannsson and a few others play among a ebbing-and-flowing crowd, a bookcase or two and people munching on bratwurst. On harsh reflection, eating a bratwurst at the very back of the hall/bar where this is happening is perhaps not the best way to sample this canape of string-based instrumentalism, but it certainly was the best way to eat.

Next up is Ólafur Arnalds who today doesn't sound very much like himself. The reason for this is that he, quite literally, is not. It's Mammút taking his place, who add a bit of life to the surrounding area with something approaching a heavyness, and very much smack bang in the middle of wonderful, even from relatively afar. There's also a twist of Icelandicism with a vocalist who - to be terribly crass - sounds a bit like Björk. You don't need to see this, just hear it, to realise that there is something here.

The range of venues on offer is vast and varied. The Reykjavík Art Museum (or Listasafn in Icelandic) becomes a personal favourite. From the photo in the programme (and also here), the main hall looks very much like a prison hall, with white walls and a second and third story balcony around the narrow, oblong shape of the room. Once you get in, though, it's transformed (still with a vague air of jail about it - creating it a bit of "edge", Folsom-style), especially with the orchestral, dramatic brilliance that Hjaltalín are playing out, in distant, smoky-red shadows. My arrival is too late to see the vast chunk of their show, but a blast of 'Suitcase Man' at close to their best, with its heavy cadences is enough to remind us of how intricate and special each of their songs actually is.

One venue which doesn't hold the same level of majesty is Amsterdam. It's a bar. Or technically a cafe. But there's nothing wrong with that. There are, however, quite substantial sound issues that cause a few problems for borderline offensively-named locals Fist Fokkers, who held a poll on what songs they should cover in their set. These include 'Sabotage', which suits them well enough, and Sinead O'Connor's 'Nothing Compares 2 U' which...doesn't, so well. Occasionally things which are on the surface quite dreadful can be enjoyable. This is one of those times, confusing though it is. Deathcrush, however, are hampered moreso by technical problems, almost terminally. For A Minor Reflection - again in the Art Museum - do conjure up wonderful soundscapes, if you so wish to label guitar-based post-rock with large crescendos as so. Plenty of bands I bump into over the weekend are keen to profess that their band is labelled post-rock but take their influences from a broader range of genres. That may well be true, but if there is one band here which fit into that aesthetic it's this lot. The sound itself is impeccable. It's not especially exciting, but the ups and downs are well placed and seemingly carefully thought. They could go far.

Following a day trip to the Greenhouse Studios - home of the best record label in the whole of Iceland and maybe even the entire world, Bedroom Community - again the Reykjavík Art Museum becomes something of a base from which to launch. The less said about Agent Fresco the better. Not even numerous, repeated shots of the local Brennivinn makes this remotely bearable. Dungen, however, are a bit more accomplished but once someone mentions Jethro Tull, it's hard to get it out of the mind. Impossible, in fact. Still, their extended rock and psych jams take me to a happy place (and the '60s), even if it's evidently not having the same effect on those directly around me. I guess it does drag a bit, or maybe they are baffled by the Swedish, or something? Wandering through a bit of rain and ice-cold wind is a necessity at this time of year if you want to get anywhere. Where, exactly? To the Iðnó, where merchants of nice Lay Low are playing in the middle of a very nicely furnished halls, with some of the nicest cornices I have seen in this country. Nice is pretty much a good summary of the band, too, who do seem to lack a bit of edge tonight. Certainly, I remember their country-tinged, acoustic-led laments being a little more punch than this on record. Still, those cornices...are very nice.

Punch soon follows, though. It might be difficult to really explain the excellence of legendary Icelandic heavy-rockers HAM without actually watching them play live. Because this is where they come into their own as one of the world's best. The general appeal - heavy guitars, dual vocalists; one gruff and one almost Pavarotti-esque and both singing in a pummeling, incessant tone - is clear, but their true excellence isn't revealed "on tape". Here, in another grand hall it is again revelatory. There's a new album on the way in this, their comeback. In between every song the phrase "Við erum HAM, þið eruð HAM" is spoken. This means something like "We are HAM, you are HAM", but I had no idea at the time. In between that there are chants of "HAM, HAM, HAM" ringing out too, just like a real rock concert. This is real, no doubt. And exhilarating. The program jokefully notes "If you miss this show, kill yourself". A little extreme, but not far off the mark. It has been said before that what people think to be the "Icelandic sound" may not be entirely reflective of the country's musical output. You know, the whole "angels crying tears of liquid gold" thing. Regardless of whether this is a) completely true, b) quite true, or c) not true at all there are plenty of bands shamelessly mixing styles with end results that are often great fun and occasionally just simply great. One of these is Útidúr, whose 12 members stand shoulder-to-shoulder and toe-to-toe on even a reasonably-sized stage. They manage to mix lounge music, pop-rock, Balkan-influenced sounds (horns a-plenty!) and other bits and bobs with a great level success. Their album, which I was earlier handed, also has a cracking front cover.

The Saturday presents something a bit more low-key. Finally the aforementioned Party Flat is breached after standing on the street drinking and bumping into people. As you would expect with a show being held in someone's front room, there ain't much space to stand, or even raise your bottle. Other than HAM, Æla are probably the the biggest highlight. Totally raw, almost exclusively in Icelandic and loud enough to deafen from a distance, even without amplification aids. It's kind-of bass-heavy but just heavy, generally, channeling stuff like Scratch Acid, Shellac, Big Black or even S.H. Draumur if you want an Icelandic reference...that sort of thing...with some melodic breaks. But don't let those interludes fool you. Æla will blow your brains out if they want. Again, it's more difficult to get a few yards down the street here without seeing someone you know. No problem. This is how the delay in getting to Kaffibarinn for Ben Frost's Music For Six Guitars is explained, anyway. Unfortunately, I arrive with the place in near total-darkness. The reason? A blown fuse. Had we arrived 5 minutes earlier we could have seen and heard something very special. This was a total shame.

Borko is a fairly rotund, bearded man who also plays in FM Belfast and tonight he plays Bakkus with a band bearing his name. I suspect many might describe the music as "post-rock without being post-rock", but that would do a disservice to all the things that it is. Brassy, slow-paced and purposeful and with an absolutely incredible drummer. What I briefly hear, too, straddles that line between joy and melancholy, with one foot either side.

My Airwaves begins to draw to a close with a slightly baffling Austra performance. Perhaps the most entertaining thing was the debate before and afterwards on how to pronounce the band's name. I don't know what those two girls by Katie Stelmanis's side are for. Does anyone? If I were to get a bit closer would it all become apparent? Oh, they're providing backing vocals. Regardless, it seems all a bit fluffy and insubstantial, although you simply cannot deny how great a tune 'Lose It' is. That'll probably never be topped and tonight it is a reflection of that, despite personal inertia. On reflection, it could have been the case that Austra were significantly better than my memory permits, and that they were blown away in comparison with GusGus, who follow them with their pulsing and ambient dance music, with eerie vocals. That much is likely. Anyway, GusGus tonight are intense if not insane and justifiably loud. They've been going on for a long time (1995, I don't mean since midnight...) and now have some new faces on vocals, like Högni from Hjaltalin, who does a superb job at strolling around stage with long locks, looking otherworldly, especially amidst the haze of smoke and bass. There's a certain sadness which pervades their sound, yet one punctured with euphoria. It's a glass half-full type of situation for me, and actually a glass-overflowing situation for those at the front. It's good to end on a happy note.

Of course, you can and do go on into the night after the music has ceased, cramming into various bars and pubs wondering if there is any place in the world like this. The streets are then almost as filled as the bars and it's a familiar a scene as towns and cities a thousand times over. Familiar, yet strange, and warming. But, you know, deep down that it isn't really the same, because there is not any place in the world like this. Airwaves really does catch Reykjavík in its best light.

More photos from Iceland Airwaves 2011 in our gallery.