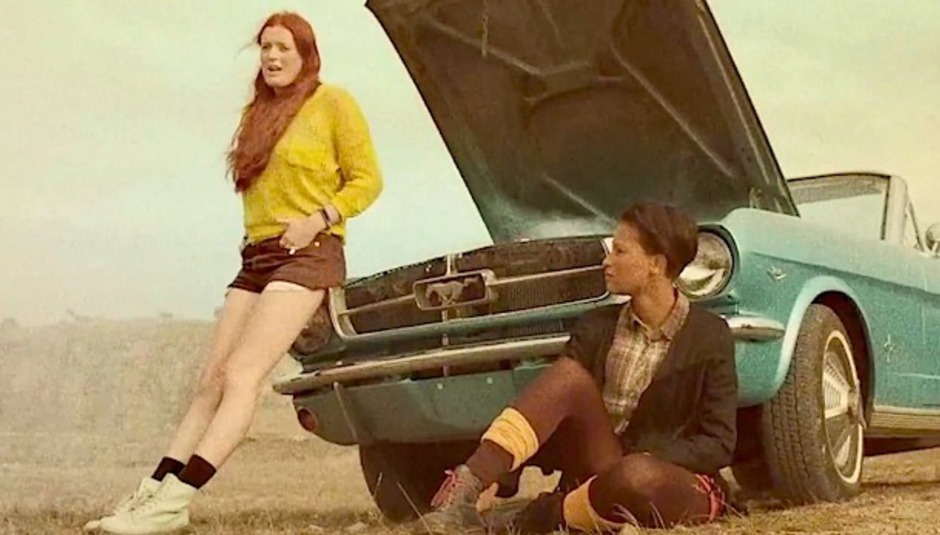 Roby is roaming the Irish countryside, so Jazz Monroe has stepped in to do(!) this week's singles...

With some relief, I can report that there’s been a plastic cascade of superior sounds for me to choose from this week. Meaning even the ones RIGHT at the bottom deserve a congratulatory kind of pat on the back. Or at least a fond glance.

So then, this week’s is a column of maternal murder, hyper-specialist musical terminology (“staccato”!) and waaay too many exclamation marks.

It’s with fondness that I look back on a time - let’s say the age of 15 - when the open appreciation of 'pop music' was considered some sort of faintly embarrassing vice. But then again, to a degree it still is. This is totally daft considering the breadth of the thing - marvellous, enthusiastic, monstrous, undisciplined, greedy, nasty, deceptive, joyful Pop Music; Pop Music in all its flawed forms, preferably at once - it comes on strong and teases and wanes like addiction to a particularly noxious narcotic, but whose ill-affects are completely imagined. And while there are those veterans of oneupmanship who’ll swear blind they once survived lent on nought but the grisly remains of an echo previously retrieved from somewhere inside Stephen O’Malley’s beard, it is an inherent addiction, pop music’s, and quite probably one that everyone would best choose to embrace entirely or else shut his trap about forthwith.

That’s where Icona Pop come into play; the Nicorette lollipops of musical virtue. Whether weening oneself on or off, the jump leads are set precisely in place: a jaggy, synthy undercurrent, flamboyantly thrusting itself here and there, boldly exciting your ear’s most wormy inclinations. And lyrically, it abandons all its mortal insecurities, replacing them with a positive veneration of the Present - a reverence so drunkenly compelling it has, allegedly, already inspired the collapse of three major religions. Yes, ‘Nights Like This’ is top larks, everyone, cleverly spinning some wicked modern metaphors about alcopop-induced photography round a swashbucklingly sociable chorus, with a vocal by turns irresistibly seductive and hair-flingingly brash, fearsomely forward and terrified of tomorrow. Top Pop! It’s (probably not) gonna be MASSIVE, don’tcha know. (These things barely ever are.)

You were grinning and winking and trotting out some brilliantly outlandish moves as the DJ whacked on ‘Sun Too Bright Turn it Off’ by Slugabed, but then some callow-eyed white fella standing next to you with a checkered shirt started shouting “SHALL WE FUCK OFF TO VODKA REVS?” into his depressingly sober partner’s ear, abruptly cramping your style. “THIS IS SHIT,” he then lied. Pfft. “That guy’s so wrong,” you grunt, briefly wondering why your friends have now gone over there; silently weighing up whether it’s too early to get a mixed kebab. This, enraptured readers, is a head-squeezingly fluttery, fidgety, stuttery, utterly hench instrumental space-jam released on Ninja Tune - Ninja Tune! - so you should hardly need telling it’s the bee’s absolute knees, served cool as Steven Ellison’s couscous on a sexy platter.

The Leisure Society - ‘Dust on the Dancefloor’ (Full Time Hobby)

There are people that dislike the Leisure Society, apparently, but I am yet to meet one. What happened when I went last week to Norwich cathedral - which I can tell you, is an astonishing stack of rocks, not to mention proud owner of this island’s Second Highest Spire - was of no small wonder: their lush acoustics, holy heartiness and godly grandeur automatically consumed my notepad with dramatic revelations, such as, ‘billowy vocals’, ‘a sort of pastoral Fleet Foxes’ and ‘they are well Norwich, even though they are from somewhere else’, as if my pen were guided by some higher force. Well, ‘Dust on the Dancefloor’ sounds even less like Fleet Foxes than usual and yet more pastoral, rather evoking Belle & Sebastian playing games under a parachute with the Shins somewhere in Kendal, which some will regard as the height of insufferability, they being people who have the twee-fear in them. I - quite confident of my own, adamant atweeism - initially suspected ‘Dust on the Dancefloor’ was dedicated to the persistently unsexy sorts who, being to dancefloors what pianos are to old people’s spare rooms, are always present but never to be touched; perennial dust-gatherers. Without much corroborating evidence, though, I will simply confirm that this is not only a record of extraordinary pleasantness, but a single that crushes - crushes those annoying pimples of depression which pleasantness is wont to exacerbate - beneath its own, swoony majestic splendour; a flowery cascade of tumbling goodwill and guitars who are, if not total softs, then actively charming and integral members of the community. It’s no secret, really, that there are people that dislike the Leisure Society, but frankly, I’ll be having nothing at all to do with ’em.

“I am the loneliest climber of them all” grumbles a man on side-A, sounding like him from Timber Timbre locked up inside the devil’s brass section, waltzing towards his hunger strike’s logical conclusion and being so overdramatic about it. Even better is the flip: ‘Run Away’ is served with not so much a glaze as a fillet of reverb, tempting reluctant comparison to a certain psychedelic indie-rock bunch, but be fooled not - it tries half as hard as that lot in all the right places. Like a modern-bomb disposal squad who do not know which wire to cut, the Rochester, USA-dwellers - a collaboration comprised of DM Stith and people you might know from the Earlies, the Late Cord, My Brightest Diamond and [YES] Shearwater - barely break sweat, valiantly slicing through the red wire and striking something wonderful. In fairness, they have probably got the wrong one, judging by the bits of clattering xylophone, tribal drum and bell chime all hanging off the walls, but you know, that’s okay. A clutter of carefully selected excesses.

Ebullient mumblecore from naggingly brilliant Scandipopsters, via one electric, squelching chord progression fed through a sodden wellington boot, and another preposterously catchy synth hook lazily pottering about the foreground sometimes, just when it fancies it. What these young Norwayfolk have done with ‘Det Haster!’, or, ‘It’s Urgent!’, is played it cool, ironically, and that is good because most of pop’s music people these days are dead-set on over-emoting, promiscuously launching the restraint of yore to the skies, firework-rejections of human ordinariness. Oh, Casiokids, you clever bastards. How I do long for your new full-length, with its admirably unpronounceable title, due January 16 2012.

They told you Peggy Sue were down and out for the count, but Brighton’s new gloom-mongers - ex-Mumford and Sons tour-partners, no less [“Can everyone please shut up about Mumford and Ruddy Sons” - Peggy Sue’s PR] - with Song & Dance have perfectly captured the phenomenon of feeling gracefully suspended in mid-air, flung from a fourth storey Victorian window, a weaselly husband’s sinister work finally complete. And it sounds fantastic. Cramming into three and a half minutes every stray mind-horror said plight would incur, the trio land gracefully in the musicland of everyone’s sixth favourite post-hardcore merchants Q and Not U. Then peek at a few bits of Slint’s homework, which you understand is far from an arrestable offense. Admittedly, the focus group gothic signifiers are out in force, but it’d be harsh to jip Peggy Sue’s conviction: their strength lies in telling, not making stories. While one ear hears the schizophrenic cries of a wrong-headed worrier, what thrills is the contrast with her tormentor, a calm, slender apparition, lending proceedings only the thinnest topping of Chill. But it is perfectly enough. “On all Hallow’s eve / We tried to believe / That somewhere between / The tricks and the treats there was something to keep”, the girls chirp morbidly in tandem, like a volcano-eyed mother, zanily grinning with delight before, finally, smothering her first born in the cot. Oh, the LOLs! Whoever said singles have to be fun? [Nobody said that, that’s not even a thing - rhetoric police]

Hrm. Despite being from our Norwich, and therefore a local band - ergo, bobbins, natch - this appears to be actually a bit decent. Falling somewhere soft and sorry between the Young Knives and Sufjan Stevens, ‘Wake Up Old’ - presumably referring to the sudden onset of type-one twentysomethingness; crushed dreams, two kids, mortgage and all (yawnyawnyawn) - their debut single for Barely Regal is an uncommonly substantial emotional thing, twining spendthrift optimism into its mathy lattice of mellow. Alas, like all those other silly bands bobbing angularly about behind the mighty Bearsuit’s speedboat of awesomeness, it even squeezes in a Norwich-stylee staccato breakdown at 2:30. It’s fine, it’s fine.

Sonic Youth Gone Pop! Slow Club Playing With Matches! Other phrases that mean cock all. Like the rest of The Kills’ intangibly not-quite-thrilling indie rock fare, this is something-tinglingly good, but it is also true that I shall never listen to it again.

Thoroughly delightful folk number crawling the streetlamp-lit curbs of its disappointment, in the adequately-warm early hours of an ordinary Wednesday.

Yes, this is pleasant enough to get away it, I think.

They sound a bit like a rapey Muse, don’t they.

Rumour has it fashionable facial foliage is on its way out, Fyfey boy, and your Guillemots lot’s not-exactly-rabidly anticipated new single may well follow. It hovered over the whirlpool of Mediocrity quite too long; it could not help losing balance, gusted away on a Mind-Numbingly Tedious zephyr and spiralling into the raging oceans of Is Anyone Really Still Listening Any More? Unamazingly, ‘I Don’t Feel Amazing Now’ is as flimsy as a thin paper aeroplane being flung successfully into a Radio 2 boardroom, and a bit more earnest. Honestly though, mate, you seem really nice on that Twitter. Fancy a drink?

I really tried to enjoy this. Let me stress that it’s probably me who’s failed here, not ‘Hurricane’/‘Johnny’ by horrorific punk sorts The Coathangers, the second release from X-Ray Recordings. That’s a corker.

Some fellow moonlighting from space-bar renegades 65daysofstatic. Perhaps this - Polinski, that is - is a concept project based around a former leader of the Khmer Rouge, who has somehow become trapped within the confines of a nifty transport device designed for snowy terrain. You just never know these days.

I think Wendy’s fond of this one. But, why? While impressive, in a way, said impression is basically akin to watching some planets mindlessly wafting round outer space in dull circles. Oh well.

A bit like Sonique with sedatives in her, this. I can certainly live with it, all dressed up in sparkles and howling and neon as it is. Wait, did someone say something about Sonique? Get out of here. No way!

Yeah yeah, she’s back next week guys, don’t cancel your ruddy subscriptions or whatever. I’ll be here if you want me, pulling bits of single out of my hair and body.