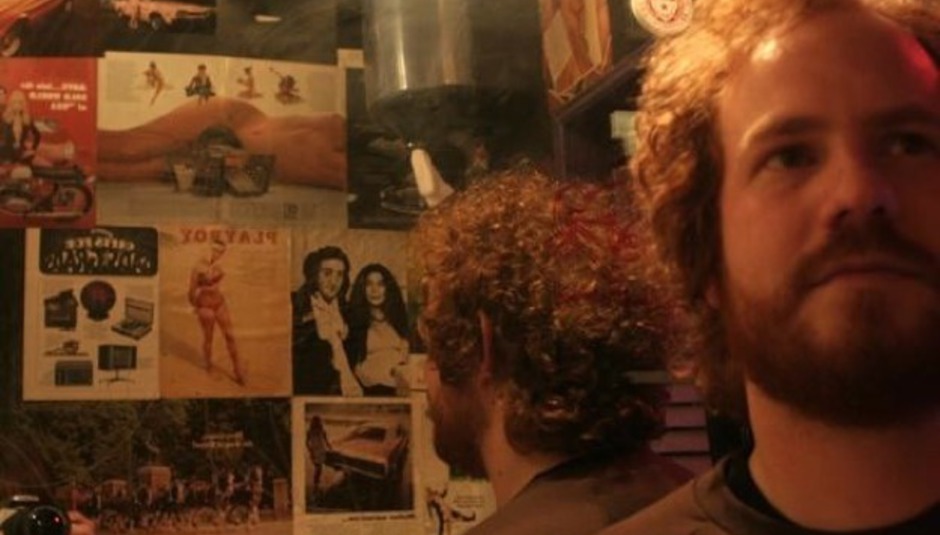 Opening this month’s column is an interview with Lawrence English, undoubtedly one of the finest artists operating within the contemporary ambient/drone field, about his outstanding new record, The Peregrine. Many thanks to Ed Benndorf – and to Lawrence – for organizing this interview.

You can catch up with all the past Articulate Silences, Ambient Sounds columns here. DiS: You mention that The Peregrine epitomizes an obsessive rendering or landscape and environment. Given that you've never visited East Anglia, how does the landscape inform the album?

The most direct way the landscape impacted on the record was taking compositional cues out of Baker's writing. Elements like the motion of elements in the book, the shape and descriptions of hills or the textural quality of various spaces all directly shaped the composition and sound choices. His descriptions of sound are so imaginative, that it's easy to draw great inspiration from them. It was in fact this sense of sound in his writing that first attracted me to the book. He captures a very special and suggestive quality of the sound environment with his prose.

How do the titles relate to the music? Is there any attempt to convey a narrative arc throughout the course of the album?

I wanted to in some respects create a homage to the book - so there's certainly a sense of the narrative of the book in the flow of the record. It will of course be different for everyone who reads the book, but I sense in Baker a distaste for the invasion of the human - both within the 'natural world', but also the human sense to romanticise the living world. I'm always impressed by his ability to translate what he experiences without getting sentimental or romantic about it. No matter how beautiful the descriptions might be, at no point does he fail to acknowledge the true intensity and brutality of the world around him. The titles are drawn directly from each of the months of the book. I chose them as they in some way shaped the composition or the choice of the sounds. Some passages from the book I found profoundly moving and some of those informed the choice of titles. I don't think I could ever convey the full impact of the book in sound, but I do hope this is an introduction to for people to discover Baker's writings.

Could record be regarded as a 'soundtrack' to the book, or is that too simplistic a view of the relationship?

I'm not sure. Actually I've been discussing this idea a lot lately - why there's not 'listening states' that accompany books more often. There's issues of temporality and the ways in which people choose to read vs say listen to music. I'd imagine that the two could go hand in hand to a degree...but I think they also exist exclusively....like distant reflections of one another.

A lot of your records seem to interrelate with and resonate with particular environments (for example, Kiri No Oto, your use of field recordings more generally). Is that something you aim to achieve and if so, do you view The Peregrine as a continuation of that?

I do have a particular interest in landscape and areas in which the human plays a smaller or non existent realm. I think there's such an incredible complex world that surrounds us - more complex than we can ever perhaps understand and that's an idea I find very interesting. More often than not we choose to filter the world around us instead of tuning to it. So I think there's something interesting to be explored in the idea of trying to submerge yourself in these spaces and sounds. In regards to The Peregrine in some respects I do see it as a continuation of this exploration, but perhaps a sidetrack to the main approach....it's a different lens through which to explore that idea.

To me, it also sounds like your darkest and bleakest record. Is that simply a reflection of the material that inspired it?

Funnily enough I though parts of it were a little uplifting....that said I can hear the bleakness, which certainly is a reflection of Baker's writing particularly during the colder, harder months of winter. 'Frost's Bitter Grip' in particular reflects this. That particular paragraph from the book, where he finds a frozen (but still living) crane, I found quite haunting.

This is probably a reflection of my untrained ears as much as anything, but what instruments and processes form the basis of the album (I pick up a fair bit of guitar but some of the frequencies and tones are really otherworldly)?

Actually there's not so much guitar on there - in fact I'm relatively certain there's no guitar. I actually used a lot of strings, piano, organ and horns. I've really been enjoying working on horn arrangements and although they do end up being somewhat buried in the overall mixes, I think they do lend a lot of the tonal colour to the recordings. One of the recurring elements in the productions I am doing at present is this idea of harmonic distortion - both the acoustic/scientific effect and a more aesthetic approach of combining layers of distorted elements so they blur and merge at their edges.

The press for this album makes clear that it's strictly vinyl only. Is there any particular reason behind this?

This kind of comes down to a very personal experience this year. I ordered a record and then after the check out I realised there was no download available....so I waited for two weeks for the record to arrive. It felt like a long time since I had to do this. I reconnected with an appreciation for music that I haven't felt in a long time. There's something to be said for anticipation. When the record arrived, I put it on the turntable and listened from start to finish. It was such a pleasurable experience...in some ways choosing the vinyl only was a way of encouraging people to have that experience, and judging by some comments I've received that has happened, which is lovely to read.

Are there any plans to transfer The Peregrine to a live setting in any way?

There sure are. I am planning the first concerts in the UK and AU this month and in november also.

And finally what are your plans for the next year? Any other releases planned?

Quite a few projects on the way for 2012. Important will publish my Lonely Women's Club project debut. It's a focused minimal organ project. Also myself and Grouper are working on a gallery/performance project called Slow Walkers. It's something quite different for both of us, which is exciting. I'm also planning two new solo LPs - on that continues the seasons series and the other which follows up Kiri No Oto....I'll also be performing more pieces from the Monolith/Antarctica project with Werner Dafeldecker....hopefully a fun and busy year!

And so, to The Peregrine (Experimedia), a record which represents one of the finest pieces of work I’ve encountered in a long, long time. Operating with a series of bleached, weathered tones, English has constructed a searing meditation upon landscape and environment – certainly, you’d be hard-pressed to find a record that evokes a sense of space and place in such an intuitive manner. But ultimately, whatever the inspiration behind the record, it’s the emotional resonance of pieces such as ‘Frost’s Bitter Grip,’ with its vast washes of melody corroded into a single disorientating surge, that really serve to illustrate the extent to which English has mastered his craft. Scope the aforementioned track, along with a quite stunning video:

Similarly beautiful is the debut full-length from Yorkshire-based guitarist Dean Mcphee. A record of quite astounding clarity and restraint, Son Of The Black Peace comprises little more than Mcphee’s elegant, cyclical melodies and subtle, almost imperceptible embellishments of tremolo, reverb and delay. The results? Nothing less than gut-wrenching, as every string bend and pause is imbued with an almost unbearable level of pathos. And while Mcphee’s playing feels steeped in a trans-Atlantic folk tradition, it’s difficult to find any real precedents for the tone he imparts upon his work (certainly, he eschews any obvious Takoma school influences), leaving nothing more than four extended tracks of rare purity. Seriously wonderful stuff: Substantially denser is the latest release from Xela, the main project of Type Records founder John Twells. A crucial vinyl reissue, courtesy of the excellent Dekorder label, following a limited cassette run last year, The Sublime is quite possibly Xela’s finest work to date. Certainly, it would be hard to imagine a more effective evocation of Medieval doom than the desecrated tones and humid murk of ‘Eve’s Riposte’ but it’s the opening drift of ‘Lust & Paradise’ that really astounds, as a series of oppressive drones and shards of high-end ether gradually dissipate into an eerie calm, congealing around a single, desperately bleak melody. Check it out over at Dekorder’s soundcloud, and be sure to scope Jefre-Cantu Ledesma’s quite brilliant artwork, which adorns the sleeve (album cover of the year, hands down):

Equally (and perhaps unexpectedly) dark, is the latest release from former Slowdive drummer Simon Scott. Following the blissful clouds of fuzz and granular haze that characterized his debut offering ‘Navigare,’ it’s fair to say that few would have predicted that ‘Bunny’ would sound like the uneasy midpoint between Kreng’s sickly blend of jazz-infused doom and the astral projections of Windy and Carl. So while the album’s centre-piece ‘Radiances’ is pure early 90s nostalgia refracted through a post-‘Endless Summer’ lens, the likes of ‘Betty’ and ‘Gamma’ explore stuttering swing rhythms, blasts of savage distortion and almost Morricone-esque guitar lines. Heady, addictive stuff: By way of contrast, Journey Through Astral Projection, the latest release from the prolific Expo ’70 is, in many ways, exactly what you’d expect. That this comment is in no way a negative simply serves to highlight just how consistently excellent Justin Wright’s project has been over the past couple of years. Recorded at the same time as 2010’s fantastic Where Does Your Mind Go?, this is an album that explores similarly rarefied kosmiche atmospheres, without ever descending into the kind of bland new age pastiche that characterizes so many similar transmissions from the US underground. And when Wright’s guitar work is given space to breathe and he sends out sparkling flurries of echo-saturated notes, as on opener ‘Trajectory Rhythms,’ the results are genuinely revelatory. Check out the Immune records website for more details.

Finally, a release from the excellent Cylindrical Habitat Modules label – the debut full-length from South California’s Mirror To Mirror. While I’ve previously spoken of the synth-overload that seems to be clogging up so much of the US underground at present, ‘Here You Leave Today’ is undoubtedly worth checking out – much like the recent Emuul transmission from Digitalis, there’s a kind of soft-focus beauty to the record and a manifest desire to connect with the emotional potentialities of the synthesiser, rather than its more academic characteristics. Scope a preview right here:

Until next time, you can catch up with all the past Articulate Silences, Ambient Sounds columns here.