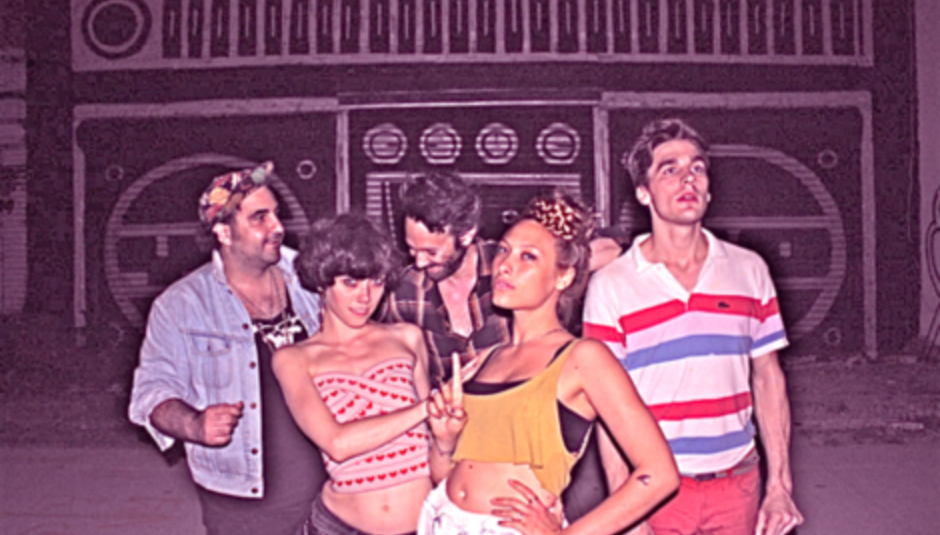 When Luscious Jackson’s strutty delivery met the teenage me we hugged too long and hard; it made them uncomfortable. But I still think In Search of Manny is a world-beater, its unapologetic, bristling confidence still gives me the squeals. Which is why it is nice to come across a band like Friends, with their dulled, ESG-o-like basslines and their pin-sharp neat syncopation. 'I'm His Girl' is sung in such a way that puts you in mind of girls whose only utterances are backchat; it is a single for which the word ‘sashay’ might have been invented and it is also - if we are on the subject of words - the sort of pop song that provokes a person to see if it might be possible to reclaim the word ‘sass’, after years of it being used to describe women in the dread mould of Carol McGiffin. For now, the exact route of the Sass Walk may have to be ‘the stairs’ or ‘the corridor to the bathroom’, and it may be a private sort of affair. But it will be no less spirited for that.

‘Black Cloud’ has the sort of overlapping choruses and verses that sound like each part of the song is having a sup from the hipflask, and it is neat, this; the way your ears follow one part along until another emerges, each one taking you by the hand so you can’t get lost. Images of fellowship are appropriate, because this has the sort of kindness of tone brasher, more vulgar bands would kill for, it has all the openness of group therapy but none of the attendant whine. As a giddy appreciator of minor keys and lightly-worn sincerity it is important to admit that James Bennett is definitely preaching to the converted. But I should not like you to think I am blind - ‘Black Cloud’ is hardly Friction by Television, but it is also not trying to be. All in all: rather darling.

As you might expect with a band on a label called Cherryade, this is self-consciously naïve to the point of making a family of papier mache pandas out of fanzines, and painting them with milk. It also has some METAPHORS about how, out of tiny worry seedlings, actual stress will grow. You know, growing, like plants. ‘Did you turn off the taps in the bathroom?’ ask The Lovely Eggs. ‘Did you get my girlfriend pregnant?’ they pester. ‘Did you remember to lock up the front door?’ they prod. And I want to hate them, really I do - I want to tell them I am a grown up woman who is PERFECTLY CAPABLE of turning off the ruddy oven. But they take the idea so far, it sort of swings back again, like some sort of concept boomerang. And so instead of putting their heads in the oven so THEY can RUDDY WELL CHECK if it is STILL ON, I make them a cup of tea. And try not to baulk when they ask for three sugars.

Needless to say as the basis for a life philosophy, this record is about as useful as a wheat allergy might be if you are a bit needy and want to feel special. It hates the womens (and/or sees them purely as a receptacle for its near-constant horn), and it is so in thrall to money I would quite like to take it for an edifying walk, read it some Donne and show it how reasonable the parma ham in Lidls is. However, as feminist blind spots are something one must always acknowledge - even if the first article a person ever wrote was about feminism for The Guardian women’s pages - I would be lying if I did not say I love this bloody racket, it has my favourite kind of echoing siren (that for now I cannot place, but which puts me in mind of Hijack) and production as crisp as a fifty. If Giles Coren, AA Gill and him that writes Downton Abbey were gathered together it would still be the smuggest idiot in the room, and I can’t forgive it for the line about how it ‘rapes’ beats. The continual, cheap overuse of the r-word in connection with nitwitted online networks is U-grade dim, as well as another reason why, when under attack, we’re meant to scream ‘fire’.

Is Tropical have done the worst sort of cake-and-eat-it video for their utterly quite two thousand and eighty song, in which images of a comely pole dancer (this video contains BOOBIES) are juxtaposed with footage of vultures picking apart a (BOOBLESS) carcass, and it is so DOYOUSEE it might as well be GCSE art coursework. The lyrics are no better, all ‘Too young to tell, too much of everything’ and ‘They don’t love you’ – all of which amounts to a song about as helpful and empathetic as ‘Roxanne’. As much as I would like to smash the Patriarchy’s back doors in, I don’t want Is Tropical’s simpleton fingers on the battering ram.

At first, I was all like Oh Dog, it’s a song about a ruddy cat. And then I was all a-thrall to the stop-motion charcoal illustrated video. And then I wrote ‘charcoal illustrated video’, and then I felt horribly self-conscious because so many of the things I claim to object to are the precise things I enjoy [See: attack on tweery above, from a woman who spells 'actual' with an 'h'). In any event, ‘Claw & Tooth’ is a simple, intricately-plucked, baroquely-layered, melodic pop song which you will thoroughly enjoy if you can get past the pronunciation of the word ‘kitten’ in the first verse. (I could.)

‘Indie Supergroup’ seems something of an overpromise for a band made up of them out of Comet Gain and them out of Crystal Stilts. But we should leave wor bitchiness behind when a Halloween release has been endeavoured with the glee this has - ‘Walkin’ To The Cemetery’ being the sort of spooky, ooky Hammond jam only joyless people with no sweets in the house would quibble over.

It’s a Justice song. That provokes people on the internet to write this sort of thing:

My problem is that I have got to the point where I am spoiled, I hear a delightful Gruff Rhys single and I think yes, yes, Gruff Rhys, this is all very nice but what else do you gots? It is either that, or he is a tiny bit too cosy - the sort of man whose songs are like electric blankets, mmn yes, a hug from mine own bed. But then someone swings a fat thigh onto your person and you are too hot and reduced to a get-off-me-mard. A bit like that. It's a nice song.

FTAM are Domino’s first ever French signing and really need to flick that name away or they will be filed alongside the likes of Erland & The Carnival, Esben & The Witch and all the other indistinguishable Girls Name + Quirky Concept bands that have become one morass of indie in my decrepit old ladybrain. There is no bloody excuse for any band being called Something Plus The Somethings now - especially when indie requires you to remember far too many things as it is; bass players in middling, six-out-of-tenners on Domino, colour of plimsoles worn by members of Radiohead, &c. In the video, a man smacks water as if it had done something well bad.

Mazzy Star are backbackBACK, and still the only song I properly know is Fade Into You. But given that everyone has been wildly ripping it off left right and centre for the last (oh Dog) 18 years, one can hardly blame them. Hope Sandoval still has a voice entirely her own, but ‘Common Burn’ is so crashingly pleasant and endlessly noodly I can’t give it a snog.

This is like, really old-sounding, you know? Like the sixties! Or is the seventies? One of those olden day decades.

Apparently this calls itself ‘lovestep’ and it really is quite good. But I am getting about one of these things a week, which almost, almost makes me sympathetic to the dubsteppers who have long declared the form dead. I realise I also receive about seventy six strummers and five-score shuffling indie poppers, but I also realise: this goes with the territory. I made my albatross a sling and called him Kyle a long, long time ago.


Every single frame of this video could be a photo post on a teenage girl’s Tumblr.

I’m not in the market for promcore this week. But if I were, I might (might) listen to this.