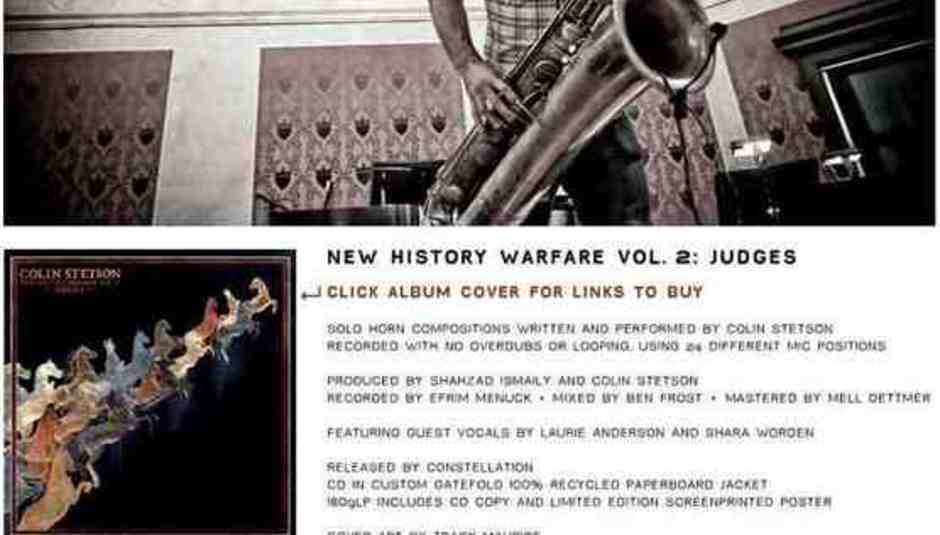 Colin Stetson - ‘Those Who Didn’t Run’ (Ltd 10” on Constellation)

I was always told the saxophone was the hardest instrument, which may be true. But I think it is more likely that this was said to we young, eager musicians because it was one of the most expensive; at St. Stab’s we ate gruel and Po Boys for breakfast, lunch and dinner (with a fight for afters). And so none of us were foolish enough to go home and demand a sax, apart from the posh kid whose parents sent him to our rum comprehensive out of sheer, heartening ideology. In any event, my friends and I learnt to play cheaper, plainer brass instruments, and eventually heard of this thing called circular breathing, which allows you to play forever; like a Red Shoes Brighouse & Rastrick. And all I know, is that it was impossibly hard, as difficult to master as physics can be to those who continually ask ‘Why?', or like being presented with Game Theory straight after you first blanket an abacus bead with your own drool.

I say all this because Colin Stetson knows how to do circular breathing which means he can make his music without overdubs or loops, and because we need to get this out of the way. So that we can then say ‘Colin Stetson knows how to do circular breathing AND’. It is the ‘and’ that is important, because terms like ‘circular breathing’ or ‘one-man band’ are too dull and grey to describe what is happening here; they can’t do justice to the competing rhythms, or the bleed of noise he is capable of making with his instrument while at the same time, the same instrument becomes a string section or harmonica; they can’t account for the rareness of texture he creates.

‘Those Who Didn’t Run’ is not Stetson's showiest work, it is a mood piece with a wavering bass pulse that keeps threatening to escape and let all the jazz monkeys out of their lab cages, but it keeps fumbling the lock. It is a ten minute exercise in remarkable restraint and control, and it is fucking marvellous.

An admirable 6 minutes unlike anything else in this week’s pile, ‘Easy’ is long on clinical electronic doom, it will have you rearranging the placement of verbs and nouns in your sentences before say ‘Kraut’ you can. There is also the sort of shout-out vocals which can remind a person strongly of buttoned-up, rigid 80s pop men in the manner of Phil Oakey. I AM EXCITED ABOUT YOU K-X-P, I COULD EVEN BE BOTHERED TO TYPE THE POINTLESS DASHES IN YOUR NAME.

I love Spank Rock but far be it from me to suggest ‘They hate us, cuz they ain’t us, and they ain’t us, cuz they ain’t shit’ has a McCarthyian simplicity about it. Instead, let me tell you how amused I am by an album title as unabashedly truculent as ‘Everyone Is Boring And Everyone Is A Fucking Liar’; and that ‘#1 HIT’ is a big, daft thing with a grotesque video in which someone actually vomits money.

Deerhoof feat. Jeff Tweedy - ‘Behold A Raccoon’ / The Raccoonists - ‘Own It’ (Split 7” on Polyvinyl)

Deerhoof continue their wonderfully wantable run of split sevens with Mr. Wilco and The Raccoonists. The a-side begins as minor-key, shuffle-pop but after a minute it makes a run for it, becoming something much, much odder; ‘Behold A Raccoon’ has no focus, is all spirit. ‘What is this thing called love?’ asks Jeff. To which Deerhoof seem intent on replying ‘Shut up Tweedy, we want to bash the shit out of these dustbin lids.’ This has about six middle eights [YES], and is excellent.

With a chorus of ‘They don’t like my bony body’ / ‘They don’t like my dirty hair’, ‘Honey Bunny’ is a flimsy triumph; the devil-may-care, barrel-drummed victory song of a hated, crop-top-wearing journeyman who is ignored by all the womens for at least one and a half minutes of this song. After that blip of agony, Our Man remembers how he once persuaded at least one beautiful person to dance with him - which is when this single goes all spot-lit prom snog, slowing to a waltz. Then it dries its eyes, does some more finger-swearing at strangers and ponces off into the distance, totally up itself. For some reason 'Honey Bunny' also reminds me of Prefab Sprout (no bad thing), but any band confident enough to release a song this determinedly throwaway, deserves to win hearts.

Although ‘The News’ begins with plucks as delicate as glass petals, whatever potion it has glugged quickly makes it woozy, and before long it is wondering if this is what is meant to happen and if those were really aspirin. And though it is as swirly and indebted to the darker shades of psychedelia as a band like Deerhunter, it has considerably more swagger; by turns employing screechy saxophone, lyrical sass delivered like Bolan (‘You won’t get far, with that look your eyes’) as well as actual shredding - proper, unembarrassable fuzzy jags of guitar. All in all, heaps of atmoss.

‘It’s Real’ does not upset any horses which is fine by me - Real Estate’s talent is to make merry out of a plastic bag that contains only drifty hi-hats, jangle, breezy melody and guileless slacker vocals that have never done a hard day’s work in their life. Of course with ingredients that overused, what should greet our ears is something as tired as beans on toast. Instead we have a single as pleasant as pie.

‘Bad Feeling’ sees Veronica Falls sounding like a girl-group Shadows with a little of the Monday Mondays about them. As far as I am concerned this is a tripling up of influences I can get very very excited about - even if, as a single, this is positively allergic to now. Three minutes, and leanly perfect.

Everybody knows that the kids love symbols, teenagers go mad for triangles and being unpronounceable is pretty much item one on the agenda in the sort of meetings where digital strategy and talk of ‘viralising’ music raises nary an eyebrow. As kicking against the binary pricks is largely pointless, no matter, Alt-J (WHICH IS WHAT YOU PRESS IF YOU WANT TO MAKE A TRIANGLE HAPPEN ON YOUR COMPUTER ALTHOUGH IT DOESN'T WORK IN DIS 'BACK-END' FOR SOME REASON) is here with ‘Tessellate’, the first release on Loud & Quiet and as such not a bad opening gambit; it being deliberately sparse and tinnily recorded before ranging off into the sort of seriously crooned ballad Owen Pallett might keep in his spares drawer. Not awful.

Spectrals - ‘Get A Grip’ (Wichita)

On which Spectral come over all doo-wop Arctic Monkeys, although ‘Get A Grip’ is more lilting and drifty than that would lead you to believe. Pleasant, with some very twinkly guitar lines.

Dale Earnhardt Jr. Jr. - ‘Nothing But Our Love’ (Warner Bros)

Rather like Girls, Dale Earnhardt Jr. Jr. do not take themselves too serious, which is why they are sporting fleece onesies and driving cardboard cars in their video. This may be a misstep as their song is a presumably serious, lovelorn, pier-organed and sepia-tinted sparklathon with a little of the Merriweather Post Pavillions about it (albeit nothing like so fierce). By all of which I mean, there are songs that it might be appropriate to present in a slightly daft way. And there are those where one gets the whiff of insecurity - as if Dale Earnhardt Jr. Jr. were not only eager to signpost their lowly family ranking in their actual name, but also a bit afraid of us guessing they are wet. Don’t be fooled, this is well soppy, but there's nothing wrong with that.

Herman Dune - ‘Be A Doll And Take My Heart’ (Fortuna POP!)

Dune is not conflicted, he knows what he is, what he is making, and why deliberately simple, sideways pop like his must be accompanied by a video in which a blue yeti goes skateboarding in Venice Beach. Good: at one point the yeti uses two skateboards, one for each foot. Bad: no John Hamm.

You have put chillwave in a flatpack coffin but when you unpacked the cardboard and the tiny bags of fixins you went too quick and dropped one of the nails behind a radiator which means it’s never going to go away and there's NOTHING YOU CAN DO ABOUT IT.

Wendy is on Twitter, here. She would beat you in a Pie-Off.