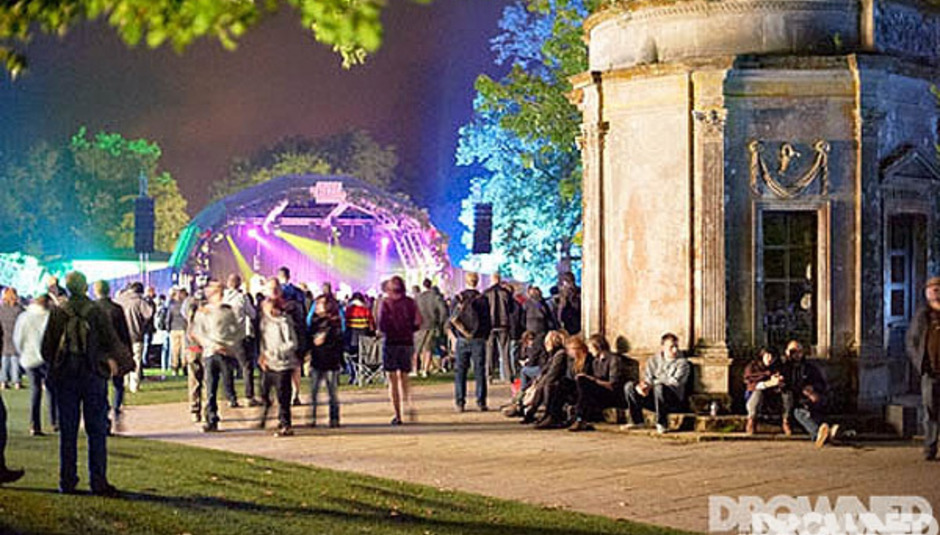 Here are some things that no-one tells you before you go to a festival for the first time: how your car’s GPS navigation system will take you down all the most winding country lanes to get there ‘quickly’; how far you’ll have stomp from the car park to camping site and how many stony paths you’ll have to tread in your flip flops on the way; the number of children that will be running in between your legs; how the locals will stare at you sideways if you swig from Strongbow cans, not bottles of homebrewed Scrumpy; and how everyone will be in bed before 2am. Oh, and how cranky your writer will be after all of these things slide into each other like a haven’t-showered-for-three-days clusterfuck.

What you do already know, however, is that, despite all of these things, End of the Road is a very lovely, very mellow festival. You can tell, because everyone has gentle woodcutter’s beards, has decorated carts in which to drag along their little Rories and Petunias, and some are even wearing those floppy fedoras beloved of Devendra, Serge and other music men rocket launched from the Victorian era into the future. And it also takes place in idyllic north Dorset woodlands, the Larmer Tree Gardens, which is overrun by exotic birds and dotted with antiquated buildings and secret springs, so it breeds the kind of peaceful, camping-chairs-lined-up-in-a-row-for-the-day oasis that keeps the gurn brigade away. So popular has it become since it started in 2006, that this year they’ve added a modest main stage and upsized by some 4,000 people. It feels full, but not fit to bursting.

You can also tell that it’s rather good because most of the bands playing at End of the Road can barely contain their excitement. Some might say even they are in disbelief that a British festival can be as rammed full of other great bands, so suggest crushing Saturday headliners Mogwai. Or, like Beirut, they’ve even turned up the day before their set and partied hard thanks to “the most laidback security we’ve ever met”. It’s true, though: EOTR is incredibly on-point with its quality of musicians; three days of chin-stroking rock, multi-instrumental folk, Americana blues and more acoustic guitars than you can shake a peacock at. Notably, there’s an overwhelming female presence too. Joanna Newsom’s hot-pink plucking – her only festival appearance this summer – closes the festival, while ice queen Laura Marling delivers a crystal-pitched - if slightly lacklustre - set with backing mini-orchestra on Sunday. Rewind to Saturday, and the goth-pop sorority Austra and Zola Jesus are the main attractions in the Big Top – and both are as hotly tipped as each other. Not that we want to pit them together (we will) but the former Toronto-based outfit come out on top. Comparisons to Kate Bush are inevitable – frontwoman Katie Stelmanis flaps her wings and hands endlessly – but her operatic vocal athletics soar gracefully over the witchy New Beat synths, so sharp they could slash diamonds. One can’t help but notice either that she seems to be backed by Shakespeare’s Sister, which nudges their goth cred off the scale. Zesus, meanwhile, is incredibly disappointing: she skulks about the stage like a possessed fairy in an elegant Grecian gown, trying to command it with her monotone voice, but it all comes off a bit Celine Dion without the presence or the talent.

Luckily, noir princess Lykke Li adds the high drama while harnessing a more naturally quirky edge. Hers is by far the most beguiling spectacle of Friday: hair slicked back and dressed head-to-toe in a military black outfit, she cuts a vampirish, otherworldly shape – and this new aesthetic infiltrates her entire set. She blows her earlier plinky-percussive-pop material, ‘Dance, Dance, Dance’, ‘Little Bit’ and ‘I’m Good, I’m Gone’, like a gust of desert wind into the gun-slinging strut of dark rockabilly number ‘Get Some’ and tribal stomp of ‘I Follow Rivers’. A piano house interlude that Simian Mobile Disco would be proud of and lightening lighting is perhaps the danciest moment of the festival, and before that she unveils her new showpiece, a suitably gloomy cover of Burt Bacharach’s ‘Please Stay’. Sadness is a blessing, indeed, Miss Li.

For all the offbeat alternative music, though, there seems to be one thing largely missing at End of the Road: performances. Awesome retroscovering four-piece White Denim, last onstage at the Big Top on Friday night, are even guilty of being anti-party. The four piece pummel their way through one meandering psych-drenched jam with few grooves and even less gaps, only stopping to tell the crowd that they’ve been asked to turn their amps down (they don’t). San Fran garage rockers Wooden Shjips the next day have the same effect – wonderful while sat in your living room with coloured scaves draped over the lampshade and incense burning (well, you might), but not at a festival. Even Kurt Vile, the lovely Kurt Vile, with his locks hanging long over his face, started so well with a solo acoustic rendition of his bittersweet Dylan-esque ‘Blackberry Song’. But when his band joins him onstage for the rest of his folk-grunge numbers, he becomes a sneery teenager hellbent on distortion and without connecting to his audience, who are clearly impressed with his dexterous, multi-instrumental synthesis of rockabilly, stoner rock, 60s pop, psychedelia and blues. And so, he may be a novelty act of sorts in his motorcycle helmet, but bizarre End of the Road favourite and slide guitarist Bog Log III wins the proverbial meat raffle for most entertaining act of the weekend. All beer-swigging bravado and junkyard blues jams, he is ridiculous and hilarious and completely watchable in one, shouting to the crowd between songs and winning cheers for his one-man-band tactics (he drums with his feet and sings into a microphone inside the helmet while strumming) and playful songs like ‘I Want Your Shit On My Leg’.

Other honourable mentions include Canadian spook-folksters Timber Timbre, a band who’d be much suited to play later on in the night, but who create a funereal darkness in the early afternoon on Saturday thanks to their eerie tapestry of manipulated lapsteel, cinematic samples and synths, blues guitar and violin. Closing track ‘Swamp Magic’, from their new album Creep On Creepin’ On, creates just that, like a grindhouse horror monster rising out of the bog and dragging down its kill. Elsewhere, on Friday, Joan as Policewoman shows off her new album direction too on ‘Kiss the Specifics’, her slow-burning sensual blues givingway to dusty Motown-era ballads as she swaps her guitar for keyboard. Latest single ‘Chemmie’, the werewolf themed video for which, she tells us, was shot on a rainy day in Cardiff, gets a sunny airing with its organ-quivering melody, flaunting its more groove- and- bass-fuelled underwear. It’s an uplifting – and, dare we say it, sexy – departure from her usual piano tragedy style.

But it’s Zach Condon’s magnificent multi-skilled troubadours, Beirut, who really set hearts aflutter this weekend. His performance, complete with its enormously uplifting chorus of brass, is made for a festival like this. In some ways, they are the ultimate alternative boy band: they’ve enough exciting orchestral flourishes for the oldies – cue trombones, trumpets, tubas, an accordion, which adopts the synth line on electro-folk track ‘My Night With a Prostitute from Marseilles’; heartfelt singalong lyrics for the tweeny hipsters; a swoony frontman in Condon for the ladies, bashfully running his fingers through his curly mop like Robert Pattinson; and enough globetrotting influences, from Balkan brass to French chanson and, on their latest album The Rip Tide, plain ol’ American indie-pop, for the cynical music critics. And they manage to pull it all off without seeming twee or, worse, forcedly emotional. Instead, Condon’s reedy vocals are achingly heartfelt, and come to life on new track ‘Goshen’ while gentle piano, trumpet and marching drums rolls in the background. Hopefully, this new, more polished clutch of tracks will help them achieve the recognition that they so richly deserve.

And so, after a Hopi Ear Candle treatment (what?) in the healing circle, thus ends our very civilised End of the Road encounter. There were no hangovers, no upset tummies, just the woeful pang that we wished we had fitted more music in. Which, presumably, is EOTR’s motto too, as no sooner do we leave the field but they launch a new festival for 2012, No Direction Home. And that leaves us with just one last thing we wished they’d told us: how the hell do we…?