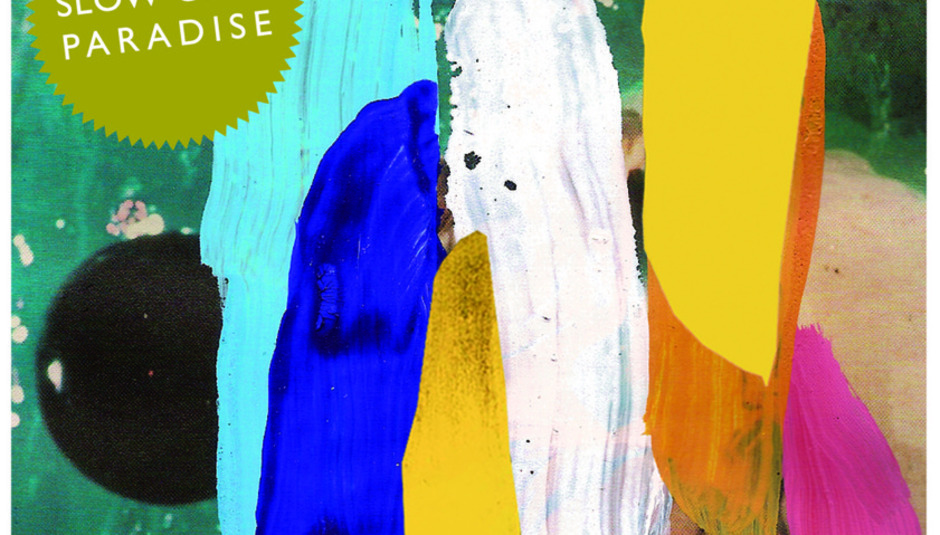 We took a first listen of Slow Club's forthcoming record, Paradise. Here's a track-by-track rundown of it.

This opens with an angelic, carol-like vocal. I have to admit I often get confused as to who is singing in Slow Club sometimes, but there is no mistake here – they both are, at the same time, which creates those wonderful, wonderful harmonies.

This one, starts off with that gigantic reverb that Slow Club like. It also begins with Rebecca's expansive singing, which uses that very same reverb. A snare drum tip-tip backs it all up, keeping pace. Of course, it threatens an absolutely gigantic chorus from second one, and the anticipation is unbroken because we don't really get one, the teasers!

I'm fairly certain that this track has been a mainstay of their recent shows. Charles takes the lead here, backed by a guitar which ratchets up the lament in massive increments, slowly and surely. No massive chorus yet, but a massive verse along the way and, yes, more sadness. It's quite a sad song, this. The title kind of suggests it, but a title alone is often not enough. MASSIVE.

I think I said that when Slow Club made 'Giving Up On Love' they should pack it in because they would never, ever top that song. I still don't think they will, but what it demonstrates is their knack for writing a super little pop song when they need, or rather want, to. This one isn't pop in its purest as that one was, but it varies, surprises with changes in tempo and depth and even has a bit which, for want of another, less horrid, phrase, rocks.

Another frequent recent highlight of recent SC shows, this. Usually completely acoustically if possible. Again, it highlights how close in range and tone Charles and Rebecca's voices are when they need to be. This meanders forlornly, like the acoustic melancholy lament that it is. It might not be quite lump-in-the-throat worthy but it does warrant at least a heavy, world-weary sigh at regular intervals. Oh, and a saxophone makes a surprise appearance too! It really is the instrument du jour in 2011.

This sees a change of tack, again. Or rather reverting to what came before, with a steady but longish lead in to more of those resonant drums. The production here, like the rest of the record, is raw but not polished, instead letting the songs themselves do the talking. And they do talk, and very well. It whirls and sort-of has the aesthetic of those backwards-looking chillwave songs, but with acoustic guitars instead of plastic-sounding synthesisers.

You know, Miss Taylor's voice is underrated. I think. At least I've not heard anyone talk or write about how good it is. Perhaps it is because there's not that many tracks where things are slowed down enough for her smooth, creamy tones – yes, creamy – to ring out. Here we have plenty of time to appreciate it; the complete vocal range. Sublime, I say.

Much like Hackney Marsh, we get the toned-down version of the duo here. At least for a while, before the ultra-resonant guitars return. This would work pretty well in a church hall, you feel. In fact, was it even recorded in one? Certainly sounds like it.

And now we're back to pop-rock mode. Guitars approach as searing as they get. Drums are rapid. The chorus and verse descend and ascend vocally and there is some serious crescendo to get a grip of. It reaches a climax and ends with a bang. Just in time for you to catch your breath.

This is the song the album had been waiting for. Not that Slow Club don't do sprawling, but they don't tend to do it for an extended period of time. This one, however, comes in at a lengthy six-and-a-half minutes where Charles takes lead vocals and sees the band at their most folky. Add some atmospheric, almost ambient strings, though, and things move significantly past the “one man and a guitar” thing. Just when it could end, at two-and-a-half-minutes, it doesn't. It extends beautifully for another four.

Oh, title tracks can be a funny thing. If they aren't the “lead” single then people can forget them. But save them til the end and people might not. There's a big sound to this one, as it wafts around your eardrums with a great sense of purpose, brief stabs of guitar feedback beneath an ever-thickening texture. It's percussion heavy. And then come the layered vocals of “I wanna live in paradise”. You wonder where it could go next, but it keeps on going, building and building. Until more feedback comes. Then stops. Suddenly.

Paradise is released on September 12 through Moshi Moshi. Stay tuned for the full review.