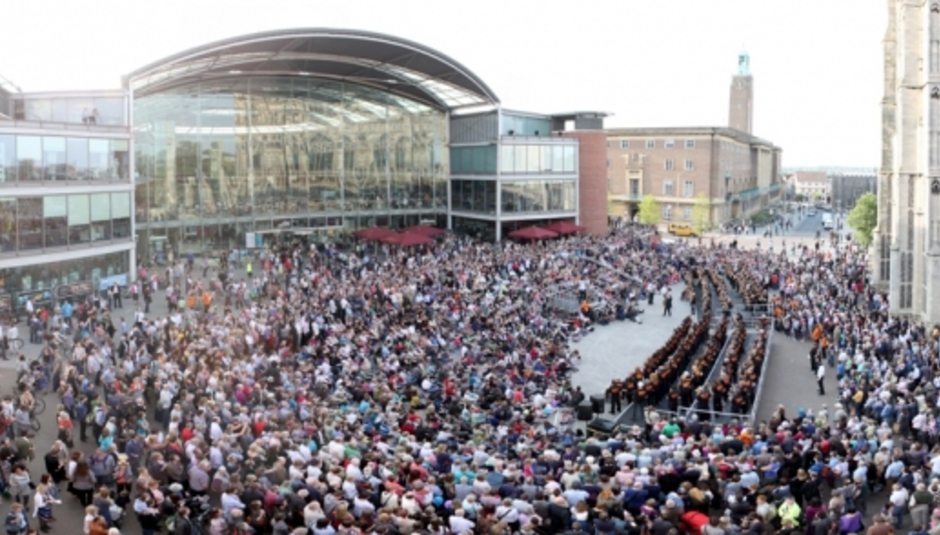 Norwich is a relatively small city, I’ve heard it rumoured as being THE smallest city in the UK (it probably is true, but the first page of Google results are giving me nothing in terms of facts, so for now, it’s just a rumour). Yet despite this it has a surprisingly large and varied scene of bands, electronic producers, singer-songwriters, promoters, labels, DJs, visual artists, arts collectives, and great venues.

Due to the size of the city the music scene has always consisted of a number of quite niche sub-communities. While some may think this would create a less defined SOUND for the City as a whole, what it really seems to do is make each those groups more extreme in nature and therefore more or less attractive to outsiders depending on your musical leaning. The support between bands is strong, most bands listen to and buy one another’s releases, and attend one another’s shows regularly. Any successes are celebrated and seen as good thing for the city’s music scene as a whole.

Due to the mixed architecture in the city no two venues are the same, or even vaguely similar for that matter.

For instance, the Norwich Arts Centre (recently dubbed best live music venue in East Anglia by the NME) is built inside St. Swithin’s church, it’s home to not only a a gig venue and a bar, but spaces containing regular art exhibitions, evening classes in journalism and photography, and new yearly music industry convention - Norwich Sound and Vision. The live performance area is beautiful and, although sometimes a little too reverberant for more fast paced or heavier acts, normally delivers a level atmosphere other venues strive to create. I don’t remember having a bad night out here, just brilliant. Often not appreciated for it’s live music capability, the Playhouse Bar is just amazing for the right act. Bands are positioned at the end of a narrow room, containing the bar and seating, with a view through a long windowed wall to the outdoor seating area set beside the river Wensum. There’s something about the closeness of the venue which makes you feel like you’re IN the band rather than watching it. Perfect venue for a Sunday evening in the Summer.

The Waterfront and the University of East Anglia Lower Common Room (UEA LCR) are the two biggest venues in town and tend to attract the more popular and more mainstream touring bands. As venues go, technically they are great, but lack a little in terms of feeling and intimacy for me personally. Go here to see Jools Holland and his TIGHT band twice yearly at least.

You could spend a full year in Norwich and not come across some of the smallest venues, these are where you will find some of the most extreme music and interesting surroundings. Bedford’s Crypt, Take 5, The Rumsey Wells’ Underbelly and The Marquee (now sadly closed) all offer that ‘is this a bedroom, basement, bar, toilet, or all of the above’ experience, and form something of a proving ground for new local acts. Completely essential, lovely and grimy.

What’s been going on

The last couple of months have been busy for live music, May saw the Norwich Fringe Festival consisting of around 80 gigs across 16 days featuring; Girl in a Thunderbolt, Don Broco, Johnny Foreigner, & Isy Suttie. The Fringe normally tends to include a more leftfield, underground and varied set of performers than other music and arts festivals in the city.

Also in May was the Norfolk and Norwich Festival, based around a massive “Spiegeltent” in the city’s Chaplefield Gardens. Like an oversize, art deco woodwork big top, the tent houses a bar with a circular dance floor for general nightly partying, most of the festival’s cabaret, dance and circus events as well as some of the live music nights. With a strong leaning towards costume, 20’s style glamour, and burlesque cabaret the tent adds a darker vibe to the festival, which otherwise (due to some of the choices of bigger musical acts) could feel a little bit safe.

In June the first EVER Playfest took place in the dense (bleak) rolling (flat) hills (fields) of Quidenham Norfolk.... I KNOW!

Acts performing were a fair split between some of the best young acts coming from Norwich today and some “larger” but mostly less interesting major label bands and artists.

The first year of a festival is always difficult, I think mainly because a festival doesn’t feel like a festival without seas of bladdered teenagers falling out of tents and destroying everything in sight, including their own brains. This may not be the most desirable bi-product of such a simple event, a load of bands playing on the same stage over a weekend, but the sheer level of debauchery does help it all feel a bit more real somehow. I personally can’t comment on Playfest firsthand as I wasn’t there, but I’ve heard reports of a pretty strong start for the festival.

BK & Dad played an absolutely blinding (deafening) floorshow at Norwich Arts Centre, a first for the venue. The two piece noise/post/math-rock band of brothers have been growing in popularity with every filthy, violent, and bemusing show the perform.

With support from two Norwich Superbands BROTHERS (feat. Members of Fever Fever and The Brownies) and Khan (feat. ex-members of KunK, Pistolas, and Uh Ohs.), you know when it’s been one of those gigs when Twitter blows up the way it did that night.

Comedian Adam Buxton, now a Norwich resident, hosted the SEVENTH installment of his fantastic and amusing study into the world of music videos with BUG#7 at the Norwich Playhouse at the end of June, one to try and catch in future if you like music, videos and comedy.

Although originally out of Lowestoft, Faster than Robots have found more of a market for their sound in Norwich and frequently play here. I decided to include them as a Norwich act because they’re great, no other reason, but because they’re great I feel quite possessive about them. The band just self-released a free EP called Answers on a Postcard. Great riffs, strong melodies and suitably melodramatic lyrics, slack yet solid performances equal lo-fi indie pop a la Pavement, Guided By Voices, and Built to Spill.

Answers on a Postcard EP by fasterthanrobots

I don’t know about you, but I sometimes like to listen to music which makes me feel like I’ve had the front half of my face carved off by a belt-sander. Fever Fever do that better than anyone right now and they just released a free single ‘Teeth’. The track was produced by Rob Ellis of PJ Harvey, and Anna Calvi fame at Monnow Valley studio in idilic (read - actually has some hills, is not flat like Norfolk) Monmouthshire.

Here’s a video of the band playing ‘Monster’ LIVE on a stage at a festival called Glastonbury.

Long running Norwich indie label NRONE, a favourite of Radio One’s Huw Stephens, released titles by; self-deprecating slackers Hello Bear, violent riot grrl meets indie poppers The Brownies, way too young to be any good but alarmingly ARE We Can’t Dance and expansive indie rockers The Barlights and are readying their first release by The Cads with the single ‘Club of Rome’.

The amazing Tawny Owl and the Birds of Prey, released a free EP which is available to download here

Think - Tom Waits, Man Man and Wild Beasts all playing an original Prog-Motown covers set ON ACID... No but really, one of the most interesting bands in Norwich for sure. Sargasso Trio released their second album on July 2nd. It’s hard to write much about this band without writing too much as you simply can’t categorise them. Some say Synth-Folk-Pop, some say Indie-Pop, some say Electro-Folk, but whatever they’re just REALLY GOOD.

The once trio, now quartet, released their first album Burnin’ Burnin’ Burnin’ on Tim (Love) Lee’s Tummy Touch Records’ offshoot Boy Scout Records. This time around they’ve started their own independent label Science and Nature for the release, and marked the occasion with a show at The Norwich Arts Centre and free download of a non-album track ‘Living Without You’.

The single ‘Dinner’ taken from the album was also released on July 4th.

Norwich based PR and Label Gravy are to release their first record, “Wet Bandit” by Divorce on the 25th of July. Divorce fans can pre-order the 7” single here

On the 9th of July complicated-pop band Olympians play The Waterfront. Drones and melodies climbing between familiar hymns and comforting nursery rhymes, music that’s probably more easily expressed as an equation and stories of pathetically failing at love, all with a dark and pretty obscure sense of humour. Olympians have a lighthearted and exciting live show, calamitous yet incredibly tight.

Mid July see’s the year’s best opportunity to gawp at middle-class yummy-mummies struggling to put up tents next to dyed pink sheep with Latitude Festival. Despite the line-up being typically mainstream, there are a few gems hidden in there, and if you’re up for a smaller, more relaxed feeling festival in truly beautiful surroundings then it might be worth a look. Besides there’s always a wealth of comedy, poetry, cabaret and theatre to take your mind off the heinous pop music.

Godspeed You! Black Emperor will be playing the UEA at the end of July as part of their most recent reformation tour. So it’ll sound pretty much like it did, but NOW instead of THEN. It’s great to see ATP putting on gigs in Norwich at long last, let’s hope there are plenty more to come.

Norwich’s own ATP, TweeOFF! kick off August with Crystal Stilts playing the Norwich Arts Centre. TweeOFF! nights are brilliant if you love all things alternative. They range from straight gigs, in the past they’ve brought us; No Age, Yuck, Holy State, Maths, O.Children, Micachu, HEALTH, Times New Viking and Thee Fair Ohs, but also more recently they have started a series of cinema events called TweeOFF! TV showing music films and documentaries like Don’t Need You, Fugazi: Instrument, Sonic Youth Presents and Kill Your Idols.