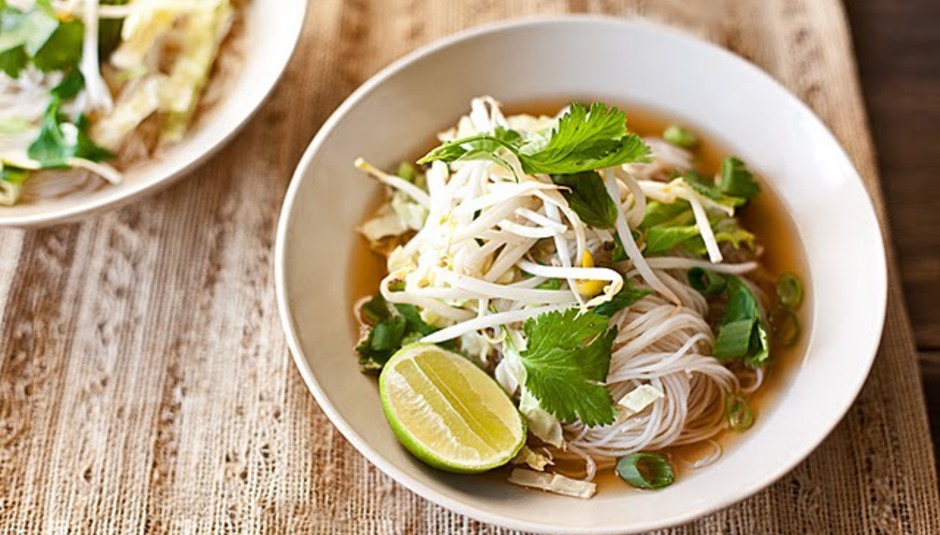 Death Cab for Vietnamese: Nick Harmer's Guide to the best Pho in Seattle

Death Cab for Vietnamese: Nick Harmer's Guide to the best Pho in Seattle

Kicking off several days of DiS being taken over by Death Cab for Cutie, to celebrate the release of Codes & Keys (released on Monday), is bassist Nick Harmer's Guide to the best "Pho" in Seattle...

There is nothing like a megahuge bowl of noodles steaming in your face. And there is nothing like a solid, satisfying bowl of the Vietnamese delicacy called Pho. In Seattle, Pho restaurants are fairly easy to find but there are debates about and alliances to every establishment. In my food adventures around my home city of Seattle, I have narrowed the list down to three Pho joints that each nail the noodles, but also offer just that something extra special that the others do not. So, in no particular order, my suggestions to you should you ever find yourself in Seattle on a perfectly miserable rainy day and want to drown in a bowl of soup as big as your head are as follows:

The Than Brothers often get the nod as the family that brought Pho into Seattle's public consciousness. Sure, there were restaurants serving it long before, but they really streamlined it down to the essentials. Quick service and a cheap menu with heavy focus on just the soup. Pretty much right as you enter the place you'll be asked "How many" and pointed towards the closest booth that can accommodate your party. Almost immediately you'll be asked for an order. Pho is basically a pile of rice noodles in broth and you customize with your main ingredients; everything from veggies to chicken to beef to crazy shit like tripe is available. After you order, my standard is chicken, a standard plate of "condiments" featuring bean sprouts, lime, fresh basil and sliced jalapeno peppers will be placed in front of you. This is common really to all Pho joints in Seattle, order your soup, and BAM fixings on the table. The one extra special thing unique to Than Brothers however is that with the condiments plate they also drop on you a mouth watering cream puff, one for each person at the table. And these little puppies are DELICIOUS. Every time I go I tell myself "Save the cream puff to put out your mouth fire after eating the spicy soup" and every time I eat the damn thing the second it hits the table. So, if you want a bonus cream puff with your Pho, Than Brothers is the place to go.

A little further down the main Capitol Hill neighborhood drag called Broadway is another Pho establishment called Pho Cyclo. The experience is very similar to Than Brothers, quick seating, fast order, lighting condiments plate but the difference here are two subtle, yet significant points. 1) The garlic. In the family recipe at Pho Cyclo they cook tiny thin slices of garlic into their broth and the effect is astounding. If I ever find myself craving Pho, my mouth craves their hints of garlic above all else. and 2) they have a wicked-awesome hand painted mural complete with embedded color shifting LED lights that takes up an ENTIRE wall of the place. A mural, you say? How could that have anything to do with soup? Trust me, more that you think. See, one thing I neglected to mention is that almost every Pho joint in Seattle also is barely hanging on to a passable grade in the "clean and presentable" department, put simply: They aren't spending much on ambiance. A five dollar bowl of soup is easy on your wallet, but it doesn't go very far in terms of nice furniture, sparkling bathrooms and interior design. Pho Cycle makes at least a solid attempt at creating a restaurant that you don't mind spending time in, where as their competitors really have created a "in and out" kind of affair. And that mural really seals the deal for me. I still can't figure out if the color shift LED lights embedded in the wall were there BEFORE the mural and they just painted a scene around them or of they actually had them installed to accentuate the piece, it really doesn't matter either way except I like talking about it which stands in contrast to my experience at say, Than Brothers, where I keep my head down and eat. So to sum up, Pho Cyclo = garlic broth and pleasant atmosphere in the main dining room.

Hands down the cleanest and most pleasant Pho place in Seattle. I mean, the booths are in great shape, the lighting and paint is modern and comfortable, they have flat screens with news and sports on, in every way Cafe Pho CRUSHES the competition. Even their bathrooms are consistently clean, great smelling and the kind of place that when you wash your hands you feel cleaner than when you started. That might sound strange but trust me there are plenty of restaurant restrooms that make me feel the opposite. The big negative? It's at the mall. Yup. Northgate mall. You don't actually have to enter the mall and there is not thru access to the mall from the restaurant but you still have to drive to the mall, park at the mall, and yes, get pretty damn close to the mall to eat here. But don't be scared because really what you are going to Cafe Pho for is the relaxing, clean and well maintained environment that they have created. And that is their edge really. Trust me, visit Than Brothers and Pho Cyclo and then pop over to Pho Cafe and you'll understand with immediate clarity what I'm talking about. I can only speak for myself here but, the best tasting bowl of Pho served at the filthiest place will always be just as satisfying as an average bowl served in a beautiful setting.

So those are my top three Pho places in Seattle in case you're ever there and want to enjoy. I know there are plenty of other places and every local has their own personal favorites, but I stand by my choices for now with the caveat that I can change my mind whenever I want. So if I'm missing something amazing, let me know and we'll go get a bowl together and work it out like adults. :)