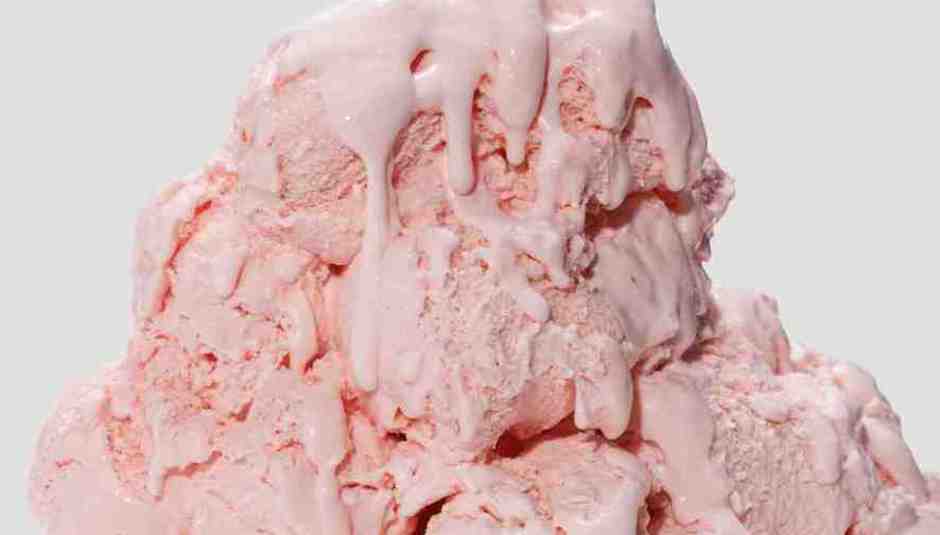 This week I asked my Mum if she would like to contribute to my column. Her marks are in brackets. We do not agree on Single of the Week.

I was all for Battles before I saw their video, which seems to indicate that they do not think their song is enough, and that an artfully-styled flash of tit is required before we can take their song to our hearts. In fact, of course, it does the opposite, it makes me think they are the sort of apparently grown-up men who wish to represent themselves by using images of girls in their twenties dressed like teenagers from 1993. And they are licking flowers and lamp shades and ice creams as if they were DO YOU SEE DO YOU SEE DO YOU SEE ICE CREAM CONES ARE A BIT LIKE COCKS. Before you get excited and press play, I should point out that it is not even that rude; simply the latest bit of slightly disappointing and retrograde positioning to have hit mine eyes this week. As for the song, I am happy to tell you it is uncommonly brilliant, with lyrics apparently sung in Spanish, or possibly Portuguese, or possibly just nonsense, with a middle eight that employs Stereo Larks by forcing an amusing nerdy man telephone-tawking in your left ear, while a man sings dum-de-dum-dum-dum (along to the bassline) in your right. ‘Ice Cream’ is also available on the best looking Neapolitan vinyl triptych I have ever seen. Sadly the packaging isn’t scratch’n’sniff - but as I am learning today, you can’t have everything. As in: there are no cocks in the video. [6/10]

While I can recognise that Battles have made what is perhaps the most inventive song this week, Toddla T’s tune makes me the happiest. And even though it is the sort of song that will provoke your friends to sing along using the words ‘got to get up, got to feel good’ (well done, friends) I am not sure that will trouble my synapses for very long. Sometimes when people ape klub klassix they do such a grand job, and buff everything up to such a high sheen, the only thing you can concentrate on is how shiny it is. Yes, I do put my hands in the air when it is on. No, my Mum does not like it. ('That's enough. I get the idea') [6.5/10]

Easily the least cynical and most heart-warming of this week’s releases, Herman Dune heap cherries upon bells with a videothing that includes a) John Hamm and b) a small blue puppet Yeti. ‘Tell Me Something I Don’t Know’ is in the Jonathan Richman tradition of quirk but manages to sidestep all of the attendant kook by dint of being drenched in believably naive charm. It is about going out with someone who keeps mentioning things in order to impress you, but you are all like whatever dude I done that / hearda that YARS AGO. You should be nicer to them. And this is brilliant, slight and neatly done. [8/10: 'It's a bit repetitive']

Yay for Bibio, who this week would like to spin some sound out of the broken shoelaces of the Red Hand Gang, some bubblegum that comes with a free comic and a baseball t-shirt with differently coloured, raglan sleeves. By all of which I mean, ‘K Is For Kelson’ harks back to a particularly 70s, scuffed and childlike sort of jauntiness, and I think you would have to be a bit of a churl to take against it. No one could object to being taught their one to tens while this was on the stereo. Apart from my Dad, who was doing the washing up but felt moved to exclaim that this 'Sounds like bloody Romanian music'.

With a melody and pace not a million miles away from John Lennon’s ‘Woman’, here is Cass McCombs to give us a lesson in how to be trad., familiar. And it’s a stately sort of lesson if a little on the dull side. Also, it has some unforgiveable ‘woahs’ and my Mum did one of those amusing exaggerated yawns when I looked up at her. 'Where does it go?' she said, rightly. [4/10]

Beat Connection’s delirious last, ‘Silver Screen’ began with schooly flutes. ‘In The Water’ however, chooses to be literal, and sploshes around for a bit before invoking some sun-bleached chorals and 90s ravey keyboards. Then it dawdles in the same spot for about a minute, as if mesmerized by something. When it remembers to keep moving it’s quite compelling, but I may have had my fill of soundscapes; this washy, somewhat heartless and at arm’s length brand of hazy pop can only take you so far. And I want pop to push me off the precipice. [No response: putting the bin out.]

Sparrow & The Workshop - ‘Snakes In The Grass’ (Distiller Records)

‘Snakes in the Grass’ is good because it does that stop-start thing; it is a dodgem of a single which makes a virtue out of jerking. Jill O'Sullivan also has a voice I find hard to resist, it loses none of its melody as it turns the dial marked ‘power’ up as high as it will go. And even though it sounds like it could quite easily have sat beside a Sebadoh b-side on a gifted mix cassette from 1992, this does not matter. Regular readers will know I am a big fan of concision in singles (if not in my own prose) - which is why I am also delighting in the chutzpah of a single that lasts for just two and a half minutes. I mean, no one is going to file Sparrow & The Workshop under Difficult Art, but they are very likeable all the same. (Mum: 'Is it Bjorn?' (she means Bjork) / Me: 'She sounds a bit like Courtney' / Mum (over the stereo): 'OH, IS IT COURTNEY LOVE?' / Me: 'NO.') [7.5/10]

Have you heard ‘Lick The Lizard’? It’s awful. And not like ‘a bit awful’ either, it is the sort of awful where a person might be trying to be clever, and doing two things at once, and preparing a spot of dinner, and listening to the singles at the same time, but listening to them ‘blind’ because what with all the chopping and stirring, there is no time for looking up to check whose song is whose. When ‘Lick The Lizard’ came on, I said out loud ‘What the uckfing uckf?’ before realising it was Rusko, whose Woo Boosts I used to adore. So I did a little cry into my stir fry, and then I ATE MY OWN TEARS. There is some sort of grand philosophical meaning here, I just don’t know what it is. I did, however, play 'Everyday' to my Mum, who absolutely ruddy loved it. 'I like happy music,' she said, 'and I really really like this'. / Me: 'Oooh, do you? I don't.' / Her: 'Do you not? I do.' / Me: 'Do you? I don't.' ETC. [8.5/10, for 'Everyday']

One of the most frustrating things about art is the distance between what you intend and what ends up on the page. And I think this may be why 99.9% of first songs by first bands forget that it is possible to write a song about heartbreak without mentioning either hearts or love once. What with Conor being one of life’s most elegant lyricists, here on ‘The Pact’ he does a grand job of extracting meaning from the idea that sometimes love is a burden and a sapper, taking more than it bestows. The clever thing is that he sounds so jolly while he does, like a smiling jailor as they turn the key. 'Well, you know I'm going to like this,' say Ma. [8/10]


Wendy is on Twitter, here. Yes she is trying to spoil all your fun, because that is how she gets her fun.