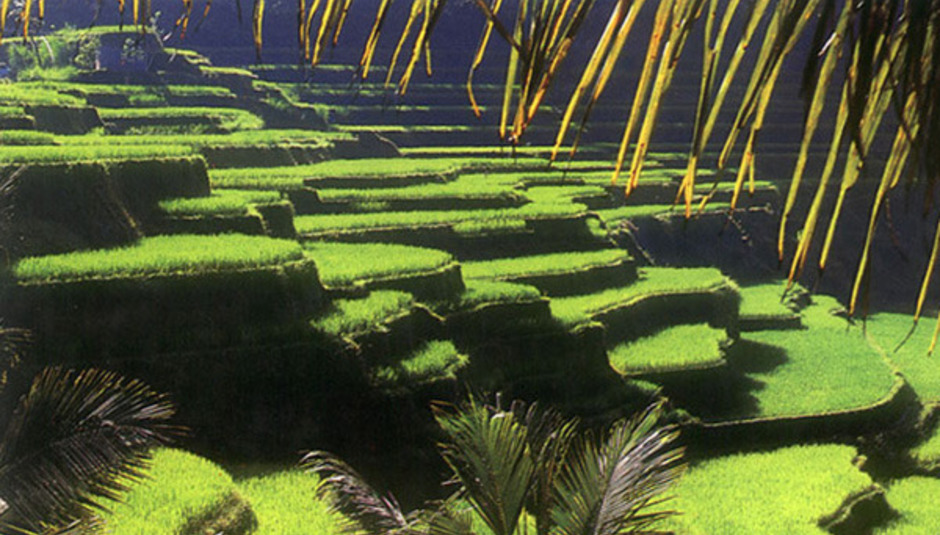 Or Coals to Newcastle: Bringing Reichian Phasing to Bali by Evan Ziporyn of Bang on a Can All-Stars (formerly a member of Steve Reich's band)

Steve Reich is the first to acknowledge the influence of non-western music on his work. He readily speaks of his time in Ghana as one of the seminal formative experiences of his career, and the Anlo Ewe 12/8 bell-pattern is in many ways his signature motive.

Yet Steve has always also maintained a well-argued wariness about east-west fusion, a vigilance about just what the limits of influence should properly be. As always with Steve, he makes no bones about this – his thoughts on the subject are clear and in the public record, most succinctly in his 1973 article Postscript to a Brief Study of Balinese and African Music:

He therefore advocates ‘continuing to use the instruments, scales, and any other sound one has grown up with.’ This is obviously a winning formula, exactly what he himself was doing and would continue to do to such brilliant and lasting effect.

Everything about this makes sense to me, and yet I’ve disregarded it with impunity for over 20 years. So while Steve has always been a generous and conscientious listener to any of my music that happened to cross his path (generally via US mail, with my return address), we’ve continually ‘agreed to disagree’ about this particular subject: he’s politely endured my follies in this regard, and I’ve been stoically swallowed his polite endurance.

So when the Amsterdam Gamelan Festival asked me last year if I would ‘arrange’ Music for 18 Musicians for a Balinese gamelan, I immediately declined, even after I realized it was a chance to work with one of the best ensembles in Bali, the Ubud-based Semara Ratih. I explained to them that I didn’t think Steve’s music could really be ‘arranged’, certainly not for a set of instruments that, among other things, wasn’t tuned in a western scale, that couldn’t replicate exactly his melodies or play anything resembling his gorgeous harmonies.

Still, I had to admit I was intrigued with part of the idea, in fact the same part Reich himself brought back from his ‘brief study.’ What would a Balinese group – a REAL Balinese group – do with Reich-ian rhythms? Reich acknowledges learning the basics of interlocking parts from Africa and Bali – so what happens if this distilled idea is taken full circle? Furthermore, what happens if Reich’s extension of this idea – the singular invention of pattern phasing, which is never found in Africa or Bali (but is of course found in tape loops, in Come Out and It’s Gonna Rain – comes along for the ride?

So I proposed to the festival that I might write a piece in homage to Steve, one that takes Steve’s own advice but reverses the polarity: studying Steve’s rhythmic structures, taking them ‘where they will,’ and composing a piece for Balinese instruments and Balinese musicians.

The fact that a traditional Balinese ensemble - still playing temple ceremonies, learning in the traditional manner, etc. – was even interested in playing Reich indicated to me that times had changed. It accorded with my own 2009/10 experience in my opera, A House in Bali, in which the Bang on a Can All-stars worked side-by-side with the teenage wunderkinds of Gamelan Salukat. These village boys – average age 17, most never having left Bali before – could handle anything I threw at them. And the more outside of their experience, i.e., the harder it was for them to ‘get it’, the more they felt they owned it once they did.

I went to Bali in August 2010 to make the piece, which I had already titled Lapanbelas (“18”), while also rehearsing with Salukat for the upcoming BAM premiere of House in Bali. We spent two weeks in daily rehearsals, often lasting 4-5 hours, only shortened by a particularly insistent Australian tourist, who insisted that the music was ‘disturbing her holiday,’ and suggested the group would be better ‘playing in a rice field.’ I also made the decision to do it gonzo style, not only without notation for the group but without any score at all. My only principle was to base everything – EVERYTHING – on things I had learned listening to Steve’s music – so don’t be surprised if you hear a connection – that’s kind of the point. Through sheer coincidence, it ended up being 18 minutes in length. Here’s the opening, which we recorded last month in the Ubud Pura Dalem:

...and now here’s MY postscript…we took the piece to Amsterdam and premiered it at the Tropenmuzeum in September of last year.

I then returned to Bali last month to record the piece with the group. Casting my fate to the spirits, I’d made no advance arrangements other than to vaguely remind the group that I was coming a few weeks in advance, on the assumption that whatever plans we had would in any case have to be re-made once I arrived. So why redouble my efforts? Somehow it would all happen, or it wouldn’t. I called Pak Anom, Semara Ratih’s leader, on arrival, and he nonchalantly told me to come to their regular tourist performance that evening so that we could discuss things. When I arrived I was handed a program and went to my seat, scanning through a list of pieces all-too-familiar to any old Bali hand – Welcome Dance, Legong, Taruna Jaya, Baris, Lapanbelas…wait…what did I just read?

So yeah, my piece is now part of Balinese tourist culture, at least on that night and a few others, suitable for busloads of Japanese tourists, all of whom listened to it in its entirety – and saw my name in the program - without any noticeable cognitive dissonance, nothing to suggest that this was anything out of the ordinary on the Island of the Gods. This in itself is a certain kind of ironic accomplishment for me, an O’Henry-ian response from the cosmos to my own ideas about cultural alienation, the same sense of outsider status that had driven Colin McPhee home 50 years earlier (from his memoir, quoted in my opera, “I will always be the outsider”). Whatever.

That aside, what thrilled me was to watch Semara Ratih owning these patterns, embodying them in their movement, in their facial expressions, and in the exuberance of the music itself. Almost as if they were welcoming something back from a long journey.

In Photos: Kong @ The Harley, Sheffield