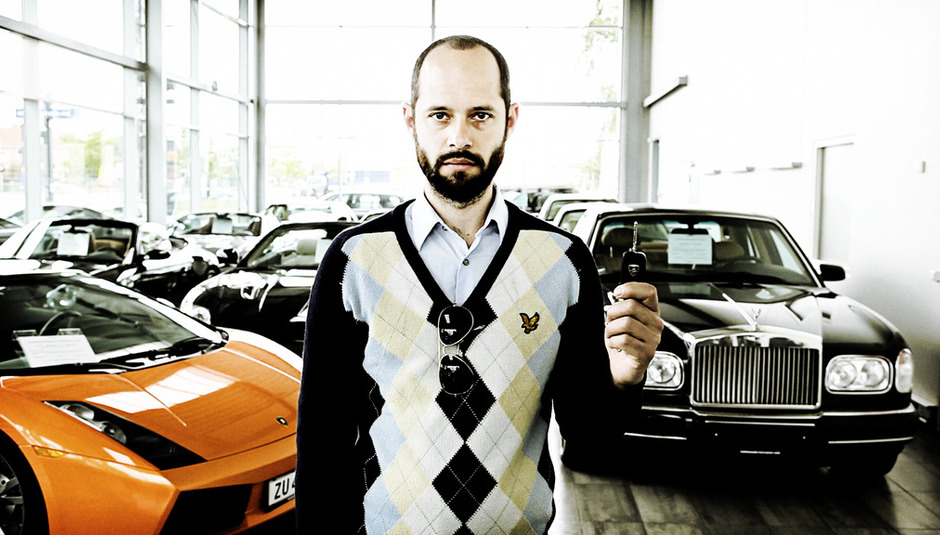 This week we are talking about bands who have a sense of music's inherent ridiculosity, pop from one of The Beautiful People, scary music by Louche Types, washes of noise about life as a vacuum AND a not very convincing three minute manifesto about not really being in love.

As someone who cannot drive, I am afforded the continual pleasure of riding in the fun seat. And though some find the plains of Norfolk bleak, I happen to love them; endless flat plains make for the widest skies, which is good if you find your thoughts hovering and darting - even if you want to be completely literal (which I do) and say that wide skies lead to wide thoughts, endless possibility. Anyway, I was in the car, and I was remembering one occasion where I had said something particularly awful. It was a long time ago, but as there is no statute of limitations on self-flagellation (or an upper ceiling on how long after a thing has happened after which you are not allowed to regret it), I regretted it, I realised I had been a fool. You see, I remember contending how hardly anyone I knew had any self-knowledge, how rare it is to meet someone who truly, fully and absolutely realises just how ridiculous they are, and how this in turn makes an ordinary thing like Going To Work the habsolute thing of horror it invariably is. The crass and abominational thing about such proclamations is that by saying them you automatically exclude yourself from their damnation (YOU are a CLASS APART), but also, years later, it is possible to realise that what you notice about Other People really, REALLY can apply to you. Which is why I was willing to take on board - just for one dread moment - that perhaps I had no self-knowledge. And that there was a very strong possibility that the view I take of myself (which, of course, is generally agreeable) could be in total opposition to How I Really Am. I could be Them! So could YOU.

Now, the thing to tell you about WhoMadeWho is that they are a very rare thing: a band with self-knowledge. They know what an absurd game music is, they know making music with a sense of humour rarely wins you prizes because (unless you are in the arena of Pop) no one will have any time for you if you are not getting red on your wrists for breakfast and applying misery poultices to your doom-head for every hour thereafter. And yet WhoMadeWho carry on making brilliant songs filled with danceable portent, and then making videos that go with them. This one has them at a support group for unmanly ineffectual chaps, and they are all crying, every one; they cannot assemble flatpack furniture and they cannot wield a De Walt and they cannot even iron. I salute you WhoMadeWho, you with your infernal deftness and your damnable lightness of touch.

This time around, Idiot Glee would like to convince you that they are not in love. I don’t believe them, singles don't sound like this unless you are deep in the clutches of love's vile madness. They are also a band determined to prove that the idea of layered harmonies still has breath, and they are the ones to collapse the bellows. All that said, I am willing to entertain the notion that ‘Let’s Go Down Together’ is actually about glorifying the idea of No Love, perhaps a life without it would be supremely freeing. Certainly there are less tears, but I am not sure I could do without the clinches - so let us believe them for three minutes and thirty six seconds before getting back to the business of bumbling. Should you text them back? No, you should not.

Sarabeth Tucek - ‘State I Am In’ (Sonic Cathedral)

Sarabeth Tucek is not covering Belle & Sebastian because her delightful and stately-paced song in fact sounds a bit like she has The Jayhawks in as a backing band - and they are employing some of the arrangements from their yummy Hollywood Town Hall halbum on it. This makes it sound as if I am saying that Sarabeth has not done her record because some men have come in and done it for her, and do you know everyone, there actually are a lot of people who say this sort of thing about women in music; presumably they are the same set of people who buy special WIMMIN IN MUZICK issues of popular music magazines or describe Kate Bush as 'intoxicating', which is shorthand for their not being able to get their head round the idea that a woman could be responsible for a body of work as marvellous as hers. Women! Always such a ruddy puzzle.

If every man had a speaking voice like Aidan Moffat, no man would ever be single. Also, the brass section on this is ackfing rapturous; moment-inducing.


The Hit Parade - ‘There's Something About Mary’ (JSH)

Like a monumental div I did not make up my mind about The Hit Parade's last single (the utterly wonderful 'I LIke Bubblegum') until about four months after it was released, I am of little use to them. In my defence, they are in possession of a quality which is at first slightly impenetrable, and it is a giddy, plastic sheen that makes them sound curiously out of time as well as old-fashioned as a curio; putting my enjoyment at arm's length. Anyway - as I do not want this to happen again, but as I also cannot make my brain understand things any faster - let us say now that 'There's Something About Mary' is a bona fide pop smash. If I turn out to be wrong you can all bundle me behind the terrapins, chuck dirt in my hair and put worms up my nose.

Just because you work from home does not mean you should not live according to a timetable, which is why I have one as detail-oriented as the one I had when revising for my GCSE exams. And though now my soundtrack is different; and though I am still particularly proud that my revision cassettes consisted of 1. The Best of Devo and 2. What’s Going On; and though I shan’t tell you the others; I will tell you that at precisely 3pm every weekday you will find me having a Scheduled Dance Break capable of stirring the most somnambulant of brains, it can rouse when caffeine has ceased being able to work its jerky magic. Many, many times I have used Florrie for such lively purpose, her last, ‘Summer Nights’, is a terrific pop song I heartily recommend. So is ‘Begging Me’ - though its rather daring move of starting with a chorus doesn’t quite come off; you spend a lot of the verses begging for it to come back. And one shouldn’t beg, it’s vulgar. Unless you are as beautiful as Florrie, and then anything you do is absolutely fine.

Baths - ‘The Nothing’ (Anticon)

Baths, or Mr. Will Wiesenfeld if you would like to be formal (oh go on, let's), would like to sing you a song about all the non things he does; his non-life and his non-love and his non-doing. Usually the celebration of such unactivity would result in a song which springs from the whiny doldrums, so it is entirely to his credit that instead we have a single that sounds like a rolling ball of wire-wool that does muffled thumps on the downbeats and which gathers echoes each time it circles. It does have busted speakers (because this is the law these days), but it also has a don’t-feel-sorry-for-me general air that makes it sound both dulled and happy, a grey smile. Also, I cannot help feeling it would be nigh-on insane not to love a man who is a vocal evangelist for the pleasures of real baths - like all civilised people I too think a day is not a day unless you have spent at least half an hour of it waiting for a foot-depth of water to get cool enough to wash in. I can't imagine he is a choclit, Sauvignon 'n' candles sort of cove, but one mustn't judge, I've never mettim.

As Wild Beasts have traditionally been a band I admired rather than loved, I was glad to hear their album the other day and found I loved it. ‘Alabatross’ is from it, and though I would expect less sledgehammer symbolism from a Wild Beasts song title it really is super, it wails in the way only they can and puts the willies right up one. What I especially like about Wild Beasts is their louche air, they are a band I am very trepidatious to listen to too closely to in case I hear something I wish I hadn’t. Not many bands can do this, I think, they have created a world that is completely their own.

Adem begins his song with the sound of piano strings being struck from inside the instrument and this, along with trembling strums, makes 'Farewell To Whisky Chess' a rather shrill affair. I was going to say it doesn't get going until a certain number of minutes had elapsed and I was going to find the precise time-stamp of said point, but the fact is that this is over nine minutes of intense quiver. The fact that it evokes the highlands in entirely dramatic fashion it not an excuse for you to dance or have any fun and if you do have any fun to it Adem will come over and give you a lecture on how to polish an autoharp and it will last for NINE DAYS.

Wendy is on Twitter, here. This week a PR person was cheeky enough to send her a review ready-written, in what they claimed was Her Style. It had kooky spellinz and gratuitous sex shoe-horns and she was just meant to drop it in but hactually it made her habsolutely LIVID. Oh alright, and a little bit frisky.