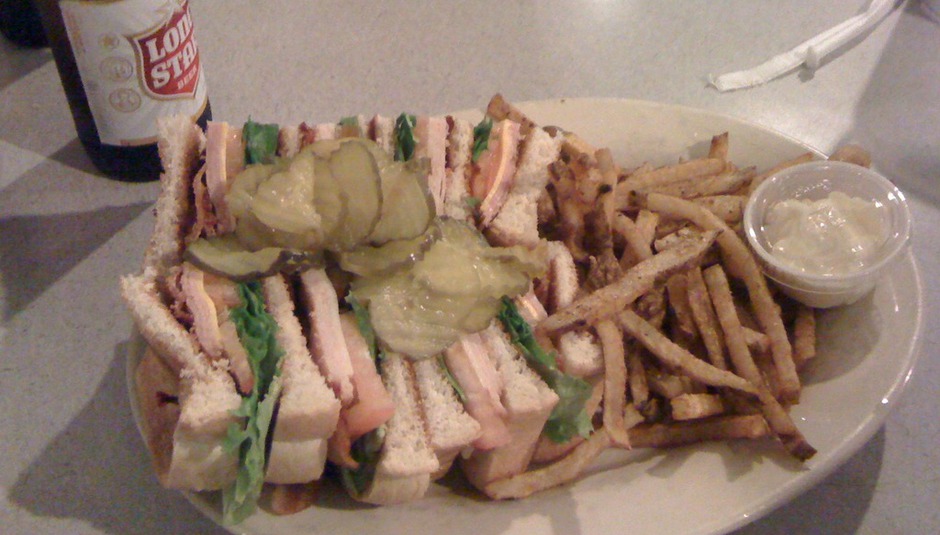 "On our first night in Austin we went out to a late night diner. After a 20 hour journey with 3 different flights, a triple decker club sandwich really hit the spot. Usually I am not able to finish such large quantities of food but I allowed myself in advance to pig out this week with the intention of coming back at least a stone heavier or else I would feel cheated. Food was almost as big a part of this trip as the whole music side of things. Throughout the week we had to keep reminding ourselves that we had shows to do as we kept forgetting and thinking we'd just gone on a lad's holiday in the sun. We were out in Austin with fellow Scots: The Twilight Sad this added to the lad's holiday feel of the week. We mainly tended to hang about in an area known to us as "The Cage" which was basically a fenced off area just off 6th Street which provided artists with free booze and hotdogs. On one memorable occasion in "The Cage" I had to physically drag Johnny Doc of Twilight Sad out of a rap battle with members of The Wu-Tang Clan before he bust out his famous "Suck a guy's dick" rap. That night I also got the world's biggest pizza slice for $3 which, when handing it to me, the server said "Welcome to America". Another memorable day at SXSW involved me going to a house party about an hour out of town. By the time I got there I was sunburnt and really needed a beer, which was provided free of charge as long as you tipped the girl a dollar or gave her a cigarette. The atmosphere at the house party was brilliant and I got to watch one of my favourite bands Moon Duo play in what was basically someone's living room. Greg and I visited a brilliant sea food restaurant (see below) that provides you with crayons and encourages you to draw on the paper table cloths before they dump a bucket of food directly on the table. When standing washing my hands in a toilet in a restaurant a large fat man entered and walked up to the children's urinal and pulled his trousers and underpants down and began urinating and screaming. I took a photo for posterity (LOL). The apartment we stayed in was about 40 minutes walk out of town. Each day we passed by this BBQ restaurant with the slogan "You don't need no teeth to eat my beef!". The area didn't feel entirely safe but on the last day we plucked up the courage to take the photo. That same night Johnny Doc busted out his previously mentioned rap on this same street on an unsuspecting audience.

The last image I will leave you with is of Henry the puppy biting my hand as I get ready to go to the airport. Henry was living in the apartment we were staying in and and kept hiding my shoes and socks every morning. Our shows went well and it was good to meet people on the other side of the world who had not only heard of us but were requesting specific songs of ours.