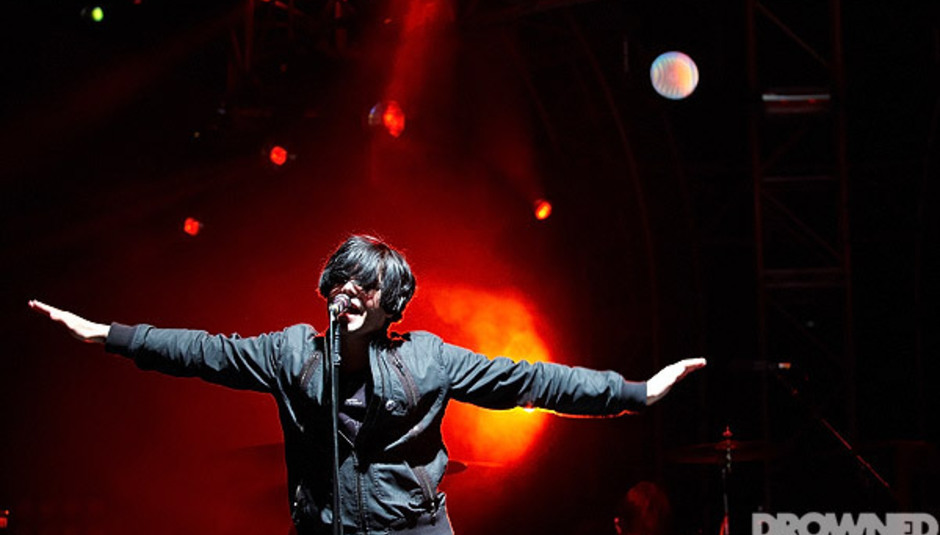 Currently entering their twenty-fourth year of existence, The Charlatans can lay claim to being one of the great British musical institutions of recent years, not to mention a bold advertisement for longevity in a mostly sterile market-driven industry. Last year's Who We Touch was their eleventh long player to date, and with no sign of the five-piece calling things to a halt in the foreseeable future, a follow-up must surely be imminent.

On 21st March, the band release a deluxe edition of 1999's Us And Us Only, arguably the record that marked a drastic seachange in both The Charlatans' sound and dynamic up to that point. More poignantly, it was also the first album put together by the band after the tragic death of original keyboard player Rob Collins in 1996, and over time, has cemented its status in both the hearts and minds of fanatics and critics alike as one of their most acclaimed collections.

When presented with the opportunity of firing some questions at iconic frontman Tim Burgess, DiS didn't need to be asked twice...

DiS: It's twelve years since Us And Us Only was released. Did you expect it to still hold such musical significance so long as it has done, whilst separately creating a new chapter for the band in terms of musical direction and fresh ideas?
Tim: A lot of people seem to think it's a great album...

DiS: Obviously the most significant factor around Us And Us Only was it was your first release after the tragic death of Rob Collins. How difficult was it at the time to put a record together and were their times when the band seemed as if it wouldn't continue?
Tim: At the time it felt quite dark, and it was quite a hard record to make in many ways as there were huge shifts going on within the band. I was in the process of moving to Los Angeles, it was the first release without Rob, Martin Blunt was going through a really messy divorce, our accountant had run off with £350,000 pounds and hadn't paid our taxes for five years, and it was our first release for a major label. There was no real question of giving up though I am sure it crossed our minds once in a while. One huge positive was that with our advance from Universal we built our own studio space which allowed us to grow and rebuild quite naturally in private. If anything we felt even more like outsiders than usual. We were really detached. But it was good! A positive experience.

DiS: It marked the start of Tony Rogers' career as full-time keyboard player within the band. What dimension did he bring to the recordings and was it a strange and daunting experience for all parties working with a new keyboard player after so many years with Rob?
Tim: Tony was very confident in his ability as a keyboard player, and he was a big fan of the band. He was the cheerleader in many ways. And he could sing and also write.

DiS: Looking back at the album today, which songs stand out as your favourites and in hindsight, is there anything you'd do differently in terms of the recording process or tracklisting?
Tim: I think... 'Senses', 'Blind Stagger' and 'Watching You' stand out as great tracks on the album, while 'Forever' is genius live. I was in love with the demos of 'Blonde Waltz' and 'House Is Not A Home'. You know how it is !? I never felt we re-captured the demos, but hey, that's a personal thing!...On the whole, I think the track listing is good, but it's not really about what I think is it? There are enough people who get in touch with me and tell me it's their favourite Charlatans record. You make an album and release it to the world and hope it's good enough and in hind sight with Us And Us Only the world decided it was pretty good.

DiS: Your sound seemed to change dramatically with Us And Us Only. Was this something you had been planning for a long time or did it just occur naturally?
Tim: We felt with Up To Our Hips, The Charlatans and Tellin' Stories that we had grown with each album, developed the sound with each release. Tellin' Stories was when it all crystalised, went massive and we were playing arenas. I was on a huge Dylan trip, I felt that Tellin' Stories was our 'Blonde On Blonde'. When Rob died that was our time to convalesce so at the time I felt we were recording our equivalent of John Wesley Harding. With five people in a band and ever changing lives and circumstances the sound was bound to change. We never had a conscious decision to change our sound until the next album Wonderland, where we allowed Los Angeles to join as a sixth member and take over the band, again in a good way.

DiS: Songs like 'Forever', 'Impossible' and 'My Beautiful Friend' have gone on to be staples of the band's live set over time. How do you think the rest of Us And Us Only fits in with and compares to the rest of your back catalogue?
Tim: I don't know really. We just play what we want when we play live. We have played pretty much everything from Us And Us Only at some point in time or other. It's awesome to be able to have such a choice of songs to plunder from for a set list. Songs are chosen depending on the mood of the band and Us And Us Only is a well moody album.

DiS: The deluxe version to commemorate the album's re-release features several radio and television sessions. What made you choose these particular versions and do you think they highlight the band at their strongest during this particular era?
Tim: I think it's good to represent the times, document the era as honestly as possible. We were a bit shell shocked on the Jools Holland show, that's why I like those recordings but check out the Jagz Kooner remix of 'My Beautiful Friend' for total fuck you-isms! That's why I love The Charlatans, one minute full of bravado, next minute totally fragile. Deluxe versions are for the fans and we have these recordings in the vaults, so it's good for them to see the light of day in this context.

DiS: In terms of the band's overall output, where does Us And Us Only rank alongside The Charlatans other records and if you had to choose one particular record or song as being definitive what would it be and why?
Tim: I think Us And Us Only was a peak. We have had many peaks but this was one of them. It's a lot of people's favourite record which means a lot to me. My favourite albums change all the time but at the moment I would have to say Who We Touch and You Cross My Path. Definitive song? 'North Country Boy' along with that song on our new EP 'Warm Sounds'. We wanted to shine a totally new light on it and we went for a Nirvana vibe. Big songs can become over familiar and lose their power. I'm not sure if we pulled it off but feel free to let me know!

DiS: It was also the first time you had worked with James Spencer. What did he bring to the recordings, and what has he brought to subsequent albums Wonderland, Up At The Lake and You Cross My Path?
Tim: Jim is very underrated. He is awesome! He aged twenty years during the making of this record. We (The Band) were out of our minds! Us And Us Only was recorded in its entirety with Jim at The Big Mushroom, our studio in Cheshire. Wonderland was recorded partly in The Big Mushroom but mixed in its entirety by Jim - most of Wonderland was recorded in LA with Danny Sabre - while Up At The Lake and You Cross My Path were both recorded by Jim at The Charlatans Studio. I trust him with our sound completely and we work really well together.

DiS: Will there be any live shows or a tour to coincide with the re-issue, and if so will it be in a similar format to last year's 'Some Friendly' shows where the album and its accompanying b-sides are aired in full?
Tim: Maybe...?

DiS: Last year's Who We Touch received mainly positive reviews from most publications. Do you pay much attention to reviews and do such things influence what the band does next?
Tim: I was pleased with Who We Touch and with most of the reviews, but I cant really remember what any of them said, so I would say no, it doesn't influence what we do next.

DiS: Finally, are there any plans in place for a follow-up to Who We Touch and what are The Charlatans doing for the rest of this year?
Tim: Mark and I will be going out on an acoustic tour to coincide with The ten-inch EP Warm Sounds. There were venues around the country where I had seen bands and had been jealous of the intimate nature of the gigs, the size of the gigs we were playing in the UK in 1990 but have only had a few chances to since. Places like the Deaf Institute in Manchester and Union Chapel in London. We re-recorded an acoustic version of 'The Only One I Know' for film maker David Lynch, and also versions of 'Oh! Vanity', 'Blackened Blue Eyes' and 'North Country Boy' for another project that didn't eventually work out. We were all pleased with the alternate versions, so it seemed like a good idea to put them out now!

The Charlatans acoustic tour dates can be seen in full here.

The deluxe edition of Us And Us Only is released as a double CD and download album on Monday 21st March.