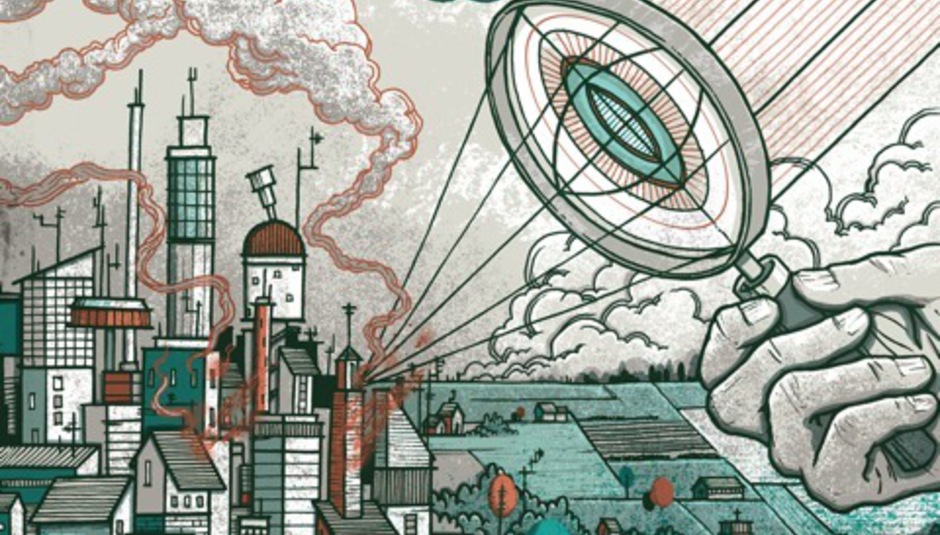 This was started a mere two weeks before we set off for Dallas to record the album. Martin was adamant that none of the tunes we had were appropriate album openers, so set the unenviable task of pulling a killer tune out of our ass within a fortnight. Once we got the first groove and analogue bass-line down, it pretty much wrote itself, though. It's the only full band piece on the album that was not recorded totally live, as we didn't have time to learn it all well enough, so we did it a section at a time. It also features a cheeky vibraphone solo, which was a last minute addition.

This tune is based around a simple guitar loop that Lee made, and it has a 'Lone Ranger'-style galloping-feel to it in places which had Congleton prancing around the studio pretending to be on horseback. It also features the toy Yamaha keyboard quite prominently, including a solo near the end that reminds Pete of the theme from the 70's Spiderman TV-Movie series, although I've never heard that so if I did steal it then it must be because of the cosmic Spiderman-vibes floating around in the collective consciousness of humanity. The kick-in at the end was based around a drum-loop in the demo-version that contained a happy accident that turned out to be un-replicatable, so you'll never know how much more awesome it could have been.

This was a tune that we had kicking about for ages, and we had the chorus sorted, but we couldn't seem to get any verses to fit. In the end, me and Lee took it away and separately wrote our own interpretations of the vocal part. Neither seemed to really nail it, but when we overlaid them on top of each other, each seemed to fill the gaps that the other one had left. This is probably the tune with the most overdubs on as well, although you might not think it to listen to - various layered guitars and vocals building up to the chorus and end-section. The second half is, in the words of Bill & Ted, most triumphant, and gave the tune its working title, Triumph 50cc.

'Later Than You Think'

Another tune based around a guitar loop, although this time the loop runs almost throughout the whole thing. This was written entirely by Lee, pretty much in one afternoon, and is probably the oldest tune on the album. It also kick started the new writing method we applied of demo-ing everything as we wrote it, as opposed to just recording jams and developing them into full pieces. It starts off with some delicate chord swells, and features some almost Afro-Cuban rhythms in the mid-section, as well as a killer guitar riff and a blizzard of distorted piano arpeggios.

A collaboration with the spectacular vocal talent of Stuart Warwick, we put this one together with him or Nancy Elizabeth in mind for the vocals, but Nancy was busy and Stuart was coming to Leeds to put vocals on another track that never happened, so ended up on this one (which was fortunate, because the results speak for themselves). He wrote and recorded his parts (there are sublime harmonies and looped vocals all over it) in one afternoon onto the demo, and then we just took the wav files to Texas on a memory stick to lay over the final recording. The name was his idea, so don't ask me what it means, although I'm told it's in part a reference to a book called "The Butcher" by Alina Reyes.

This is definitely the filthiest riff we've ever written, and most of it is done with just the bass (with a terrifying amount of distortion) and the toy keyboard put through a Line6 FM4 effects pedal. We were jamming one day, and this little syncopated bass line came up, and we just kept it rolling around until it fell back into time again. This is probably the only tune on the album with a bunch of time-signature changes, as we tried to make the album as a whole a bit more groove-based and danceable, but even so you can still nod your head to most of it, as there's an underlying 4/4 beat to the main riff. The ending was a tricky one for this, and we went through about 8 different ideas before we decided we'd nailed it - now it's my favourite moment on the album. Also, Congleton was particularly chuffed with the bass tone on this recording. It does rip the shit though, so fair one.

This was another one that Lee did by himself, and the album version was actually made simply by Congleton remixing the demo with his awesome studio equipment and Grammy-Nominated ears. The white-noise that you can hear as the guitar swell fades is actually the background noise from the recording, pushed up by some heavy compression into the foreground, before being pushed back again by the next guitar swell. It was written in memory of the well known 'Cosmic Mind' blogger Rik Clay, who was a personal friend of ours and well known and loved in and around Leeds. The ambient noise at the end is a field recording of the stream that runs through (Paper-Chase drummer) Jason Garner's back-yard.

We had this really chirpy little riff kicking around for about a year and a half, but every time we tried to do anything with it it just ended up sounding cheesy and lame. One night me, Pete and Lee were sitting around after a gig in The End bar in Newcastle, jamming the riff on three acoustic guitars, and it suddenly all made sense. All we had to do was keep it clean and quiet and it stopped being cheesy and just sounded really sweet. We eventually got around to demoing it in the last few months before the recording session, and I wrote some words to a melody that Pete had been messing with on the guitar. That took care of the first half of the song, but it kinda sounded like two verses and no chorus, so we clearly needed some finality to be added - which came in the form of the massively overblown ending (suprised?) with a 4 minute bass drone, guitar and synth wig-outs, feedback and some kick botty drum-beats. In contrast to Art/Choke being the most filthy thing we've ever done, this is definitely the most uplifting and genuinely happy thing we've ever written by a long shot. The quirky little outro was recorded live with one microphone in Congleton's studio, with me on guitar, Pete on banjo, Tim on vibraphone, Lee on theramin and Martin on waterphone, which is like a spiky UFO full of water that you play with a bow. It also features a sample of the French spoken-word poetry legend, Baptiste Goichon.

This was a piece I wrote myself, originally meant as an ambient intro to the album, but it was a bit too long, and worked much better as an outro. It features some icy synths, some difficult-to-sing harmonies, and Martin's sister Helen on viola. I liked (Meatman-video) director Kira Zhigalina's description of it being "like walking through a meadow of frosted dew", or something to that end. The title (taken from the lyrics) has solar connotations as well, which goes nicely with the album title.

For more info about Vessels and details about Helioscope, visit vesselsband.com

Helioscope is out on March 21.