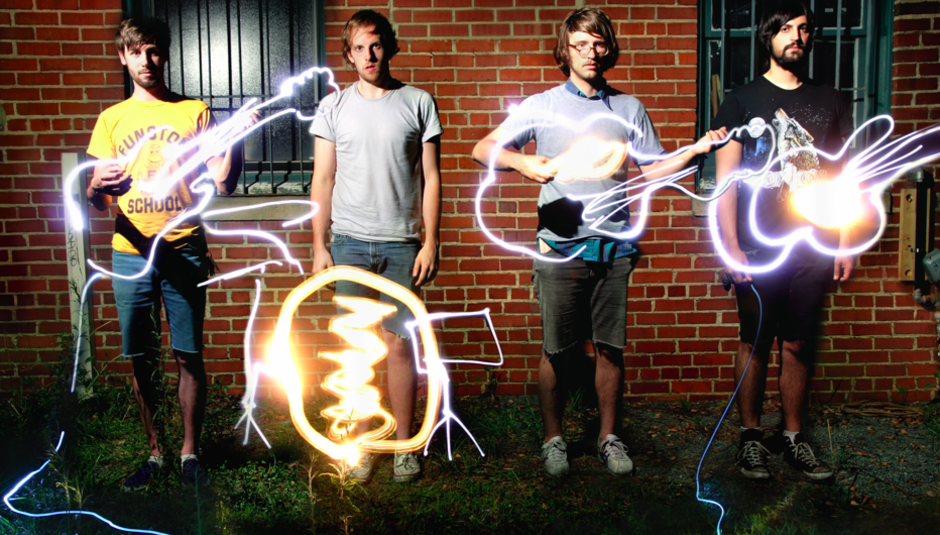 Maps & Atlases’ debut LP Perch Patchwork may have been released at the tail end of 2010, but they already feel like mainstays in an industry not-renowned for longevity. It’s been seven years since the Chicago-based quartet, made up of Dave Davison, Erin Elders, Chris Hainey and Shiraz Dada, started belting out head-screwing slabs of technically challenging sound. In that time, they’ve been lazily lumped in with the city’s math rock luminaries, spat out as Foals’ kindred spirits and, more recently, huddled together with the likes of Dirty Projectors and Grizzly Bear.

Yet, Maps & Atlases are every inch their own band. And as much as it’s smeared in familiar overtones, Perch Patchwork felt like an intentional shunt in direction for an outfit dogged by the burden of expectancy. It’s ostensibly a pop album, but one laced with complex time signatures and thick instrumental textures. Such twists were no doubt expected by long-serving fans, after all the band have always displayed a tendency towards melody, but for those looking for the grey-matter gnawing math of old, the record did little to satisfy their craving.

So before a recent show in Edinburgh, we caught up with guitarist Erin Elders to find out a little more about the band’s turn in sound, how they prepared for a less-than-welcoming reaction and the challenges of being successful in the modern day music industry…

Erin Elders (EE): It’s going well! We are really excited to be in Scotland. Plus the weather makes us feel at home. Chicago is pretty grey at the moment.

I’m not sure this weather could be considered ‘homely’, but I’ll take your word for it. You’ve got a heavy European tour schedule coming up. How are you coping so far?

EE: Well, I’d say, but it’s still early on in the tour. We will have to see how we are holding up in a few weeks. We are definitely looking forward to going to a lot of places on this tour.

Now, Perch Patchwork’s been out for a wee while. It marks quite a change from your early EPs You & Me & The Mountain and Trees, Swallows, Houses. Was that an intentional shift in direction to move away from the math rock tag?

EE: I think it has been a gradual evolution. Tree, Swallows, Houses was us getting into a room together with instruments and seeing what happened. You and Me and The Mountain was us looking at what things worked well on the previous EP and then running with them while also chiseling the songs down a little more. Perch Patchwork is a continuation of that I think. We have never been concerned with the “math rock” tag, but we do want to make music that people can relate to not just on a cerebral level. But it’s funny because Perch Patchwork is musically the most complex album we’ve made. It’s the first time we have done key and tempo changes in our songs and there are also some of the most out there time signature changes we have tried.

I’ve noticed in some places, the change has been put down to you guys being more willing to play ball. How far away from the truth is that? You don’t strike me as compromisers.

EE: Perch Patchwork was actually completely finished before we signed to either of our labels. Barsuk and Fat Cat are also two artistically minded labels that would encourage their artists to experiment. Which is one of the reasons we are excited to be working with them.

When we spoke a few years ago we discussed your approach, or lack of it, to self promotion. But you seem to have changed tact of late. Are you beginning to see the need for interviews now or is it more you feel like you just have something to say?

EE: I wouldn’t say that we are any better at self-promoting, we still tend to stay focused on writing and performing the best we can. But it seems like it has gotten easier with the help of others. I don’t think we would be very good at convincing people to listen to our records. But luckily we work with some great people who believe in us.

Perch Patchwork came out to some mixed reviews (it got 5/10 here), perhaps because it represented a change in sound and also because it’s a record that takes time to really sink in. Is that something you were prepared for?

EE: I think the record is a slow burner and might take people some time. It was something we were sort of prepared for. But most of my all time favorite records took me a long time to get into. I remember the first time I heard Kid A, and not that I’m comparing ourselves to Radiohead in any way, but I just remember not liking or getting the record, and now it’s one of my favorite albums. So I’m actually kind of excited about it. And considering that, I feel lucky that the album got a relatively warm reception.

Well, the record is technically excellent but conveys a distinctly a pop aesthetic, which I think probably threw a few people. That was a big risk for such a young band. Does commerciality ever come into your song-writing process?

EE: I wouldn’t say we ever think in a commercial sense, and most of our ideas are probably counterintuitive to that kind of thing. But we have always loved pop music. Even with the early stuff I think you could probably pick out a little Otis Redding or Motown in there. That has kind of always been our goal, to make challenging, experimental music in a pop context. I don’t think pop music has to have a negative connotation.

Would you ever consider ditching the complexity to make something that’s more radio friendly?

EE: We always talk about how fun it would be to try and make a punk record or something. I mean not for any reason other than having fun and that we all really like punk music. It wouldn’t be a Maps & Atlases record though. In the context of this band I think we would have a hard time doing something like that. Together we all think rhythmically, like a band full of drummers.

A band full of drummers, eh? If only. So, do you understand why some bands do change their sound so it's more commercially alluring? It can be a pretty difficult industry to break doing it your own way?

EE: I do. And there is a lot of great music that is really radio friendly. I like a lot of top 40 radio. I think it’s just more of a matter of staying true to what we do well as a band. It wouldn’t make sense if Maps & Atlases came out with some club song. But it’s great when Drake or Rhianna does it.

Am I right in thinking there were some hallmarks of pop past, like of The Beatles and Paul Simon, tucked away in the record?

EE: Totally, we are really influenced by classic rock. We grew up on bands like The Beatles, Jethro Tull and Simon & Garfunkel.

It’s quite noticeable that Dave’s vocal came more to the fore on the record than on the EPs. Is that a confidence thing or is it a natural change accompanied your progression musically?

EE: I think it’s just a part of the natural evolution of our band. The songs are a little more concise and the ‘song’ is more of the driving force behind things. The vocals are also acting as other instruments on the record. If we had a melody that would be great for an oboe but couldn’t get an oboe we just did it with a vocal line.

The album’s title track was a marked change in sound, even from the rest of the record. It feels like you’re starting to consider arrangement and composition more. Is this something you’d perhaps be looking to do more of?

EE: Experimenting with different instrumentation is something we have always wanted to do. This was just the first time we didn’t let the record be finished until we got everything we wanted. We had certain instrumentation in mind early on for a few songs and it didn’t feel like they were done without it.

You seem to have been around for a long time, but you’re still a relatively young band. Are you still learning about what you can be as a group?

EE: Hopefully there is always more to learn as artists. It’s one of the reasons we are still going as a band. Playing music is still fun for us because we are always trying to learn new things and push ourselves further as musicians and songwriters.

Despite the math tag you guys were once branded with, I’m now seeing a lot of comparisons with bands like Talking Heads and Dirty Projectors flying around. These are bands who were, or are still, around for a long time and constantly evolved. Is that how you guys see yourselves?

EE:I hope so. We really respect both of those bands and would love to follow their career paths. Both are incredible artists who have made great music.

Finally, in two albums time what kind of band do you think Maps & Atlases will be? My bet is thrash metal…

EE: I really have no idea. I like that I don’t.