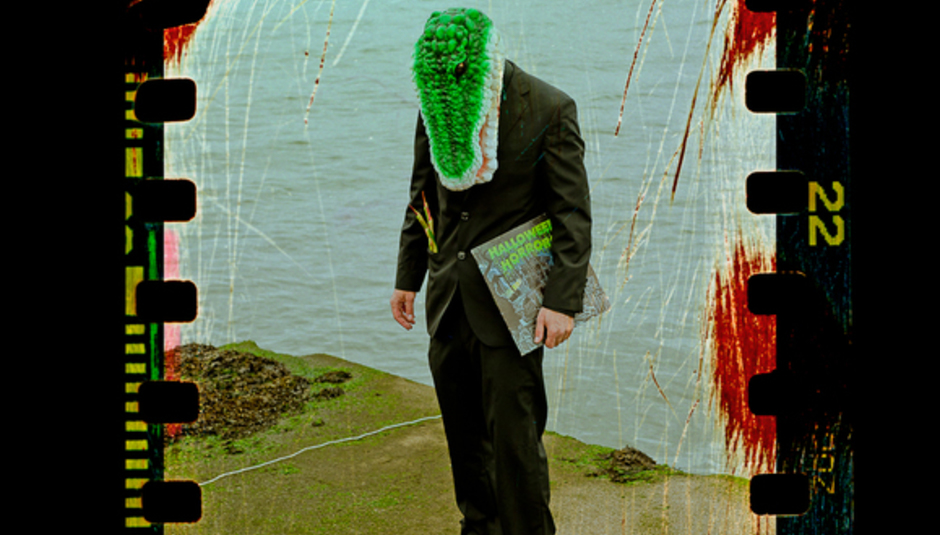 Avey Tare’s first solo project away from Animal Collective always looked a difficult prospect. Written just after the death of his grandmother, his sister’s hospitalisation with cancer, and the breakup of his marriage, it was always going to be a particularly introspective record. Add to that lashings of strange swamp imagery, from the crocodile skull cover to the squelching, watery samples that suffice the record, and it seems almost impenetrably esoteric. And yet Down There works - ambiguous enough to defy interpretation, soul-searching without ever navel gazing; a netherworld of beats and samples that draw you closer with each listen. DiS caught up with Avey Tare (a.k.a. Dave Portner) to discuss Down There.

Was it always a conscious decision for you to write a solo record, no matter what? Or did you start writing these songs as a reaction to what was happening in your life?

I guess I didn't have it in mind to do a record at first. I started getting some new equipment and instruments and usually when that happens I start writing new or different kinds of songs. Some song ideas did start popping into my brain around the end of 2008 and that's really when I started working on the songs that would become down there. I guess I felt that if I could write enough songs that I was psyched on I would do a record at some time. But I didn't start with any definitive plans.

Were you trying to write songs in a different way to your work with Animal Collective? Or was it a continuation of the same method?

In a certain sense it's just a continuation because when I write a song, it sort of comes out of a melody that has come into my head or I just sit down and mess around with an instrument. I don't sit down and think, I'm gonna write an Animal Collective song or I'm gonna write a song just for myself unless there's a project like ODDSAC [AC's video/music project] where it's predetermined what the song would be for. It's not really till later in the process where I decide what I want to use the song for. But since I wrote all of the songs on down there while at home in my apartment, I started thinking somewhere along the line that I wanted to do something that felt more bedroom minded or constructed than something AC would do. I started to want the songs to feel like they were just being performed or written by one person and not a band. In that sense it became something different than AC. Had you written much without the band before? Did it come naturally, or was it a struggle at first?

It was a struggle to complete certain aspects of songs, to know whether the production was cool or if it was shit. But for the most part it felt really good to do.

Having spent so much time with the band, recording and touring, did you feel it was necessary to work on your own for a while, or was it more a result of circumstance?

I think it's always necessary for all of us to do stuff on our own. Whether it be music or other stuff. I think it's the experiences we have on our own that inform the stuff we do as a band a lot of times. Maybe this is because most of the stuff we do together these days just involves touring or recording. I think for my own head, it's just been nice to have a break from touring though now I miss hanging with the other guys.

How does creating music through samples differ from ‘live’ recording? Does it affect the structure and development of the songs themselves? Or just the way they sound?

For me working with samples becomes a lot more cerebral because you can't just make the sample play whatever you want; I guess in that sense songs made from samples become a lot more studio driven than live. I think this applies more to Animal Collective than it does my own stuff because at least with the songs on Down There I was using sequencers, synths, and oscillators and so it was a bit easier to rearrange and write new lines in real time. It's harder to do that with samples cause if you want to change something, than you need another sample or another way of changing the song. We've had fun (AC) the past couple years but I still find it hard to use samples live and actually still feel like your getting the full vibe of people playing together. I think in AC we'd like to move away from that. It's always really important for me and for AC to make things feel organic and that's where using samples becomes really tricky.

Was it a conscious decision to make Down There a fully electronic record? Does that reflect the kind of music you listen to at the moment, or was it more tied in with achieving the kind of aesthetic you had in mind?

I think it was just easier because it was just me and I guess making music or songs on my own with electronics made more sense or felt more comfortable then trying to play all these different instruments or assemble a band. I guess part of that does come from being really into techno, electro, dubstep and being inspired by the production and the fact that it's usually just one person making the music. I think it's sweet when that kind of music sounds organic and so it inspired me that way.

Why did you want to fill Down There with swamp imagery? Why is the swamp ‘hell’ to you, and where did that imagery come from?

I don't really think the swamp in general is hell. Like the bayou or something. In fact I find the swamp to be really beautiful. But it also has a very scary mysterious side. I think the swamp influence just started more with the sounds I wanted to create. I wanted everything to have a real murky wet feeling. But then once the songs started coming together I wanted to fit them all in some place. I guess because of how I was feeling most of the time combined with the mood I wanted the music to set it was just appealing to me to try and make it feel like it was all coming from a haunted swamp. I think the hell aspect of it is more personal to me and to how I was feeling and I don't really expect everyone who listens to the album to feel that. For me that has more to do with the creative process. Having recently watched Werner Herzog’s Bad Lieutenant, he uses lizards and the swamp to suggest a world where chaos is encroaching, where order and meaning have broken down. Does it have a similar resonance for you?

For me it feels more in human a place where humanity doesn't belong. I sort of see it as being a lonely place for a human I guess. It's somewhere you get lost.

Obviously the record has a strong electronic influence, but were there any particular singers or songwriters you had in mind, or that inspired you when you were writing and recording?

Obviously I'm a huge dub fan and so people like Lee Perry and King Tubby are huge influences. Singing wise I'm influenced by everything from Ethiopian singers to people with more loud harsh singing voices like Kurt Cobain or John Lennon or Otis Redding. I like people who just step out onto there own branch you know? and kind of do their own thing. People like Kate Bush, or Ariel Pink, Black Dice.

Down There ends with ‘Lucky 1’, which seems very much to leave the record in the balance, between feeling ‘lucky’ and confronting the ‘sad’ days. Was writing the album more of a cathartic process than your previous work? Of working through and exploring difficult emotions?

Sort of. Writing music always goes hand in hand with emotions I am feeling at any given time. I guess a long the way these emotions always seem sort of difficult, even the good ones sometimes. But I think they translated the best or most obviously on this record (Down There). Maybe it's cause I didn't really have anything else on my mind to sing about at the time or maybe it's cause all of the songs truly have been generated by these feelings. Making this album definitely helped me work through a lot of stuff.

How did you react to the success of Merriweather Post Pavilion? Does it change how you approach writing music, being conscious that you have a bigger audience than ever before?

It definitely has made me think more about playing in front of a larger audience. Makes me think more about who we are playing for and why people are coming to see us. It doesn't really mean it affects the way we perform or write music but I definitely have it on my mind more than I did in the beginning. But in terms of the creative process I think AC and I are going to just keep on doing what feels right or natural.

How do you feel you’ve changed as a songwriter since your early work with Animal Collective? Does songwriting have the same role in your life? Do you approach it with the same objectives?

These days I think a lot more about my musical roots. Classical music and that sort of stuff. In some ways I’d like that to play a bigger part in what I am writing now. But I guess I am always searching for something I haven't encountered before, some new structure, or sound. I feel like everything comes in cycles. There are times I think more about specific sounds and the way they guide songs and there are times when I think more about just basic melodies or skeletons of songs.

How will your experience with Down There affect your future work with Animal Collective? Are these themes going to carry over into your future work or do you feel that, as much as it’s possible, you’ve started to leave them behind?

I'd definitely like future material to be a bit less self involved. I think there is still stuff I'm moving on from but in terms of sounds I think with AC we want to do something completely different so we will see how that goes.