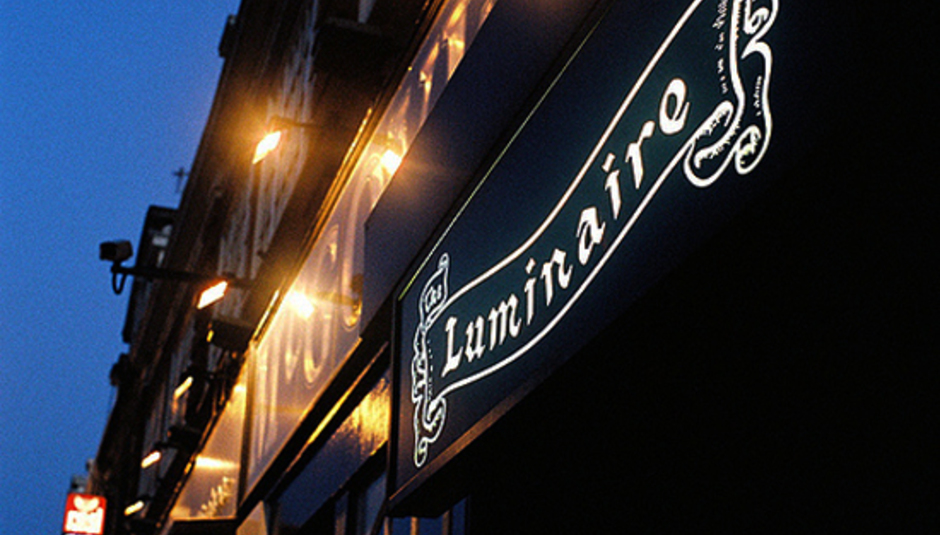 As 'Wake Week' kicks off at the soon to be defunct venue The Luminaire, we talked to Andrew Hung from Fuck Buttons about the venue's importance.

You can see the full line-up for Wake Week here

Why The Luminaire was Important

It was quite shocking to hear that The Luminaire was closing, though with afterthought, not baffling. It stood as a proud haven amongst the culturally desolate surroundings of North West London. A small venue (around 200 cap I believe) on Kilburn High Road; in my mind, it looked like a cross between a strip-club and a David Lynch hotel foyer. As menacing as that sounds, it was a beautiful venue; unique, wondrous and complete in its aesthetic as well as ambience.

Dotted around the venue were white-letterings deploring disturbances (written in quite sarcastic tones). When we played there, we were given a tour around the venue; pampered and looked after. Downstairs, the doorman nicknamed “Big”, who though intimidating in size, was always clutching his book (he likes history). It treated its clientele as well as its artists with absolute respect; good-hearted people ran The Luminaire and in return, its punters loved it. There was a real sense of warmth that came from the place. It was there that Barry Hogan of All Tomorrow’s Parties first saw us and wanted to sign us to his label. Where we accepted that very gig just because of our love of that venue.

When Sean asked me to write a little something about how small-sized venues were important from an artist’s perspective, it got me thinking about the word “importance”. Physically, the Luminaire isn’t remarkable; there are many venues of its capacity around London. It’s performance policy is open to experimentalism but as are a handful of venues around the city. Its location is from my speculation, probably its downfall; being situated in an area with little else happening and away from the youth of east London. No, its importance didn’t lie in its physicality but in its mentality.

There are more shit-hole venues now, that usher you in and out like cattle, with sound engineers who will (whilst being disgruntled) not listen to you and mix your band like a trad-rock band, more promoters who won’t even pay your travel expenses let alone a fee, more Tesco-value crisp riders. You can play or organise a gig any time you want now; it’s entirely possible in this climate where live music is blossoming and with that, it brings a spate of half-arsed attempts at venues. But what was important and unique about The Luminaire, was that its respect of integrity was apparent. It’s important for new artists to see that integrity, to experience it working.

I’m not a romantic and there are very few things within our humanity that I have faith in. Yet I have to believe that in this godforsaken world it is entirely possible for a system or model in which integrity is rewarded. The Luminaire, said with a massive weight in my heart, was sadly not one of them. We have lost one of our beacons of integrity.

The line-up of shows for the final week of the Luminaire is as follows: