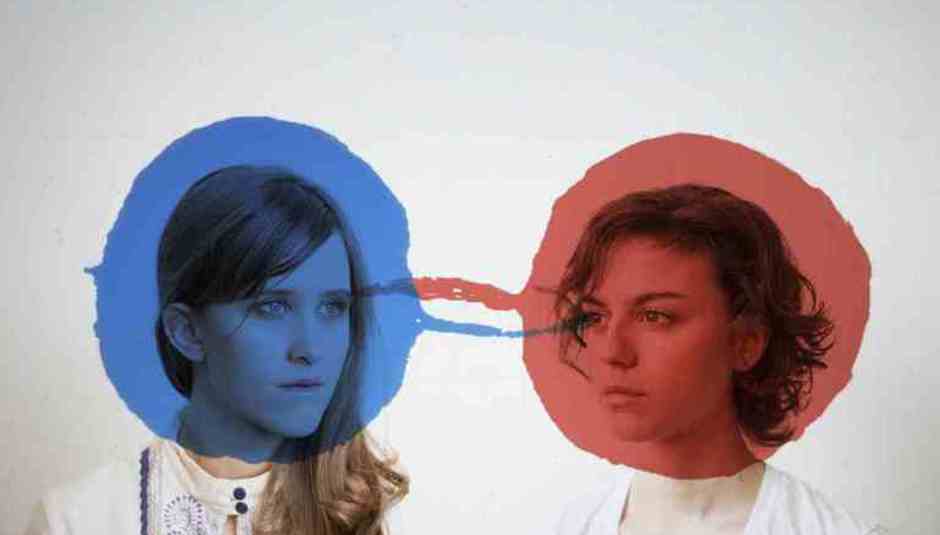 Dirty Projectors - ‘As I Went Out Went Out One Morning’ (Domino)

In the very wonderful Election, teenage girl-mistake Tracy Flick is possessed of the sort of terrifying, out-of-my-way ambition I remember almost fondly from my days in telly. And even though Reese Witherspoon does a fine job of pointing her pointy features into the air and business of other people, the filmmakers choose to demonstrate her careerist mania by using war-cry noises. And they just happen to sound exactly like the ladyvocals on ‘As I Went Out One Morning’. EHHHHHHHHHHHHH, is what the women of Dirty Projectors are singing, simultaneously discordant and harmonious, EHHHHHHHHHHHH, and it is a fine noise, as odd and as troubling a sound as people with more determination than EHHHHHHHHHH talent. Really, seriously though now, you watch out for these uckfers, they are poison.

Because Panda Bear is incapable of penning a song I will not fall hopelessly, irrationally in love with, I hardly need tell you this is more of his wonderful same. It has harmonies that go exactly where you (I) want them to, enough hooks for a thousand housekeys and - in amongst all the pretty – the pondering of lost nights where things nearly happened but didn’t. Oh man, I hate those nights.

Should you find yourself rather more inclined towards the skills of Avey you are in luck, because he has one out too. And you DO have to choose one or the other, because it IS a competition, we have to pointlessly compare them. Because I am a professional objective arbiter of things, of course, I find this easy; I should never put my own, fulsome prejudii into my reviews. I simply put on my best Team Tare t-shirt and in a brilliantly - dare I say it, coruscating fashion - assess his sound (or sounds), well aware that it is harder for you, because you are not an expert. In the end, I found that ‘Lucky 1’ came up as sunny as eggs. Because one, it has nicely grating repetitive bleeps that encircle and dizzy the vocals, and two, it has the air of the watercolour wash about it; layers upon layers and all of them vaguely transparent so nothing gets lost. I don’t know what it’s about, but I’m presuming either a) existential dread, b) Aeschylus and the Contestation of Authority or c) the Woman Problem.

Having only just put Tomorrow, In A Year onto my portable electronical music device, ‘Seeds’ was a new one on me. And I wonder if it helped that I heard it at 7am, while leaving the snow for the nave of the cathedral, skipping down stone steps as monstrous as the Lego bricks of Brobdingnag. As regular readers will know I am quite anti-Dog these days; formative teenage experiences with the charismatic movement have tainted me towards his spiritual charms to the point that I actually considered wearing a 'God Is Love' enamel button in an ironic fashion, before I realised that would be hateful. Anyway, even I could not fail to gasp at the ceiling or feel the presence of something, as The Knife wibbled in my ears with their endless bells and the sounds of what could be feet scuffing. In many ways, this is about as far away from the idea of a single as a thing could possibly be. But on the other hand, it is a classically-structured noise painting in which it all goes a bit doom at the four minute mark, and in which a fat lady sings. Impressive and daunting, there is a part of me that wants to gently caress the down on this single’s cheek. But one must also acknowledge the other part, which would quite like to slap it. This is emphatically my problem, I am the sort of idiot who giggles at the theatre.

Matthew Dear - ‘You Put A Smell On Me’ (Ghostly International)

Matthew Dear is a saucebucket, he is always going on about The Sex as if he were a bawdy bar trollop pissed up on gin and shamefully barren of knicker. Luckily I have no problem with This Sort Of Thing - partly because I really and actually did make a playlist called ‘Slink’ that had ‘Baby Did A Bad Bad Thing On It’ last week (OHMY, it is marvellous) and partly because I am a randy old coot. As my Mum reads this column I need hardly point out that NONE OF THIS IS TRUE - apart from the bit about Matthew, whose single is the feline, aural equivalent of Ballard’s Crash, full as it really is with rides in ‘big black cars’ that ‘go real far’, and in which it is up to you to ‘decide if you want to come’. Don’t get me wrong, it’s fantastic. But man alive, is it ever drunk on flesh.

Due to the vagaries of the local post office, this bit of beautiful only arrived this week and it is so joyful on the eyes I could cry; the artwork incredible, the vinyl green. As for what it sounds like - rather like Matthew Dear, and what with a title like ‘Worm Tamer’, as you can imagine it is a song about the board game Ludo, and how it is well annoying when you are halfway round the board and one of your counters gets lost between the floorboards, oh it's tiresome. There is also something about a lady whose nickname is ‘snake charmer’ (EH UP) and a man who chinny reckons his girlfriend calls him The Loch Ness Monster because ‘two great big humps and then I’m gone’ (OH I GET YOU) to the frankly terrifying accompaniment of Cave heavy breathing in sharp stabs right in your earhole. And drums that rumble like the sort of weather there are television specials about. And you know, if I was still fifteen I would look at a man like him; perving his hips and chops through three minutes and thirteen seconds of jagged sauce, and I would think he was the wrongest of all the men alive. But as it is I am twice that age with a cherry on top and find it absolutely hilarious, terrifying and titillating all at once. Also, I’ve only just noticed that the word titillating has the word ‘tit’ in it. WHICH IS QUITE IRONIC WHEN YOU THINK ABOUT IT.

Hemlock Recordings' track record is rather marvels, they have been the initial stable for the likes of James Blake (yay) and Fantastic Mr. Fox (no idea, think is book) but I only know that because I went on their SoundCloud page after I had decided to write about Breton. And the reason I wanted to write about Breton is because they are making electronic music that has heaps of moody sass about it. ‘RDI’ sways like a drunk Christmas novelty earring on a fairground carousel, and though it seems to be sticking two fingers up at you and telling you what a hard life it has had, you don’t immediately clutch tighter at your phone and wallet, much less feel compelled to convince it that you too have seen the darkness. By all of which I mean, this has something of the alleys and lost landscapes about it, but in a strangely stately way, like a hoodlum en pointe.

After I had finished burying my jealousy for Roses Gabor and her heavenly, covetable, peachily glamorous name, I listened to ‘Raver’ and got my good foot on. And because I love it, and because it is larks, I took it out with me. ‘Where my ravers at? Tell me where my ravers at?’ is what I asked at bingo down Gestwick Community Centre. ‘Where my ravers at? I wanna see your lighters up?’ was my clarion call at Happisburgh Whist Drive. And did they pay me any mind? Did they Bungay.

WARNING: Pete Waterman makes an inexplicable appearance in the above videothing. Also, this single goes ‘carnival’ at the three minute mark. So it is basically two songs in one, both of them flipping brilliant.

Of the many things that delight me as a singles columnist, one is the arrival of jiffy bags with the postmarks of art colleges on them. And as Randan Discotheque’s last single was very much the sort of thing a manifesto band would make (it was a single comprised entirely of headlines from a 1982 edition of The Daily Record, it was brilliant), I looked upon their newest work with what can only be described as glee. As it turns out, ‘Heather The Weather’ is a folk paean to a departed weather girl, but it is the b-side I like best. Because ‘The Duke & His Orderly’ is about the history and Spain and war, and because it is a curio and and because it is the-history-lesson-as-pop-song. It also doesn’t go so far down Art Alley that it forgets which way to hang the tune. Some awfully mixed metaphors, for a band I have a great deal of time for.

Patrick is backbackBACK and this is actually quite restrained for him. Obviously it’s still melodrama heaped upon Boucicault, but there is little of the LOVE ME! / HATE ME! dynamic which can infiltrate proceedings when you make prickly, antsy, baroque pop. Worth buying for the strings alone, I think. Lovely, handclappy middle eight, anawl.

The Pains Of Being Pure At Heart - ‘Heart In Your Heartbreak’ (Fortuna POP!)

The Pains of Being Pure At Heart have a single out. It is about fancying girls who don’t fancy you back and/or fancying girls who you used to fancy and who then fancied you and who you then went out with. But now they shiver at your name. 'Heart In Your Heartbreak' also has something of the Breakfast Club soundtracks about it. Never a bad thing.

Banjo Or Freakout’s ‘Left It Alone’ has been on steady rotation round my way all year. And though ‘105’ is quite cloud-like, ephemeral and slight, that doesn’t mean it’s not delightful. I mean, even though it seems to be about wanting to go to sleep for a very long time, conversely it is less head-in-the-oveny than its predecessor. Don’t get me wrong, it’s still woozy, slurred and a bit texting-while-pissed, but despite all that it feels like Banjo or Freakout have grown up a bit. Lore! How contradictory music is.

The Chanteuse & The Crippled Claw - ‘Are You One?’ (Arms Controller)

Kraak & Smaak feat. Sebastian & DJ Git Hyper - ‘Dynamite’ (Jalapeno Records)
I would have preferred it if he had just been called 'DJ Git'.