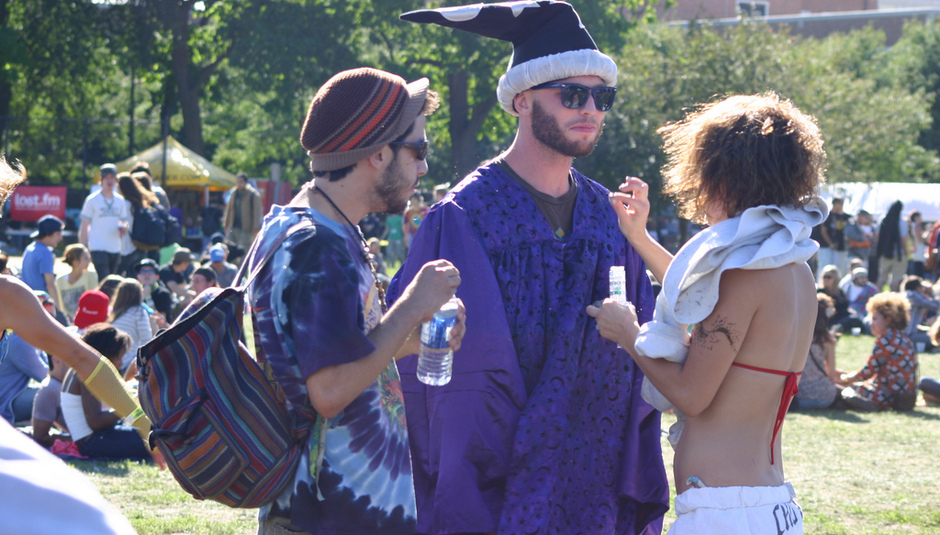 In the first of a series of local scene reports, our scribe in Chicago talks us through what festival delights the city has to offer and chats to Panda Riot.

In a town accustomed to fierce winters and freezing winds blowing off the Great Lakes, summer provides a welcome release for millions of native Chicagoans. It’s an opportunity to dress down and beer up, and the soundtrack to all this sunny preening is a steady slew of festivals that pitch tent as soon as the last school bell sounds in June, and don’t leave until the ‘Back-To-School’ ads start circulating in September. There’s Pitchfork Music Festival for the indie rock types, Ravinia for classical music lovers, and the once venerable Lollapalooza, a shell of its former self, which seemed to cater to music sadists who prefer death to be long, slow and agonizing. As the pedigreed fest slogs ever onwards, compare the legends of alternative music that used to headline, Jane’s Addiction, The Jesus and Mary Chain, Sonic Youth, to the litany of has-beens and fabricated stars that made its 2010 lineup. Lady Gaga, Green Day, Soundgarden? If the Lollapalooza organizers wanted to wind the clock back to the 90s, why are we still paying 9$ for a bottle of water?

Much more promising was a pair of brand new entries, North Coast Fest and Neon Marshmallow Fest, plus a surprise visit from Barcelona’s highly-regarded Sónar Festival. North Coast proved that you don’t need to have the most rigorously curated bill to entice a crowd. Over the course of three days the young festival mashed together a polyglot of electronic, hip-hop, jam band, and indie folk, which, in turn, attracted a similarly oddball crew of ravers, b boys, hippies and hipsters. Against all odds a pax universalis reigned among the subcultures and North Coast is looking forward to another go next summer. The future of Neon Marshmallow Fest, on the other hand, is less certain. The experimental music and noise event was as much a happening as anything else. A local blogger described one set by the California-based trio The Haters as follows:

“Their set was simple and effective. A male and female couple stood on stage with two suitcases. Inside the luggage were possibly a microphone and some other loose junk, and the whole rig was wired through a soundboard. The couple raised the luggage above their heads, face to face, and rubbed the suitcases together for about 15 minutes to create a luscious, if somewhat anonymous, outpouring of white noise filth. Meanwhile the third guy stepped into the pit with his own suitcase, and began to attack it with some type of high-powered, handheld sander, sending up huge showers up sparks as the machine came in contact with a machete blade that had been affixed to the suitcase. He writhed around on the ground, attacked the audience with the hot metal spray, and generally invoked the same sort of heated atmosphere you'd get at a hardcore show. A lot of pushing, shoving, hair's breadth from getting out of control sort of stuff.”

A powerful performance, and indicative of the intensity that surrounded Neon Marshmallow. An artistic success, to be sure, but breaking even in the festival business is no cake walk for a Lollapalooza, never mind a niche affair like Neon Marshmallow. Cash considerations be damned, Chicago wants and deserves an encore from a festival that gathered together artists from four continents, including Astral Social Club (UK), Dave Phillips (Switzerland), Justice Yeldham (Australia), Government Alpha (Japan). Lastly Sónar rolled into town and showed us all how things are done in Barcelona. Besides top notch electronic music, discussion panels and film showings filled out the visual/aural experience. A real eye-opener, all in all, that elicited a strong reaction from the local bloggerati, bemoaning the occasionally laggard development of its own electronic music scene.

Nothing good lasts, so the saying goes. Even as Sónar concluded, the days were growing shorter. School came back in session, and special “summer hours” at the office came to an end. But this time of year offers its own musical rewards. When the festival grounds of Union Park vacate, the crowds pack into Chicago’s bustling club scene to catch their favorite acts in more intimate surroundings. Here’s three local acts that are worth throwing on a heavy coat (and, gasp, snow boots!) to go see when the weather turns cold: Panda Riot, Loyal Divide, and Maps & Atlases (read the Drowned In Sound review here). All three acts wowed at North Coast Fest and afterparties. Drowned In Sound was lucky enough to throw a few questions at Panda Riot. Check out the answers below, along with a video tour diary shot on a toy camera.

Stars Like Flowers at Night from panda riot on Vimeo.

DiS: So you all moved to Chicago from Philadelphia? Any noticeable differences between the east coast indie scene and the midwest?

Panda Riot: Chicago has a great Midwest rhythm to it which we like. It's a slower more thoughtful, friendlier vibe, but the Pabst Blue Ribbon still tastes pretty much the same. [ed. note: Pabst Blue Ribbon, or ‘PBR’, has become, in a somewhat ironic and self-deprecating gesture, the “official” cheap beer of indie rock in the States]

DiS: What's some of your favorite venues in Chicago?

Panda Riot: The Empty Bottle is probably our favorite place to play or to go see a show. It's a place where you feel like people are just trying to support what they believe in, not maximize profits.

DiS: What's been one of your most memorable gig experiences since you've lived here?

Panda Riot: Our last gig at Schubas was pretty fun. It was our first show with our new percussionist, Jose. We all wore metallic face paint and it was really a nice moment of band-ness.

DiS: Tell me a little about the genesis of your last EP far & near. Was that the EP you envisioned?

Panda Riot: We had this sense after [previous EP] She Dares All Things that we wanted to make something 'sparklier,' but there is no way of envisioning the final product until it's done.

DiS: What's on the horizon for Panda Riot?

Panda Riot: We're playing the New England Popfest in November, and, of course, we are always working on new material. We'll be coming out with new stuff for sure.

Thanks to Panda Riot for helping to kick off the latest Drowned In Sound scene column! The weather’s turning cold: so zip up the jacket, put the headphones on, and stay tuned for the best in Chicago music.