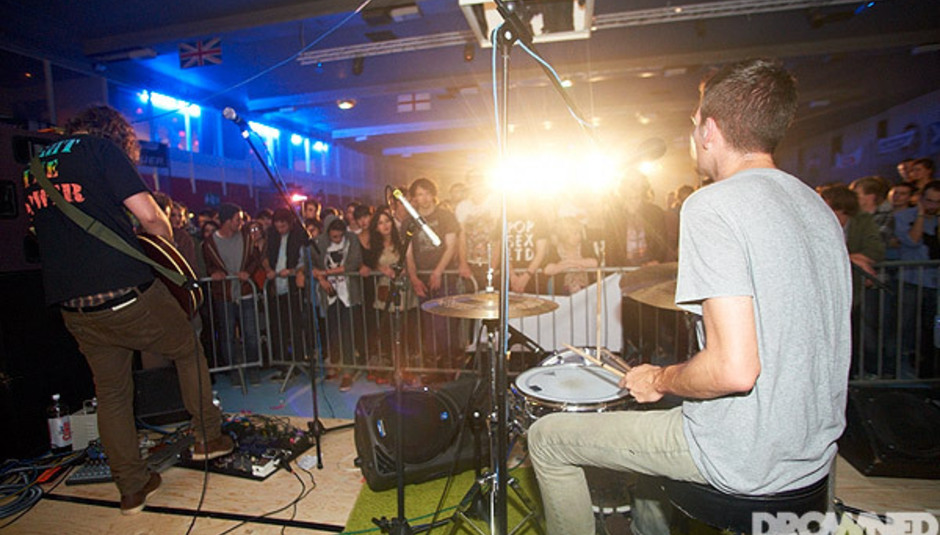 Our Drowned in Manchester columnist (columns here) kicks off a day dedicated to In the City, which gets underway today in Manchester...

“That that don’t kill me can only make me stronger” is the manifesto for the 19th In The City Festival taking place this week between Wednesday and Friday. Meant as a rallying cry ready to greet a bedraggled music industry from their journey up the M6, the coinage stands as an equally appropriate slogan for the event itself. Since 1992 the conference has built bands’ reputations and buckled those of others. Radiohead. Coldplay. Muse. Elbow. Names that get reeled out around this time of October every year but ones that bear repeating in order to remember the potential the festival has to shape and change those that’ll appear in the mainstream. Along side these there are scores of others, who over In The City’s three days have harnessed its energy and vibrancy, bewitched and seduced the suits and satchel wearers only to find the consequences too much to handle. Yet more arrive with hype already in tow only to find it mercilessly pulled from under them – a tuneless performance to twenty or so disinterested individuals in a Piccadilly basement proving the wake-up call they never planned on needing.

And then there’s the panels; discussion that ruminates and tries to anticipate the issues facing the industry – it’s when these various dignitaries come into such close contact with the performing paupers on the live side that you realise the startling disparity between the art and the business looming behind it. Yet for a brief period the lines blur and each side takes a look at one another and recognises something they share – their paths may have split but they stem from the same initial love of music. It’s this, In The City’s live programmer Gavin Cooke argues, that’s one of the reasons why the event has endured; “those who work in music do so because they’re music fans, and you’d be pretty hard pushed to find gigs without any music industry people there. Industry or not, everyone at In The City is there to find great new music.”

Cooke is one of a number of people I asked to muse on In The City, and finds himself booking for an event trying to move away from the stigma of an industry event despite being one of its most-loved children. Forget the bluster of the introduction, change has been necessary. Existing in its formative model as a shop window for bands to try and get signed, outside attention was beginning to wane. Like all else in its sector, the event has found itself in a state of flux; 2008 seemed quieter in terms of attendance and excitement over burgeoning artists and 2009 continued that trend - it took The Drums on the last night of last year to rouse a sleepy Night & Day Café. High Voltage’s Richard Cheetham, who has laid on showcases at In The City for five years now, points out that when he first started attending as a student “it was the only time you'd get to hear or see great new bands condensed into the same weekend. But unsigned acts are able to get themselves heard (thanks to the internet) at any time of the year.” The diversity of artists and showcases remained strong as it always does, but often it seemed that bands were giving terse A&R performances to A&R men that weren’t there anymore. Cheetham agrees “they don't really need to come up to Manchester when it's possible to check out who's playing a week in advance and make a call on whether it's worth coming up for.”

The organisers couldn’t do very much about the talent spotters drying up – it’s not an issue exclusive to them – but it did need to adjust to this change of circumstance and look to re-assert itself somehow. Perennial In The City attendee and ManchesterMusic.co.uk editor Cath Aubergine suggests to me that “[last year] there'd been a bit of a backlash from the local music community feeling they weren't being engaged enough,” and it’s this aspect of the event that it seems keen to return to. Just because it takes place in Manchester doesn’t mean it should bias towards its music community more than anywhere else – as Cath says “you don't go to SXSW and expect to only see Texan bands do you?” – but it is clearly an event that means a great deal to the locals. High Voltage are proud of their five year association with the event and Cheetham admits “it's great to do a showcase of acts that I'm really excited about. I programmed line-ups for two ITC's at Night & Day with about 40 bands playing over the weekend, and it was just brilliant to be in the middle of that.”

An important part of re-connecting with its roots has been this year's move away from the vacuous sheen of Deansgate to Manchester’s live music hub of the Northern Quarter meaning that identikit bars like Chicago Rock Café and Bar 38 have been replaced by The Castle and a recently refurbished Gullivers. These are the sort of earthy, charismatic venues that’ll make the average festival punter right at home while simultaneously forcing any industry types to truly go on a voyage of exploration. “But that’s what the core of the festival is still very much about” enthuses Cooke, “and we have some amazing new bands this year. We’re really confident that whatever venue you stumble into at whatever time you’ll find something really good.”

Mixing The Established And New

A mark of In The City’s evolution has been the shift in the type of act booked this year. No Age, HEALTH and Sky Larkin are all scheduled to play (all three on the Drowned in Sound 10th Birthday stage! - Ed), acts who’ve been around for three or four years and produced a couple of albums each, and they’re joined by the likes of Pulled Apart By Horses, Mount Kimbie and Glasser – names that have already infiltrated the press frequently this year. This is partly out of necessity; similar events have sprung up in recent years - such as the Great Escape and Swn - that mix up their new recommendations with established artists, but also another attempt to move the demographic towards that of the everyday music fan.

Discussing the line-up, Cooke accepts that “the biggest challenge to the festival itself has been the fact that bands aren’t totally unknown until someone discovers their demo from a pile anymore” and so the breakthrough performances of the past are hard to provide. To balance that out it would appear efforts have been made to attract attendees with a line-up that has a little more reach, placing less pressure on the new acts that are on the bill and allowing them to crop up unexpectedly amongst their more senior peers - regaining the element of surprise.

One thing remains though, and that’s the ‘In The City Unsigned’ section. Billed as being the 30 new acts the festival really wants to highlight, its title is perhaps one of the more contentious issues – a title that seems a little outdated for the event in 2010. “The term is probably a bit erroneous these days I agree,” admits the live programmer “but then there’s 19 years worth of history and a huge list of household names that have been discovered under this moniker and it’d be foolish to throw that away – no industry festival in the world has as much history as In The City does.”

Richard Cheetham too advocates the continuation of the category; “It's definitely relevant. A new band I'm managing called The Kill Van Kulls are on the unsigned official list which is terrific. Those slots still are a stepping stone to bigger things so it's an important opportunity to reach out to new people. Those people might’ve changed from industry people to other fellow musicians, bloggers or die-hard music fans, but they're important to reach too.”

It’s this last point that I think's the main reason that In The City remains relevant for both artist and music fan. If an act is up here for the fat advance they’re probably in for a disappointment, but what the event can still do is give them a platform on which to impress themselves upon a concentrated group of enthusiasts of various backgrounds and occupations. In the keynotes the talk will rage about piracy and MP3s, but while the effect of those will lurk around many corners of ITC, the artists themselves are still being provided a chance to reach new people via a sustained live connection, in the way that it always has done. For the fan meanwhile, the multi-venue trawl around the city provides all the usual enjoyment such an event entails; the mad dashes to make a venue on time, the random punt on that oddly named act from rural Wales who turn out to be quite brilliant, beer consumed and the new bonds forged with both new music and new people.

“This event will be relevant as long as we continue to have exciting lineups and inspirational keynotes and this year is as strong as it has ever been” finishes Cooke, “There’s a great spirit around the whole thing; people have a deep affection for it that just doesn’t exist in the same way at similar events.” Long may it continue.

In The City takes place this week between October 13th-15th across the Northern Quarter in Manchester. Three-day wristbands are still available at £29 from HMV.. For who-to-see and further previews stay tuned to the site today and tomorrow.