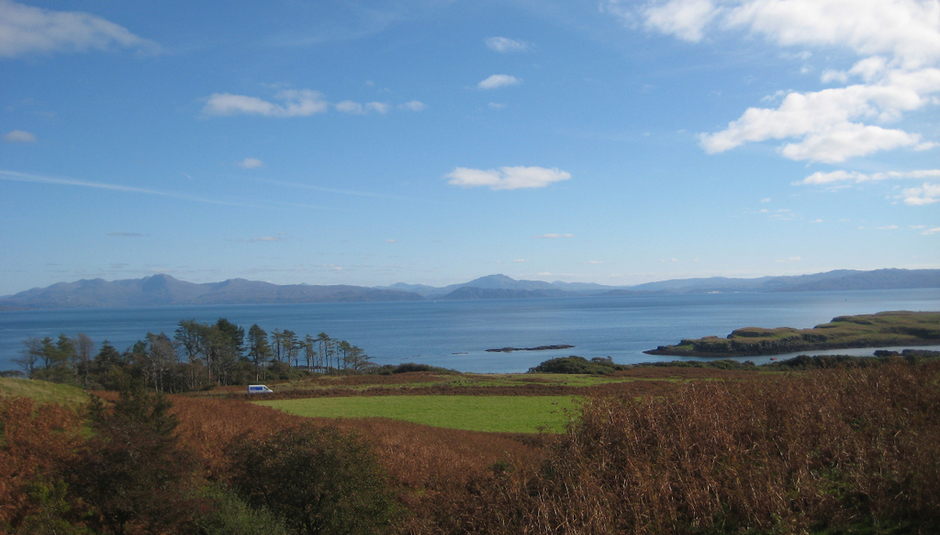 "We have performed at a few off piste festivals this year. Here are the highlights:

Fence Collectives 'Away Game' Festival on the Isle of Eigg

The festival is also put together by Sarah Boden who's family live on Eigg as farmers.

The population of Eigg is less than 100, so the island population is quadrupled when festival goers and bands descend on the island. The island is simply beautiful, with views looking over to mainland Scotland and it's sister islands of Rum, Muck etc.

We stayed in a converted crofters cottage looking over to mainland Scotland. The weather was perfect all weekend. Glorious sun, clear skies, and Manx Shearwaters bombing around the seas. Acts included Fence stalwarts such as The Pictish Trail, King Creosote, and other great acts including Cate Le Bon and Meursault. The main magic is simply the coming together of like minded music lovers, and fans of Scottish islands. There was a bonfire, all night, every night too.

You can visit Massacre Cave where 300 years ago the MacLeods murdered all the inhabitants of Eigg in one of the darker tales of recent Scottish History.Or you could walk to the other end of the island where the lovely beaches overlook Rum, and you can walk on the singing sands which squeek underfoot (one of only 2 in the world apparently). Robert the island's ex-paratrooper got a bit out of hand late one night and had to be bundled into a car. There are no police on Eigg. The local children were essentially robbing the drunken vistors by charging £1 for a rudimentary game of golf (hitting a can with a stick) and you win a jelly bean. I had one go and ended up giving them all £1, so that ended up £6 for a jelly bean. These island kids learn fast.

It took us almost 2 days to get to Traena Music Festival in Norway. It is just south of the Arctic Circle and a 2 hour boat ride from Bodo. Every year they have a UK act, and previously they had Richard Hawley and Spiritualized. This time we were the lucky ones. Traena is an archipelago, with one island Sanna, climbing out of the sea into 3 massive shark teeth peaks.

Being near the Arctic Circle it does not get dark at all. We were over there to play our Man of Aran soundtrack in the tiny island church.

For a full picture diary please follow this link

Sing Ye! From The Hillsides

We put on our own "Sing Ye! From The Hillsides II" festival at the Tan Hill Inn, in the Yorkshires Dale again this year. For those not in the know, the Tan Hill, is the highest pub in the U.K. atop open moorland. This year we had many of the same events as the first festival. Husky Racing, Egg Throwing, Fireworks, Exploding Fruit Champagne, Donut Eating, Pub Quiz, Welly Wanging, Birds of Prey. We made a big effore this year to bring in loads of great bands, with a little bit of help from whale watching pal DJ Marc Riley.

Needless to say, it was a right old knees up."

In Photos: The Vaselines @ Static Gal...