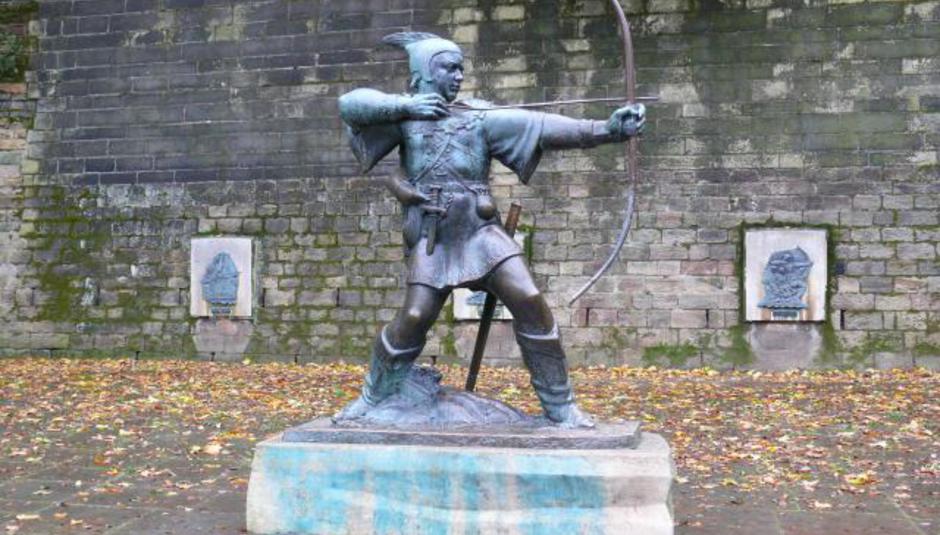 Our first local scene report and gig guide from the city of Nottingham...

With a population fluctuating somewhere between the 250-300,000 region, of which approximately a fifth are represented by students from the city's two universities, Nottingham should be an ever-present hub of creativity, despite its relatively small size in comparison to the likes of Manchester, Leeds and Sheffield. However, unlike the three aforementioned cities, in listing Nottingham's musical achievements in recent years, one would struggle to use up all the fingers on one hand. Six By Seven, Seachange and Echoboy's brief flirtations with minor success a decade ago coupled with Pitchshifter's errant rock noise apart, there really hasn't been a lot else to shout about (and PLEASE, nobody mention one-hit wonders KWS forchristsakes) and aside from the Gringo Records/Damn You! collective, little impact has been made either in or out of the city.

When considering the amount of venues around the city, not to mention possessing a City Council only too willing to part-fund the growing number of festivals which adorn Nottingham throughout the summer, it's something of a mystery why a dearth of local artists capable of making the step up to a more nationally recognised stage still exists.

That's not to say Nottingham's music scene is one great big void, as the next few paragraphs illustrate...

One of the biggest positives for Nottingham's music scene is that it finds itself awash with some of the best venues on the national circuit today. The Rescue Rooms, Stealth and Bodega Social have all become regular fixtures on any worthwhile touring band's schedule in recent years. Then there's the homely confines of The Chameleon, a tiny room above a shop that has hosted the likes of HEALTH, Crystal Stilts and Exit Calm along with a couple of new venue additions in Spanky Van Dykes and The Central. Add the vacuous confines of the Trent FM Arena, where the likes of Paramore and Biffy Clyro will soon be strutting their stuff (as will JLS and Boyzone) along with the likes of Bunkers Hill, Nottingham Arts Organisation and Lee Rosy's Tea Rooms and it's fair to see why Nottingham's gig going public is spoilt for choice in terms of where to go. Of course it wasn't always like this. Rewind a decade and all that was on offer was Rock City, the daddy of them all, rockers paradise The Old Angel and very little else.

The city's dance music scene has also encountered many ups and downs over a similar period, having never really recovered from the loss of influential cutting edge hangout The Bomb five years ago. There is however a resurgent underbelly developing in the underground, with the intimate settings of Moog, previously mentioned Spankys and Stealth, and currently under transformation Gatecrasher all catering for the city's club frequenters.

Although not exactly spoiled for choice, Nottingham does have a handful of bands more than capable of progressing to better things in the not too distant future. Undoubtedly leading the way are teenage five-piece Dog Is Dead. Their debut single 'Glockenspiel Song' coupled with numerous festival appearances brought them to the attention of several radio playlisters in the summer, and last month's follow-up 'Young' on Your Childhood Records looks set to continue their rapid ascent into mainstream territories.

Following hot on their heels are Frontiers, whose complex guitar excursions draw comparison with the likes of The Cure and The Chameleons. Having come to the attention of the same management team that look after We Are Scientists and The Chapman Family, they're currently locked in the studio writing and recording as we speak. In between times, they can be seen at this year's In The City event in Manchester's Noho Bar on Thursday 14th October. We advise you not to miss them.

Another of our current favourites are ambient shoegazers Spotlight Kid, a six-piece supergroup of sorts made up from ex-members of Six By Seven, Echoboy, Model Morning and The Kull among others. They've just released their latest seven-inch 'All Is Real'/'April' on the excellent Club AC30 imprint, which sounds like M83 landing on the moon with Neu! playing in the background.

And that's not all. The awesome Hello Thor label, home to the city's Fists and We Show Up On Radar, has just put out its latest release, 'Let's Eat Soya'/'Lonely In The Digital World' by New York based duo Anxieteam, while psyche rockers Cult Of Dom Keller should finally get around to releasing their long awaited debut album which they've just finished recording with Spiritualized's Tony "Doggen" Foster anytime soon.

With the student contingent both old and new settled for the start of a new term, Rocktober is looking pretty healthy on the gig front, with as many as four eyecatching shows taking place on some nights this month. While one could probably fill this page and several more, here's a selection of some of the shows DiS is looking forward to...

If anyone has any Nottingham based bands, gigs, releases, events or clubnights they feel have been unjustly overlooked please do so in the comments section below. Until next month...

In Photos: Bring Me The Horizon @ Nor...