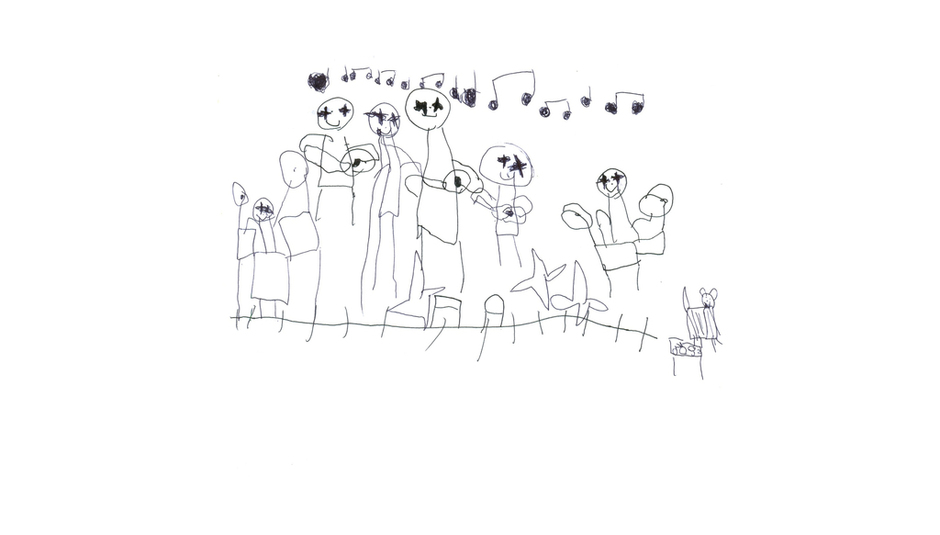 Even though Other People's Chirren are officially insufferable, this week's guest illustrator is my nephew, Jem. He is five and likes football, GoGos and Football GoGos. Here, he has drawn a band with one guitarist, two banjo players and a dog. And in case you salty, jaded malcontents were wondering, they are not high, they just have star-shaped sunglasses on.

Also, as I am sure you will have noticed, they have TWO DRUMKITS. 'So basically, Jem, you've drawn Caribou.' is what I said. 'Wendy, next time you come round will you bring some sweets, because I'm running out' was his reply. KIDS EH. Even though I don't like the name James Friley has chosen for his musical project, I like 'All Packed Up', I like it everso very much indeed and yes. It is a chiming sort of vocal collage and the word that sums it up better than any other is LILT. It lilts, it sways in front of you like a hypnotist's medallion, and you don't really even mind that Idiot Glee are going for your zipper as you remember past lives where the fate of mankind rested solely in your hands, because you really were Pasteur, Gallileo and Antoinette, and definitely not Barry from Slough who spent his whole life selling Amway cleaning products to bored housewives and soon-to-be-ex friends.

There are a few things it sounds a bit like, but because such comparisons are invariably a bit reductive and should be used sparingly, I shan't bother. All you need to know is that this is the song to listen to this week as you sidle into sheets of rain, this is the tune to reach for when your head goes all lead-like and someone says something pointless (but well-meant) about how you get nasty colds 'when the weather turns'. It is a warming sort of thing, it is a hot drink with whiskey in it for when you realise Winter is here and you need to pull your finger out if you want to make this year count. YOU'VE GOT THREE MONTHS LEFT. SO GET ON WITH IT.

In the nearly two years that I have been doing this column, I have prayed to Dog, every night. I have knelt on the floor in my nightie with my hands tight together; I did it properly, until my knees were red. All I wanted was for someone to write a song called ‘The Man’ and for it to be ABOUT THE MAN. Sadly, now I finally have one, I am unimpressed, and I am tossing it aside like an Only One given the wrong brand of toy, a Paz Lightmonth off of the market. There's always Muse, of course. I HAVE SAID IT ONCE BUT IT BEARS REPEATING - EVERY MUSE SONG IS ABOUT THE MAN AND THAT IS WHY THEY EFFING RULE.

Poor old Esser has not exactly set the world on fire with his funny little pop career [how patronizing] and I think this is a bit of a shame, every now and then I put on ‘I Love You’ and thoroughly enjoy myself. But here he is in partnership with Mumdance (which is a GREAT BAND NAME), and together they have written quite a silly - and very grating - but very brills pop record. Which sounds like it would be perfect for double-dutching to, if only I ruddy well could. 'Forget Me Now' has Esser sounding decidedly bored, I do not think he cares if you forget him or not, but it doesn't matter because the whole endeavour is so winningly propulsive. I have decided there are not nearly enough songs to do skipping to, but this is definitely one of them.

Is this the one where he barks like a dawg? No, no it is not. Don't get all snitty with me though because 'That Day' is still very skin-prickly, it makes the hairs on the back of your neck stand on end and tingles dance down your spine ETCETERA. Basically all the good stuff. In it Conor is singing ‘Can you hear me now?’ quite a lot, he sounds rather agitated. So perhaps it is the sound check as pop song, or perhaps he is doing that experiment where you keep backing away from someone and saying 'What about now?' in order to work out how far sound travels. Or [even more childish] maybe his microphone is broken? Maybe one of the big boys stole it after C.D.T. and so now we need to buy him a new one, or a stool to stand on while he is at the counter trying to pay for it. I DON’T MEAN ANY OF THIS CONOR IS BRILLIANT, OBVIOUSLY OBVIOUSLY. I do, however, need to work out why I am so facetious about records I love and people I admire. Clearly I am the wee man in this equation, and need to stop mistaking 'being cheeky' for 'showing appreciation'.

Katy B being what she is (i.e. ALL THE CHARM IN THE WORLD) this is pretty brills, but it’s not ‘I Need Air’ because almost nothing is. In the video some naughty scamps knock down a CCTV camera, bash it in with a big stick and then the PLEECE and some very angry looking dogs come along in riot gear and it all GOES OFF. This never happens where I live, unless you count the time next door chucked a crisp packet over the fence and I had to tell Pam at the Parish Coffee Morning. I said to Pam, I said, I wouldn't mind, but I didn't even see it until I was showing the Estate Agent round and I can tell he noticed, I saw him wrinkle his nose. And we're not savages, like them lot down on the estate.

Occupying the same teary cubicle of the girls' lavs that Best Coast currently call home at both bands' collective High School prom [go with it, do], Frankie Rose & His Outs are splendid. Especially if you want to invoke a time when girls sang mournful, jangly pop songs about other girls who were better at being a girl than them. Personally, even though I like 'Candy' when it is on, in the end I feel quite arm’s length about it, I can't work out if it would just be easier to put a Pebbles comp on and have done with it. But I would never deny Frankie Rose & The Outs' fulsome appeal. Even if you threatened to challenge my boyfriend to a well dangerous motorcycle race that was started by a lady waving a red hankie, in which he might DIE.

Unfortunately The Lines will insist on using the exact kind of ANFEMICK indie drumming I cannot abide. It has huge dollops of bloodless hi-hat, so all I can hear when I listen to ‘El Matador’ is dumTISSdumTISSdumTISSdumTISSdumTISSdumTISSdumTISSdumTISS even though they use loads of other drums, because they are 'lads', it says so on the press release, which is not The Lines' fault. The other thing I can hear more faintly is another voice, it is quietly soothing. And it is saying ‘What about putting that nice lady on, the one who plays Elgar. You know, on Radio 3, in the morning?’ So I did as I was told. Mmn, Elgar. Lovely.

Badly Drawn Boy - ‘Too Many Miracles’ (One Last Fruit)

The phrase ‘return to form’ often just means ‘has been knocking about in exactly the same form for long enough that The People can now find it in themselves to be amenable again’. In any event, ‘Too Many Memories’ is delightful, and banishes my own memory of every time I saw Badly Drawn Boy play live, and he was an absolutely miserable sod. By which I mean, an absolutely miserable sod with a tea cosy on his head. I don't know why I am saying this. I like him. He is a grump though. DON'T PUT DAMON IN THE SPOTLIGHT PLEASE, HE DOESN'T LIKE IT. BUT DO BUY HIS RECORDS AND GO TO SEE HIS 'GIGS'. I DON'T KNOW WHY EVERYONE, BUT I SEE SOME SORT OF CONFLICT HERE.

R&S being James Blake’s record label home of choice and ‘Prism’ being a terrifically efficient bit of techno - even if them what know will probably call it something else, something with 'dub' in the title. It is as percussive as a roomful of secretaries clattering all at once on new Olivettis; it has some dubstep lady-warbling, and it is RIGHT GOOD. There may even be something a bit LFO about 'Prism' - which, in case you were wondering, is never a bad thing. I am going to save it for riding my bike at night - when I like to pretend I am a hoodlum out on the prowl for crack, because that shit is well moreish.

This week’s playlist is all rather warm and Autumnal, what with this, Mr. Gough and Idiot Glee. So perhaps this stands out less than it should. After all, The Bees are wick, I still think they have A Way and anyway you can tell they mean it, because in the video when they sing they look as if they are straining for a poo. What you really need The Bees, is some All Bran. [Sorry]

I’ve really tried to like this lot but it’s not going to happen. This is not the same as saying F&TH are not very good. But they are not for me.

Still Flyin’s last one - ‘Runaway Train II’ – would have been Single of the Week back in February had I a) discovered it a bit earlier and had not b) Merrill Garbus been releasing ‘Real Live Flesh’ on the same Monday (and nobody - BUT NOBODY - beats her). In any event, ‘Victory Walker 2am’ isn’t in quite the same league of marvels, but it is still very amiable moody pop with some amusing 80s stylings. But not the kind that make you want to drink bleach.

Wendy is on Twitter, here. Sometimes. Gone off it a bit. She also has a book out, which you can turn your nose up at / purchase here. Amazing.