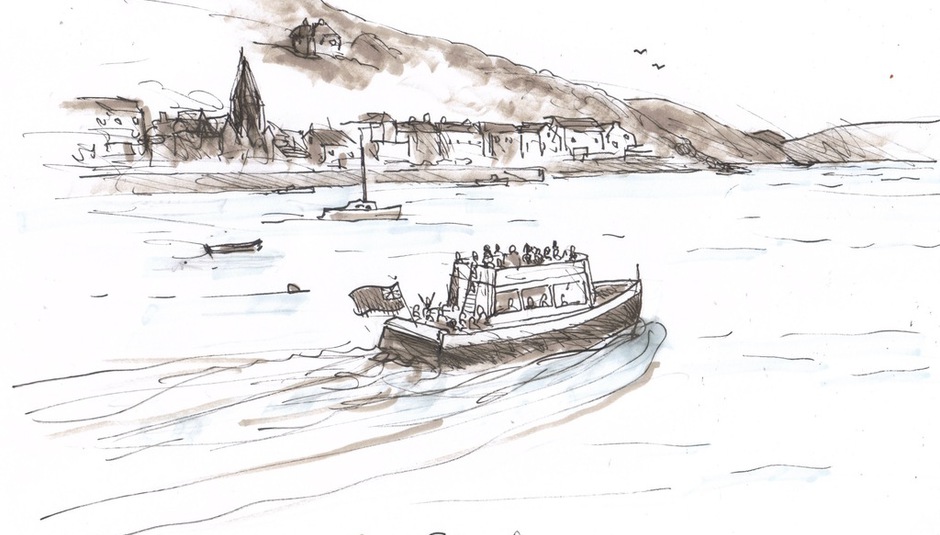 "This September, Marc and Jimi Goodwin (Doves), aka 'The Goodwin & Riley Travel Agency', helped organise a weekend trip to the Isle of Mull for a full on Scottish Wildlife Experience.

Amongst the crew was award winning cartoonist and all round good egg, Tony Husband, who documented our trip for Drowned In Sound."

Too early on Friday Morning. With foggy heads from our amateur whisky sampling session we boarded the ferry over to Mull, keeping our eyes out for whales and sea birds. There were a few cormorants and Black Guillemotts but not much else, and we arrive on Mull in no time. On arriving on Mull we headed to Tobermory for our 12.30pm whale watching trip. It was choppy out there and the boat was rocking from side to side. There were a few green people on the boat. Jimi Goodwin cracked open his bottle of Whisky to settle the stomachs. As well as Marc Riley's crew, we had a few people from our record label, and a film crew with us to document the trip.

On the boat the film crew were conducting interviews with us and the wildlife guides atop the rocking boat. Michelle, who wasn't part of the film crew, was helping out, holding the boom microphone, and an expensive sound recording device. "I work for the BBC so i know how to do all this stuff" she confidently offered.

Minutes later the boat hit a big wave, Michelle stumbled and dropped the sound recording device, it bounced off the side of the boat, and into the Atlantic Ocean. All the interviews and sound already recorded fell with it, and the chances of getting another one for the trip were very very slim. The Film crew were effectively redundant and very pissed off. Bizarrely (and fortunately), Jimi Goodwin had the exact sound recording device in his small bag which he had brought whale watching with him. Jimi saves the day. Marc Riley and Tony Husband nearly engaged in fisticuffs on the boat over their rival football teams. We didn't see any whales, and the white froth of the wave breaks made it difficult to see anything on the surface of the sea. We did manage to see Black Guillemots in their winter plumage, Gannets, more Cormorants, and watched Manx Shearwaters weaving through the waves like slalom skiers.

On the trip back to the harbour we also saw a White Talied Sea Eagle kindly perched on a rock for us.

After the Trip we headed straight over to Ann Tobar Arts Centre to get ready for the show in the 60 capacity venue. The show crept up on us quickly, and I fear we drank too much Tobermory Whisky, but it was a blast. It was the first time we had played new E.P. songs "Bear", "Can We Do It" and new L.P. track "Stunde Null" live which was rejuvenating. After the show we headed to the Mishnish pub on the harbour front for some bagpipe fun and talking rubbish.

We got thrown out about 1am where everyone mulled around laughing blind drunk. Back at the B&B, Yan unknowingly ticked the boxes for 'every' kind of egg on the breakfast menu. Scrambled, boiled, poached, fried, omelette. In the morning he was greeted with a big smile from the chef, and an outrageous Mixed Egg Platter!

We said our goodbyes and left the Goodwin & Riley Travel Agency to the rest of their wildlife weekend. The swines saw Basking Shark, Golden Eagle, Otters and a host of sea birds. Here we go, over to Eigg, and then on tour with the Manic Street Preachers. From Mull to Hull. Read Part One of the Mull Trip here

Why Did We Do That?