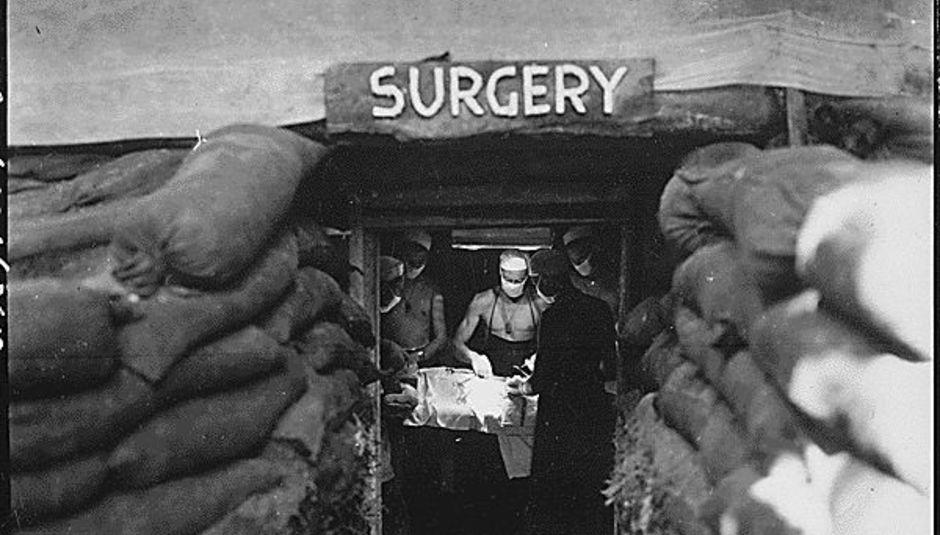 As part of DiS' 10 years celebrations, we asked some acts for a top 10 list of their choosing. Here's British Sea Power's contribution...

Phil was absolutely banjoed after the set. We all went to the Bimble Inn to recreate the sound of a train on stage. During this horrendous performance Phil thwacked Angie from the Magic Numbers in the face with his trumpet, ran through the bass rig, threw a monitor into the crowd, and smacked someone dressed as a robot round the head. In the morning his arms were black with bruises and he could only mutter the words 'sorry, sorry, I'm so sorry'.

Sometimes we let our fans dress in our 10ft Bear costume and join us on stage.
At one Newcastle show we let fan "Geordie Mark" be the Bear.
He came onstage with Newcastle Brown Ale bottles taped to its paws.
After 30 seconds he'd smashed the bottles on microphone stands and was swinging wildly with jagged edges, and the floor covered in glass.
Abi Fry, in bare feet had to leave the stage, and Yan came within an inch of a face slashing. No Injuries.

It was out first trip to the USA and we wanted to make a big impression at SXSW.
The jet lag kicked in and Noble ended up drinking 8 cans of 'rockstar' energy drink. The big cans.
Like all festivals, the changeover time was short and when we started playing the onstage sound was terrible and the nerves, energy drinks, jet lag, frustrations all combined into a horror moment, Noble threw his guitar like a spear into the audience, narrowly missing our label boss Geoff Travis, and then he climbed to the top of the bar and threw a bar stool into the audience.
We got thrown out and the police were called.
That is the first and last time any acts of violence have happened. Thankfully no one was injured.

Kevin Keegan had just become manager of Newcastle and we'd been revisiting Kev's best moments throughout the day.
Paying testament to Big Kev, Phil decided to put white tape over his black clothes, and paint his face in black and white stripes, like a Geordie Zebra.
At the end of the show, he climbed the speaker stack with a B Flat horn in his mouth and dived headfirst onto the floor.
The horn, still in his mouth, smashed his teeth and face in, and gashed a massive hole in his jaw. Out cold for a minute or 2, and in a pool of his own blood, people thought he was dead, yet they took photos with their mobile phones.
Phil received 10 stitches and some false teeth.

This was an all seated venue, so we had hired in some wireless guitar packs so we could get in amongst the crowd.
In soundcheck, Yan was thoroughly enjoying himself running up and down the stairs like he was in AC/DC.
He ran all around the place, and on his way back down to the stage, on the very final step, he fell awkwardly and landed in a heap.
His ankle ballooned to a horrific size. Tennis ball is a fair description.
He still managed to play stood up, ice pack on.

During the melee of out final song, Noble picked Yan up on his shoudlers and them tumbled over into some guitar pedals.
Yan hit his nose square onto one of the pedals and cut his nose quite badly.
He didn't realise for a while, until he saw the audiences' faces gawping at his blood red face.

The culmination of the Do You Like Rock Music? tour was a sold out show at the Camden Roundhouse. To enhance the show we brought a Raleigh 20 bicycle with us (as referenced in the song 'No Lucifer').
During the song, Phil got on the bicycle and sped across the stage playing his cornet.
He couldn't find the brakes quickly enough and flew off the end of the side of the stage onto the £16K mixing desk, and into the monitor engineer.
Nobody was injured.

This was meant to be our tribute to Ian Brown when we supported him at the Eden Project. We were banjoed and Yan was dressed like Karate Kid, and Noble was in a red baby-gro. Noble had a placard that said "Ian Brown" and Yan had a placard that said "King Monkey". You get the idea.
We foolishly went on stage and held the placards aloft. Bouncers rushed in, Yan leapt off the front of the stage, and Noble got bundled to the floor and ejected from site in a red baby-gro for 'protesting'.
After the show, Ian Brown got Hamilton and Yan in a headlock and didn't see the funny side.
Noble wandered around outside the venue alone, still dressed in a red baby-gro.
Sorry Ian, it was meant as a loving tribute, but we totally got it wrong.

We had bought some lovely grandma jumpers from a local charity shop to wear for the gig.
Pretty much as soon as the gig started Yan cracked. Lost his mind. He took his jumper off and laughed like a maniac whilst throwing his guitar down during every song.
He began insulting the audience and himself. He had only drank two beers and thinks he was spiked.
To this day he cannot bear to be reminded of this event.

Roy came on stage during one song with a metal ice bucket on his head.
We had no idea why he had come on stage, nor did we understand why he took the bucket off his head and threw it into the crowd.
It hit a girl in the face. She got a massive black eye, but Roy gave her five wishes and a free t-shirt.