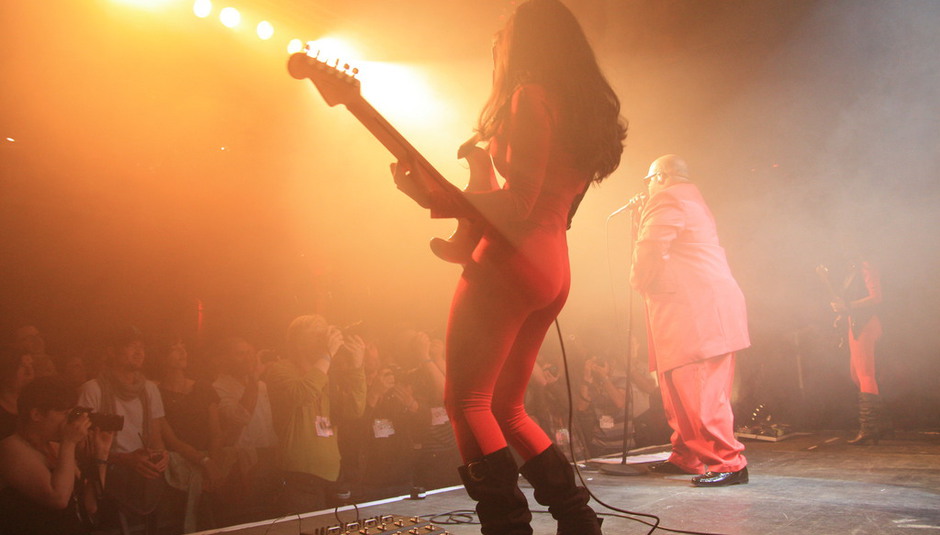 The kind of fatigue that floods your muscles, where before adrenaline was flowing freely, feels like tour limbs and stomach are loaded with ball bearings. It's also a sign that, despite your crushed physical frame, you've given your all and had the best time you could possibly have had. Reeperbahn Festival provides this in a way only SxSW and Brighton's The Great Escape can compete with. Where Hamburg reigns supreme is in its thriving creative hub versus the notorious, tourist-trapping sex industry, garish and blatant. Everywhere from the squatting art collectives at the Gängeviertel to the unfinished concert building Elbphilharmonie, tells you it's a city that expresses itself through its development in the name of the arts. Reeperbahn Festival reflects this in its eclectic platter of acts. From Blood Red Shoes to Chilly Gonzales via Wolf Parade, not to mention the swathe of European acts – Kellermensch, C-Mon and Kypski, klein, Tim Neuhaus – there's plenty to choose from across the 22 venues and three nights.

Warming up with a keynote speech by legendary music industry player Seymour Stein – and I say legendary for the sole reason that he signed Talking Heads – in the afternoon only exudes a confidence in the diverse lineup visitors are about to witness.

And so it begins. Jochen Distelmeyer's Germanic arena stampede may well provide a local flavour, but it's reduced to a bland if fairly well constructed piano-led sound. A brief glimpse of the similarly drab Olöf Arnalds demands a quick turnaround in scheduling fortunes which are, on the first evening, fragmented by time changes. Kurran and the Wolfnotes continue the onslaught of acid-laced folk which seems to drench the airwaves consistently. Although they capture some fairly light-hearted melodies, their approach refuses to turn exhilaratingly frenetic, eerie or chillingly ethereal as their countless rivals. Surprisingly reminiscent of the stark, brutal, repetitious cable-riffs of the much-missed Ikara Colt, Prinzhorn Dance School dismiss their many critics by threading spring-loaded tendons into each beat, each pulse, each scoffed vocal tone and every hit of the guitar or bass. It's a relentless performance that sparks a bout of toe tapping and appreciative, mechanical head nodding. Not thunderous, but certainly authoritative.

A day of boating harbour trips in St Pauli and an unexpected Q & A by Cee Lo Green – including an offer of shots with the man himself at the bar – is followed by a couple of songs from Canadian songwriter Dan Mangan at the Canadian Blast daytime showcase. A brilliant entertainer, his final song brings the entire band – drums, double bass, guitars – to the floor, and prompts an escalating singalong to the nonsensical couplet “Robots need love too/They want to be loved by you” but with a melody so irresistible, it's lodged in the brain before absorbing the absurdity of the line. The stunning first performance of the evening keeps the mood buoyant. The Isbells, from Belgium, have more than a mere hint of Bon Iver about them, but the shimmering pedal steel, faultless harmonies and touching sentiments more than speak for themselves. Wonderful and compelling.

Wolf Parade follow and it appears they haven't lost as much punch as Expo 86 suggested, flowing through their three album back catalogue with the expertise of a band comfortable with their own expectations. Frog Eyes, Sunset Rubdown and Handsome Furs may all be better prospects on record, but Wolf Parade are still a seductive and intense live band. James Yuill plays to a packed Moondoo club, his hefty blend of acoustic folk and hi-energy trance perfectly splicing the delicacy of a lot of the festival's other performers and the neon-savagery of the Reeperbahn strip meters from the door. Cee Lo Green's anticipated performance is full of sass, soul and undeniably sexy musicians, though falls flat on occasion due to a lack of density and subtlety to the sound. For their first live performance together though, both band and leader confidently pull off a set of almost entirely new material from forthcoming album The Ladykiller. A rousing version of 'Fuck You' is followed by an entirely bizarre choice of cover in Lou Reed's 'Perfect Day'. The band that blends Freitag into Samstag, appropriately, is Texan quartet This Will Destroy You, who are utterly beguiling in their lattice dynamics, post-rock torrents of noise and circular melodies. Finishing with 'Threads' from their second, self-titled album is a masterstroke, slamming the crescendos and piercing notes into a couple hundred heads like aural acupuncture.

A leisurely stroll around Flatstock, the gig poster and artwork convention, is a wallet-seizing enterprise. Elegant works for shows by Sunn O))), The Appleseed Cast and Dinosaur Jr are among the highlights. Fine works by talented artists for an art that still seems to survive thanks to gig-going fans looking for mementos. The final evening is stacked with must-sees – klein, Frank Turner, Féloche, Icelandic contingent of For A Minor Reflection and Hjaltalín, the exceptional Nedry, the aforementioned doomsters Kellermensch, post-hardcore outfit Captain PlanET, odd popsters The Chap, Murmansk – which are all affected by dispiriting timetable clashes. Where the first day was a much smaller bill, other acts and venues could've been added to spread the weight of the bill. Typical city festival complaints aside though, perhaps the narrow highlight of this evening is The Megaphonic Thrift, the much-hyped angular-grinding Norwegian quartet. Perhaps it's my own personal adoration of Kim, Lee, Steve and Thurston, whose spirit and – let's face it – sound flows through this outfit, but it's just as much their thrashing, sciatica-shock assault on noise rock that brings them to the forefront of this particular night. Closing the festival to the DJ skills of our very own Blood Red Shoes – 'In Bloom', 'One Armed Scissor', 'New Noise' all causing a huge group dance off complete with full-throated screaming – leads inevitably to exhausted energy reserves only punctuated by twenty minutes of hysterical, slightly-unhinged laughter before entering hotel rooms for recharging.

The eclectic venues, Molotow, Docks, Haspe Bühne and Imperial Theatre contrasting well and hosting great bands, and the superb booking choices make Reeperbahn, in its fifth year, an important part of the European festival circuit. Plan well, explore the city, investigate the unknown and make full use of your time and energy, and Reeperbahn Festival will reward you in kind.