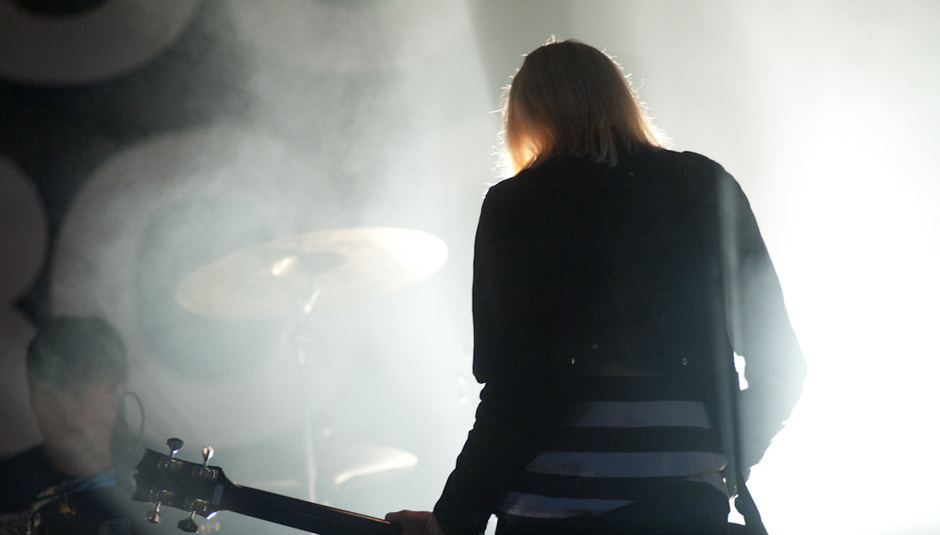 There have been some astonishing things to come out of Norway, but perhaps none as astonishing as Serena-Maneesh bassist Hilma Nikolaisen, who tonight – and presumably at every show – appears to stand at about seven feet tall, at a conservative estimate, and slides around aimlessly and effortlessly from the front of the stage to the back, from one side to the other as though loosely attached to a set of infinite rails. I may have mentioned this before, but it is genuinely mesmerising.

Meanwhile her brother and S-M main man Emil does his thing with six-strings and voice whilst cloaked and with occasional bandana. There exists not quite a sibling rivarly between the two, but certainly a contrasting approach, as his antics at various points stretch, but are not limited to, wrapping the microphone in a veil, beating said microphone a number of times and plenty of guitar swinging which would strangle a far less talented and practiced man.

But it is not like these things are all that interesting when you consider the actual music, they just add to the total. A cursory glance at Wikipedia, as every good journalist should do, and there is talk in an interview about circuses and the “small subtle elements that make the stage presence much more powerful” and it's hard not to think that is the case here. They are, after all, a band who care so much about detail and doing the right thing that they started recording their second album in a studio before scrapping that idea to then to record it in a cave. The same thought applies to the three members who pepper the edges of the stage and add their equally important parts - whether it's the jangling of intermittent chimes in the periphery or the rigid heartbeat and never-wavering drumming which is punctual, persistent but not overbearing – just as it should be.

It is mostly unclear what is being sung, or what message is conveyed. I am sure there is one in there somewhere and I'm told all of those tattoos mean something but again, it doesn't seem to be of particular importance. The message is found in the meat, and there's plenty of that in Serena-Maneesh's weighty, pounding, all-engulfing musical manifestations. Here it's of the consistency where you feel it in your throat as well as your gut, but maybe that's just the journey the music takes as it thickens the air.

The overall unity makes it difficult to single out sections, but the lead-up to 'Ayisha Abyss' is exciting, primarly because it's clear what is to come; a seven-and-a-bit-minute long, although probably more, display of heart-pumping, deep-breathing, slithering sonic infusions. It is not that much more on record, or rather it feels a poorer version of itself, which is in part down to the fact that, when experienced at close proximity, it threatens to slow-bore holes and burrow its way into your darkest recesses, or at the very least soundtrack a similarly dastardly act. It's not all layers and layers of the deliberately dense, though, as a couple of “ballads” are introduced. They still drip heavily with a white noise and richness, but at a languid, more measured pace.

Certainly, it's a shame that there aren't a few more souls to witness this, but there are enough. The completeness and intensity means that looking around to count the heads isn't top of the list of priorities, more is to bathe in the sound that the two LPs have dealt us. By the time the guitar eventually is thrown finally to the floor after a 10-minute plus ending assault, bolting from here is the only option. I do not want to so much as sniff an encore. It'd spoil the moment.