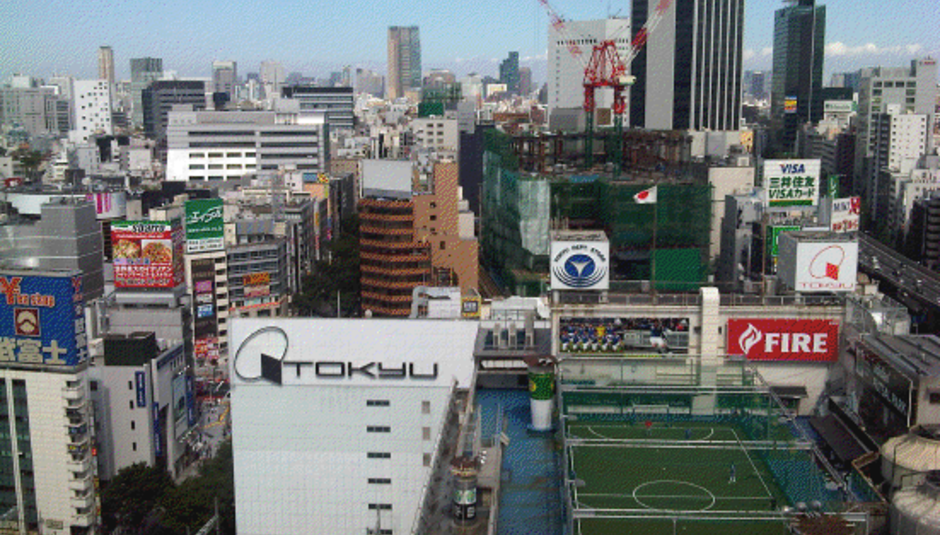 To celebrate the release of their most excellent debut album, Michael from Everything Everything has compiled a tour diary for us, documenting the band's adventures this August at Summersonic Festival in Tokyo...

Guy, our tour manager, has been to Japan many times with many bands and has hinted that he knows The Secret; how to beat jet-lag when you're only there for a few days, which is exactly the mission that lay ahead of us. After the obligatory drive from Manchester to London in the van (M6 4 EVA) we arrive at the Travelodge at King's Cross and head out to a near-by pub, huddle our heads close to Guy and wait for The Secret.

"Just stay up late drinking”, so we start as we mean to go on. I decided the Moscow Mule will be my drink of the trip as I have recently been getting into Ginger Beer.

I have my own secret - eight of my Grandma's sleeping tablets - so the flight to Japan was a breeze. Don't worry, I shared them out amongst my comrades but some did have to make do with Nytol, which my Grandma eats for breakfast. I started watching Bad Lieutenant, directed by Werner Herzog and starring Nicholas Cage. We in Everything Everything have been keeping an eye on Cage's hair over the years (See: Shanghai Noon and Next) and normally it keeps us fascinated for a couple of hours while he does his acting. Alex and I both independently chose Bad Lieutenant from the entertainment system due to the Herzog connection but neither of us could endure it.

We land in Tokyo and are soon very efficiently whisked to our hotel where we are greeted by autograph hunters who politely ask if we are The Drums. We say yes and happily sign their scraps of paper. We are due to play Summersonic Festival the next day and, as with all festivals, so are loads of other bands. We later see past tour-mate Darwin Deez and his band in our hotel lobby, plus Peter Hook, but we always seem to see Peter Hook everywhere we go.

That night we played an acoustic show at a club in Tokyo but we didn’t go on until 1.30am (God knows what time that was in the UK) so many free cocktails were had, although the impressive list of cocktails all seemed to just be made from different ratios of vodka and lemonade. Never mind, we had a nice time while Alex and Duncan, our manager, entertained the crowd with their DJ set.

Duncan and Alex at the helm

In Japan people can sleep through Deerhoof at 120Db.

At last we drunkenly mauled our songs before being told by our Japanese label to go home and get some sleep in preparation for the big day.

We woke up on Saturday feeling fucking weird. Soon after we found ourselves at the Summersonic site, which is basically a really nice, clean urban festival with arenas and some tents. There seemed to be quite a lot of Japanese bands playing Sum-41-style-pop-punk in our tent but the crowd was going nuts for it so can’t really argue with that. Once we’d got our bearings it was time to eat.

The dressing rooms and catering and a couple of stages were all contained in one massive arena, much bigger than any in Britain. If you’ve seen the film Anvil - where they play their triumphant gig in Japan at the end – then you know how huge one of the stages is in that arena. Catering backstage is always a strange sight at festivals because you see all these massively famous people getting their lunch, dutifully waiting in line with a tray as if it’s some kind of school dinner. At Summersonic Frank Black from the Pixies was looking for a bread roll and Courtney Love was directly behind me in the queue for barbequed Japanese beef while the lads from Dream Theatre milled around looking fucking ridiculous.

Anyway, our actual show was great fun and we were over the moon with the reaction from the crowd, since – apart from the previous night’s effort – that was our first gig in Japan so we didn’t know what to expect at all. Once all the gear was packed up we only had an hour to check out the festival so we went to see Taylor Swift at the baseball stadium across the road from our tent. She did a couple of songs about “boys and love” but we soon left her to it, not convinced that she knew about either of those things very well at all, and wandered back to our tent to catch the end of Blood Red Shoes’ set.

After we got back from to our hotel we set out to sample Tokyo at night and ended up in a tiny place called Punk Rock Bar where we seemed to piss off the barman by ordering drinks. His specialty was pouring half pints of warm flat lager badly but they were only £5, which in Tokyo is cheap… Later Guy paid £12 for a small pizza that had potato wedges and Thousand Island salad dressing on it. We all retired to bed at about 4am, still wide-awake.

On Sunday we went shopping. Rubik’s cubes of all designs, USB-powered dogs that shag your computer and face straps that are meant to make your face smaller were all on offer but in the end we plumped for banana headphones (Jon) and a rubber horse’s head (Alex) and were pleased with our purchases.

We had a gig with Band of Skulls and Blood Red Shoes that night so wandered around the venue hung-over eating cheese toasties and bumped into a few enthusiastic Japanese folks outside, all yielding cameras but it was a nice surprise. Gig was great - extremely respectful and appreciative audience. We enjoyed watching Band of Skulls and Blood Red Shoes play while chatting to some really lovely locals before eating Korean Barbeque, which we cooked ourselves on our tables. After dinner things are less clear but karaoke definitely featured and sleep definitely didn’t.

Tokyo, we’ll be back soon.