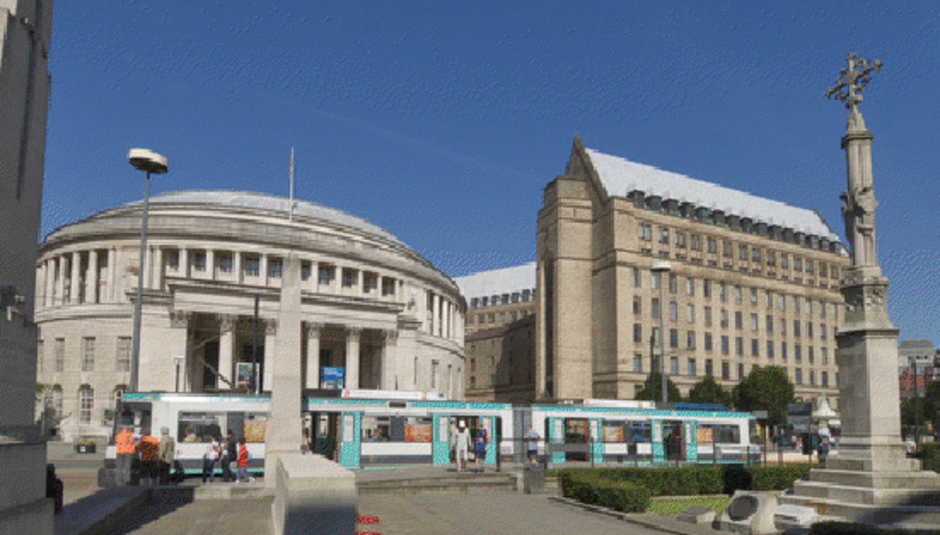 Jeremy from Everything Everything wrote us a few words about his favourite places in Manchester... We'll start here because we did. We played our first gig here. Every band of the last two decades you can name has been through here at some point. Night and Day set a new precedent for the city's venues and bookings over 15 years ago when it was opened by a mad Dutchman. I've seen some wonderful gigs here. It still has the same battered charm that I imagine it had on its opening night. We, weirdly, ended up playing our 99th and 100th gigs here too. It was the first place I came to when I moved, wide-eyed, to Manchester some years ago and I was instantly able to sense the city's more recent post-Factory musical heritage. I love the very smell of the place. When Elbow's career was first just taking off, Guy Garvey used this place as his office, sat continually at the bar on their landline cos he didn't have a phone at home.

You could be forgiven for thinking that this is just a tram stop with a war memorial next to it, and it is. But what the memorial originally commemorated was a rare and, I think, relatively recent home soil atrocity known as the Peterloo Massacre. Bascially, a huge crowd of tens of thousands of demonstrators, lobbying for political reform, were charged upon by Cavalry that had just returned from the Battle of Waterloo (hence the massacre's ironic title). Seventeen people were killed and between 400 and 700 were injured by their sabres. Horrified but galvanised, the city's population then gave birth to suffrage, The Guardian newspaper, and further-stoked the socialist workers' cause.

This kind of gloriously bloody-minded social and political radicalism in the face of duress and adversity has really given the city its enduring identity. It makes me proud. There has never been a Conservative councillor elected in Manchester.

I have to mention this place, it’s like a disreputable old friend that you love to bitch about but you're more fond of than you realise. This is basically the Arts Department of Salford University. Jonathan and I first met whilst studying music here. It's an old textiles factory in one of the run-down areas that typify Salford. It's massive and absolutely knackered flagship. The plumbing is almost entirely exposed and sticking out all over the corridors. Loads of bands have come out of here; Gomez, Oceansize, Delphic, Hurts, us (partly), bits Elbow and Doves, Johnny Marr gives the occasional lecture. Ever since we arrived here there's been talk of moving the entire department over the road to a brand new building on what is currently a wasteland with an occasional population of travellers and grafitti that says 'Madchester'. Sadly, due to our new Coalition powers that be, this will probably never happen. This has, in only 18 odd months, become Manchester's best venue and bar and everything. It used to be a school for the deaf in the city's Victorian industrial pomp and the owners (who also own the handful of 'Trof' bars) have kept the original redbrick facade at the front of the building, and the raked lecture-theatre style seating at the back on the large live room upstairs. We all saw Wild Beasts here a while ago and were completely agog. We also recently DJed Airship's single launch, alongside our mate Brometer, directly after a show at the Ritz up the road with Delphic. It was the culmination of 5 weeks of solid touring. Everyone was in a state best described as COMPLETELY FUCKED and I had one of the best nights of my life. Lovely.

The Art of Tea, Didsbury When I first moved in with the rest of EE I wandered round the corner into this cafe that had just opened up and asked for a job. Then I went back every single day and badgered them until they gave me a job. At that stage there was a record shop and a bookshop and picture framer's (these two remain) all operating under the same roof. It was a lovely place to work. The couple that run it never made a fuss about me taking time off to tour. There are gigs in the evenings and continuing art and photography exhibitions. You can get the best breakfast in the Suburbs here. Having eaten it almost every day for a year and half, I can recommend the sausage and cheese bagel, and the coffee and booze is all great too. When I come in here I miss working 'normal' jobs.