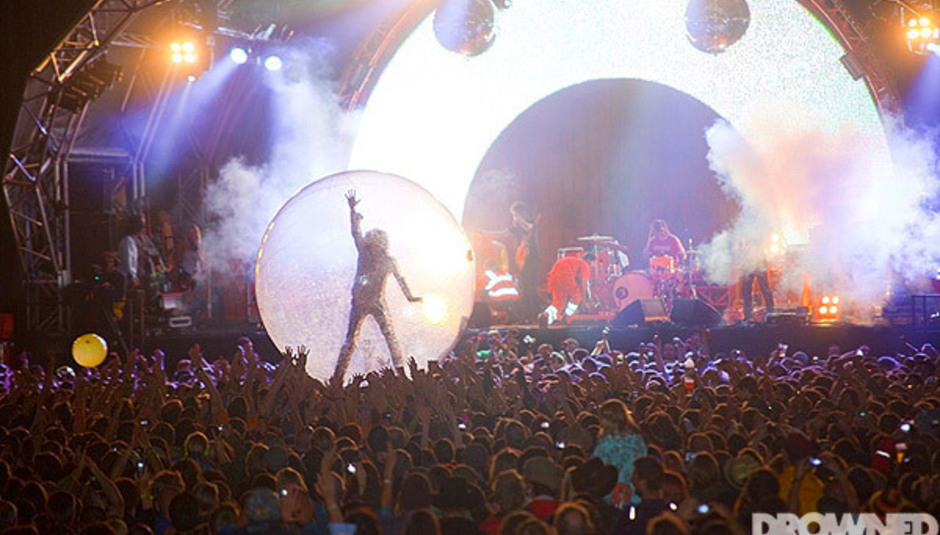 You’ll already know by now that Green Man was pretty darn wet this year, so let’s not mention that too much. Or the fact DiS’s tent was unable to withstand the deluge. Despite the inclement conditions, the music was really good - at times, great - and the atmosphere was incredibly relaxed. That’s all you want from a festival, really. Of course, the naysayers say it’s too sedate and middle class (go to Leeds Festival, then), and that the lineup this year played it too safe (because of Mumford & Sons and Doves? Don’t watch them, then) but, frankly, they probably didn’t lose their minds at Factory Floor on the Saturday night. We did, and thus we win.

In the beginning, though, was a band from Sheffield. The Big Eyes Family Players opened proceedings in the Cinema Tent, their swooning instrumental folk set perfectly against a backdrop of surrealist (and some just plain surreal) images. Later in the day, a trip to the Main Stage in search of Mountain Man proved fruitless – their set was postponed, and moved to the Green Man Pub. Apparently they didn’t have the cash to pay the Severn Bridge toll, so were running rather late. Sweet Baboo played instead, but we don’t talk about that. When MM eventually surface, the Vermont trio are bloody lovely, and well worth the wait. Unimpressed by Beirut’s lazy rendition of ‘Nantes’ come headliner time, we head over to Fuck Buttons - smart move. The noise duo don’t disappoint – from Tarot Sport opener 'Surf Solar' onwards, they absolutely slay the Far Out tent. By the end, it's little more than a seething mass of shapes, sweating and stomping. We take our own advice and give Doves a miss, heading back to Far Out for late night A/V thrills from DJ Food and DJ Yoda, both of whom are on true party-starting form. Saturday starts with a bang. Islet’s explosive set isn’t bettered all weekend, and even at the ludicrously early time of 12.30pm, after an uncomfortable night spent in the Yaris (yup, wet tent blues), they delight all of our senses. Except for smell; we aren’t close enough to sniff any ‘pits. Still, the percussive onslaught of ‘We Shall Visit’ is unbelievable - like the first time you heard Liars and went ‘What the fuck?’. The rest of the afternoon is ups and downs. Ups: Race Horses (SFA + Supergrass = perky pop delights), The Besnard Lakes (‘Disaster’ is just perfect, and they’re a far better live band now than when they broke in 2007), First Aid Kit (even mid-set sore throat issues can’t hamper their understatedly beautiful take on harmony-driven folk) and These New Puritans (‘We Want War’ – we got it). Downs: Egyptian Hip Hop (lots of hype, painfully short on tunes) and Avi Buffalo (missing their keyboard player, and it showed). Later on? For some of us, it was all about The Flaming Lips - whose increasing tendency to favour rambling psych-outs over actual songs created an almost perfect 50/50 split between rapturous and bemused audience responses - but the rest had Factory Floor to provide the perfect bookend to a day that started on a manic high, and ended somewhere close to Beelzebub. Lone Wolf serves up a version of Scott Walker’s ‘The Old Man’s Back Again’ for Sunday lunch. It’s tasty, and his own mini-masterpiece ‘Keep Your Eyes On The Road’ isn’t far behind, either. Like a good Yorkshire pudding complementing a prime cut of beef, perhaps. Continuing an afternoon of animal-inspired band name madness (Message to Bears, Je Suis Animal and Megafaun all feature – bet they had fun putting that run together), Brooklyn’s Bear In Heaven sound kind of flat by comparison. Theirs is a good record, but live, today, it’s missing some oomph. No such problem for Silver Columns (aka Adem and The Pictish Trail), who bounce around the Green Man Pub like a pair of geeky teenagers given their first Red Bull. At one point, the former bangs his floor tom from in the middle of the crowd, and we howl along in unison like it’s the most natural thing in the world. Elsewhere, Efterklang’s life-affirming headline slot on the Far Out Stage provides a very definite high spot of the weekend while, on the Main, a hushed reverence in preparation for what feels like the most anticipated set of the weekend. Joanna Newsom, complete with mini-orchestra, opens on '81' and for the next hour-and-a-half weaves her way delicately through much of recent opus Have One On Me. It's old favourite 'Inflammatory Writ' that feels most magical, however. And then? What else? Rain falls, the Green Man effigy burns, we troop back to our hiding places – it’ll be just the same next year, but that’s more than fine with us.