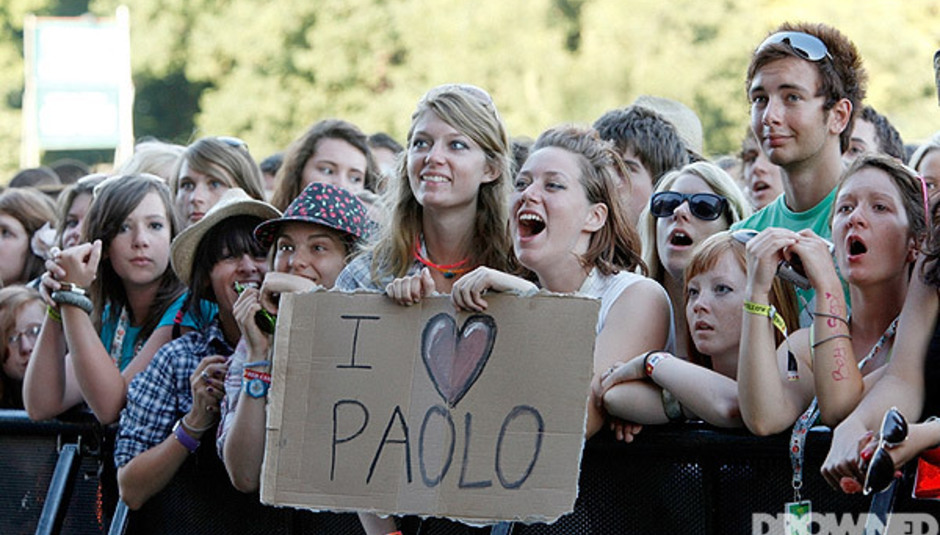 While those of a more discerning taste will no doubt find themselves at Green Man this weekend (previewed here), let's not forget that 180,000 punters will be at another event spread across two separate sites over the course of the same weekend.

The much maligned corporately sponsored V Festival opens its doors tomorrow (Friday 20th) at Hylands Park, Chelmsford and Weston Park, Stafford. The event sold out long before the majority of its artists were even announced, so if you got tickets, this preview is for you.

Of course the line-up is always going to be a bone of contention, particularly for those of us used to the more subservient delights of ATP, Primavera or Latitude. While the main stage and its radio-friendly likes of Kasabian, Kings Of Leon, Paul Weller and the Stereophonics are unlikely to conjure up anything more than a "meh" chorus in these parts, it is worth noting that across the festival's many stages lie several gems worth checking out. Those wonderful people at we7 have put together an extensive playlist of artists they think you should be checking out, and bar one or two obvious exceptions, who are we to argue.

In the meantime, whisper it quietly but DiS had an absolute whale of a time at last year's event reviewed here, and here shall giveth unto you a sneak preview of the 10 artists we recommend you should be checking out at this year's V Festival.

(Virgin Media Union Stage - Stafford Saturday, Chelmsford Sunday)
Fresh off the back of their show-stopping performances at this year's Summer Sundae (on the DiS stage, no less!) and Latitude, the Selkirk five-piece's most successful year to date reaches a pinnacle with undoubtedly their biggest UK festival appearance to date. Quite what the average V Festival goer will make of songs like 'Keep Yourself Warm' and 'My Backwards Walk' is anyone's guess, but we predict this could be the event that catapults them fully into mainstream consciousness. Oh, and, PS, if you check the site next week, we'll have a "review" of V by their frontman Scott Hutchison.

(4 Music Stage - Stafford Saturday, Chelmsford Sunday)
Doves may have been creating music in one guise or another for a good quarter of a century now but many would argue that their most recent album, last year's Kingdom Of Rust, may just have been their best one yet. Squeezed in between the High Street dancefloor 'delights' of Calvin Harris and The Prodigy, it's difficult to imagine what kind of set messrs Goodwin and Williams x 2 will conjure up from their extensive back catalogue.

(4 Music Stage - Stafford Saturday, Chelmsford Sunday)
Mark "E" Everett and his ever-changing cast of Eels, may have first come to prominence back in the mid-1990s with Beautiful Freak, but his creative spark still burns as brightly as ever. Having released three albums in the past twelve months - really - expect a healthy dose of new material from the recent End Times and Tomorrow Morning long players as well as a smattering of classics such as the one in the video below...

(Strongbow Arena - Chelmsford Saturday only)
London trio Is Tropical may have only been around for a year in their current guise, but that hasn't stopped them making waves in many of the right places. Their punk/funk/math/electro hybrid may cause the genre librarians multiple headaches but the pristine pop of 'When O When' and adrenaline rush that is 'Seasick Mutiny' are sure to send pulses racing this weekend. Although sadly not in Stafford, alas.

(Virgin Media Union Stage - Stafford Saturday, Chelmsford Sunday)
In what is a rare UK appearance, let alone stage headlining slot, the exquisite purveyors of futuristic ambient pop better known as Nicolas Godin and Jean-Benoit Dunckel are surely worth an hour of your time, particularly as they will be going head to head with atrocities like Kasabian. Now with nine albums behind them - although many still argue they've never bettered debut Moon Safari - expect a show packed with sonic and visual delights. Welcome back!

(Virgin Media Union Stage - Chelmsford Saturday, Stafford Sunday)
Since making his name on the first Massive Attack album back in 1991, Tricky has embarked on many ventures. Be it music or film, he is renowned for producing some of the most stark and haunting musical pieces of his/our generation. If Maxinquaye and Pre-Millennium Tension cemented his aura from the outset, new long player Mixed Race should determine he's a force to be reckoned with nearly twenty years after his contributions to the seminal Blue Lines. Not to be missed.

(Nissan Juke Arena - Stafford Saturday, Chelmsford Sunday)
Although something of a marmite character to both critics and punters alike, we at DiS have something of a soft spot for Ms Nash, culminating in her current album My Best Friend Is You being nominated for one of DiS' 2010 Neptune Awards. Now with an added riot-grrrl bite to go with her previous man-baiting bark, her late afternoon slot is one of this year's most confounding, must-see moments at V.

(Strongbow Arena - Chelmsford Saturday, Stafford Sunday)
Although still in their early-doors stages as far as releases go, dance-infused four-piece Fenech-Soler offer an eclectic mix of sounds and styles incorporating anything from house to glam rock that'll keep anyone in their presence playing a simple guessing game of what genre they're going to plunder next. They're also one of the most energetically radiant post-comedown acts DiS has seen this year, as anyone at either of their flamboyant Great Escape shows in May attest.

(Virgin Media Union Stage - Chelmsford Saturday, Stafford, Sunday)
Quite what an ex-member of Queens Of The Stone Age and legendary frontman of Sub Pop staples Screaming Trees is doing here, only he and the organisers can answer, but one thing's for sure, his presence along with the other nine artists DiS recommends will certainly lift this year's V out of its Radio One induced quagmire. Last heard contributing to UNKLE's Where Did The Night Fall album, its hard to imagine which parts of his checkered career Lanegan will draw his set from but we'll be waiting with baited breath.

(Virgin Media Union Stage - Chelmsford Saturday, Stafford Sunday)
Veterans of the original Manchester-based baggy movement they may be, but unlike many of their contemporaries from that era, Tim Burgess and co. didn't choose to go into a drug-induced slumber. Instead, they've continued to make records and despite the odd lull here and there, have consistently produced the goods when it mattered. Having seen them wow the crowd at last year's Summer Sundae, one thing apparent about a Charlatans set is not realising just how many of their songs you actually know. Prepare to sing along...

---
For more information on this year's V Festival visit the official site for a full run down of who's playing where and when.