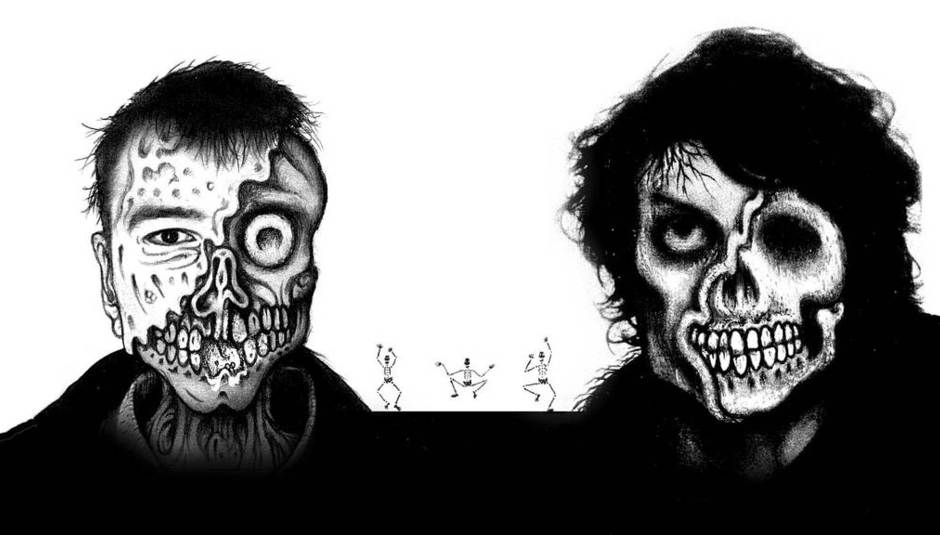 Part of the brief for our tenth birthday celebrations was to cast a critical eye back over Drowned In Sound’s decade-long existence and draw out strands we felt had been overlooked, artists we felt were under appreciated or hadn’t been given due column inches on this here site. As part of this week in particular, it seemed ideal to cover something that had already lived out its entire lifespan, and had said all it ever intended to say.

Skull Disco was dead from the very outset. Everything about Sam Shackleton and Laurie Appleblim’s label seemed like a communication from beyond a void from which it was impossible to return – Zeke Clough’s dessicated artwork, which raised spectres of ancient civilisation and prehistoric rituals, the dry, claustrophobic clank of the music itself, even the track titles: ‘Tomb’, ‘Hypno Angel’, ‘Blood On My Hands’. There was a modern sort of necromancy at work, and it culminated in the most perfectly realised project yet to have emerged from the scene surrounding dubstep. Ten releases, each one essential, perfectly self-contained. Two years after its inevitable demise its influence is felt more strongly than ever, so as part of DiS’ tenth birthday celebrations it seems a perfect opportunity to cast an eye over a label that deserves far wider recognition outside the small circles it was nurtured in.

Even by the time of UK garage’s death and reanimation into new, wraithlike forms, the two-step beat was rave stripped of excess fat, unnecessary components simply peeled away to leave – seemingly – the fewest elements required to make bodies move. Perhaps that’s why the resurgence of the garage beat in dubstep’s progeny a few years later was able to provoke such gut-wrenching nostalgia: by the time mass crowds began to gather around UKG in the late nineties, the genre was already a svelte, sultry shadow of the maximalist optimism that came before. Perhaps those minute snags and pauses that appeared between swung kicks, hi-hats and snares left enough space for the mind to fill in the gaps with shared memories. When the earliest dubstep practitioners further stripped away the final layers of muscle, sinew and tendon from its wiry frame, they left behind a skeleton. In keeping with their newly minted concept, Shackleton and Appleblim exhumed the dusty remains of their ancestors so they too could join the party.

In the early days it was all darkened warehouse events and beats that slashed through eardrums like glass. Shackleton’s early non-Skull Disco output – the kick 'n' scream grime of 'Stalker'; the pseudo-ritualistic chaos of ‘New Dawn’ – was infused with a Ballardian sense of society eating itself alive under the pressure of external forces. And despite everything written about Shackleton as a supposed 'dubstep' producer, then as now he found far more common ground with the more esoteric regions of post-punk and experimental music; Throbbing Gristle, Neubauten, Faust, PiL, This Heat, Muslimgauze. It was taut and abrasive, driven by a lopsided sense of funk and, crucially, possessed a wicked sense of humour.

The hook up with Appleblim for SKULL01 saw the start of a remarkably focused project; the first seven releases on the label, gathered together on the Soundboy Punishments compilation, were all sand and grit. Clough’s iconic artwork established an aesthetic that fit perfectly; both the record sleeves and the music contained within resounded with the brittle cloc of bone hitting bone. Appleblim’s tracks were more overtly tied to the dark swing that gave rise to FWD>> and DMZ – ‘Mystikal Warrior’ lurched like early Mystikz, appropriately – but even by this point Shackleton’s tracks were finely honed into something distinctly 'other'. And sidestepping the word's Orientalist context, he managed to tap into something grounded and empathetic rather than distant or voyeuristic. The political and social sentiments of ‘Hamas Rule’ and ‘Blood On My Hands’ were heartfelt, though cloaked in ambiguity, and the latter’s elegiac musings on the fall of the Twin Towers still stand as a beautiful, hymnal acceptance of mortality. By the time Ricardo Villalobos teased it apart into a strung out, decaying eighteen minute epic, there were signs that techno’s forward motion was beginning to seep into the Skull Disco sound.

By the time of the label’s final few releases, even the music was beginning to break apart under its own weight. Appleblim’s gorgeous ‘Vansan’ peeled away layers of sharpened synth to reveal a minimalist chassis beneath. Along with the frosty beauty of his Peverelist collaboration ‘Over Here’, it marked his first foray into the tough, Detroit-influenced territories he currently inhabits. Shackleton’s music, on the other hand, seemed to have become infected with some kind of rare wasting disease. Gradually, between the voodoo whirlwinds of ‘Death Is Not Final’ and the crushed static of the tenth and final Skull Disco 12”, each element had degraded to leave little but memory, ash and the odd disembodied whisper. What had begun as bare bones had finally crumbled to dust, and it made perfect sense for the label to end where it did – it seemed there was little more that could be said. Gathered along with ghostly reinterpretations from T++, Badawi and Peverelist on the Soundboy's Gravestone Gets Desecrated By Vandals compilation, these tracks form a sepulchral counterpart to the first CD's (comparative) vitality.

A couple of years down the line and it’s difficult to overstate how perfectly the label's releases fit together: they form a body of work that’s by turns funny, sad, terrifying and irresistibly danceable. While the new directions taken by everyone involved have assumed a higher production sheen, the Skull Disco catalogue remains so compelling to return to due to its tangible reality beyond getting messed up and dancing 'til the early hours. It’d be nice to think that in several years’ time, when the current meaning of 'dubstep' has mutated beyond all recognition, Skull Disco will be seen as entirely separate from the scene that first nurtured it.

Cut it and play it loud: Dubstep reco...