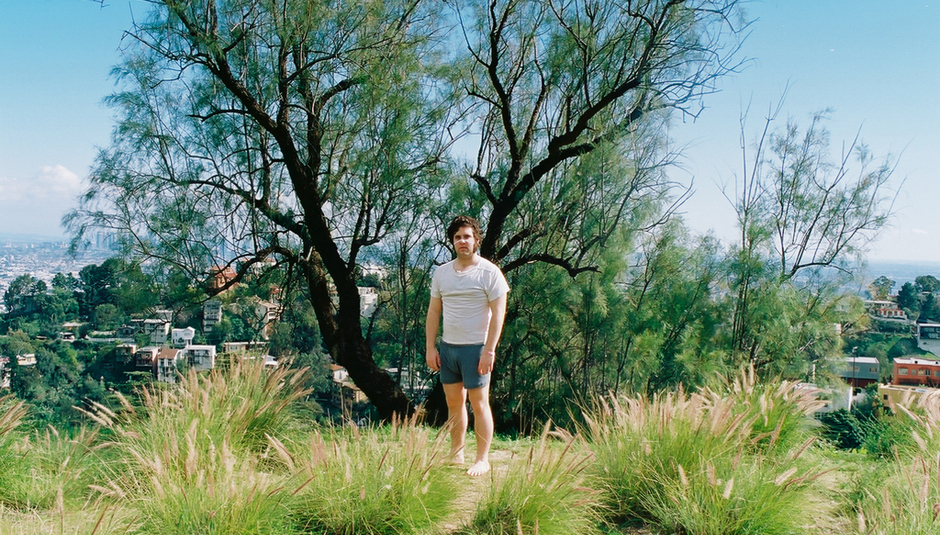 Baths is the latest electronic music project of Will Wiesenfeld, an LA musician who this month released his debut album Cerulean. The record’s eclectic mix of styles and ideas saw it garner a good deal of critical acclaim upon release, including the 8/10 review on this very website.

Although Wiesenfeld is no stranger to releasing records, his first album under the name Baths has thrusted the beatmaker into the critical eye. We had a chat with Will last week, discussing his hometown of Los Angeles, electronic music and the ins and outs of his remarkable new album.

As somebody living and making music in Los Angeles, What do you make of all the exciting music currently coming out of the city’s beats scene?

LA is such an open musical environment, the people who live there are receptive to so many different things. Not just within the beats scene, but there are so many sub-genres of music happening in Los Angeles. Like, you can go to any type of show any time you want. Especially within electronic music there are so many different types of musicians, even in the beats scene, from producer to producer everyone has their own unique style. You only get popular if you’re yourself and if you make very individual music.

With so many different ideas bouncing around LA, Baths’ sound can be difficult to place. Where would you place yourself in that scene?

I’m not even really sure. It’s definitely electronic, I think about music making from an electronic standpoint. But also I’m very instrumental, I come from a songwriting background. When people who are not very musical people ask me about it, I say its electronic music from a songwriting perspective. That’s the basis that I have in my head, but I think it’s flattering that it’s difficult to classify.

So you think about music electronically, but you often cite more traditional songwriters as your biggest influences...

Well when I say electronic, I just mean that’s the medium I work within. I play piano and was classically trained, so every song I write starts with an instrumental segment or melodic idea. It’s when it comes to actually recording and putting a song together that I’m in front of a computer. It’s like that’s the canvas, and that’s how I make everything work by putting all the ideas out there and mixing them around. So, it’s just my method of composition that is entirely electronic.

Moving on to your record Cerulean, how did you end up putting it out on Anticon?

I met Shaun from Anticon through a mutual friend, but before I had even pushed the record into his hands it was kind of making the rounds. After the show ‘Destroy LA’ last September I changed my focus and really worked towards making an album that was beat orientated, poppy and accessible. I finished it around last November and gave it too Alfred Darlington, or Daedelus, and some other people. He showed it to a lot of other people and that’s how it eventually made its way into Shaun’s hands.

Is that a label you’ve always admired?

Yes definitely. I’ve always loved Why? And I’m a big fan of Son Lux and everything. There’s so many different labels that I have so much respect for, but it was really cool to hear from Anticon and to hear their interest in it.

It’s weird, I still think of Anticon as a leftfield hip hop label but more recently they’ve released so many different sounding records...

Yeah that’s the thing, I was nervous about being tagged as a straight-edge hip hop act or something like that. Like every artist on Anticon, I think they have so many broad influences and sounds than just being simply hip hop, and that’s what was so great about the prospect of releasing with them. Having acts like Son Lux or Tobacco where the music is so otherworldly, but just at the roots is electronic music. It’s sort of a mildly unclassifiable label and that idea was very cool to me.

I suppose one of the best things about hip hop is that it can be so expansive to include any genre or sound...

Yeah, exactly. That’s my thing with electronic music, I feel like it’s the most absolutely versatile genre. If you’re creating music in other genres there’s always restrictions and experimentation can be stunted. Whereas In electronic music, the stranger sounds that you can find, or the further you can go with something, the more it’s encouraged and accepted. That’s the core of what I want to do with music, to create something that’s very adventurous and all over the place.

There are a lot of interesting little sounds in Cerulean, did you use many field recordings or unorthodox instruments to record those?

Yeah, well, all the music on the album is 100% mine. I didn’t outsource any melodic material or drum beats. I have some drum samples, but the beats and construction is all mine. The clips of people talking and stuff like that are from Youtube, and bits that I can find on the internet. Then there’s the song ‘Rain Smell’ where I recorded the sound of the rain and the birds and stuff from right outside my bedroom window.

There are a few vocal samples on the record, it can be quite difficult to use voice clips without sounding corny but I think you managed it. Given that risk though, why did you feel they were important?

(laughs) Well the whole idea of the record to me is that it’s very light-hearted. Even though it deals with some quite intense feelings in certain songs, it’s pulled through a very spirited and light hearted lense. Songs like ‘Aminals’ and ‘Maximalist’, I threw in the samples to add to that vibe of ridiculousness and weirdness. ‘Aminals’ is an especially goofy and childish song, which is why I gave it that title.

What would you say is the overall tone of the record? Because there are those happy songs but also darker elements in songs like ‘Plea’.

I want to say positive. Because even though it deals with those sort of things, it’s in a reflective, reminiscent manner. It’s not dwelling on them and making them seem something more than they are, but quite matter of factly dealing with them. Like, the song ‘Indoorsy’ is a lonely song lyrically, but it’s just sort of telling it how it is. I don’t know, I say positivity not to mean that everything is coated with this super positive manner. Like with everything, in all humanity, there are dark moments and more depressing things, but as a person I am optimistic and that’s how I wanted the album to feel. Even the last song on the album, which is quite deeply sad I guess, it’s sort of bittersweet. The last line, “smile for me if you can, I want to have that in my head”, even though it’s a sad situation it’s ending on a positive note. That’s how I try to deal with everything in life. Like, what is it? Making lemonade out of lemons? I don’t know if that’s even an expression (laughs).

Could you explain the theme of water on the record that comes through the album artwork and, of course, the name ‘Baths’?

Yeah, sure. I have weird little obsessions, and water is a big thing for me. It’s a goofy indulgence of mine to talk with people about what element they feel closest to, because I think about that all the time. I’ve always seen myself as a very water orientated person. I knew the title of the album, Cerulean, very early on, and Baths came from the idea of taking a bath and retreating into my own head. I don’t know, thematically water keeps coming up and makes sense to me somehow.

Well the album seems to have been very warmly received, what do you make of the press it’s received? Do you read it?

It’s strange, all of this is brand new to me. I’ve been making music for a long time, but any kind of version of success is completely, completely new to me. I’m getting very excited, but trying not to let anything phase me. I’m reading reviews, but I’m trying to stay very level headed. But, of course, when I read a good review I’m super giddy about it.

With the record just being released, I suppose you’ll be touring for the foreseeable future?

Yeah, I think that’s the plan. We just talked about all this recently, and I think the way it’s going to work is that I’m going to be touring and supporting the album all the way through until April or May of next year. Just a lot of shows, and then after I can step back from that and concentrate solely on making the next record. I already have a few songs which are very different to this one. Like the way this album is extremely positive, I feel like this next album could potentially be a much darker and creepier sort of album. But I need that time to step back from this album first, I feel creatively very dry right now and If I was to rush in and make another record it would probably be a piece of shit. I never want to make the same album twice, because making a record is the ultimate artistic expression for me. To repeat the same thing would be so depressing.

Absolutely. Will you be coming over to the UK at any point?

Yeah I think so, hang on one moment. (asks manager). Right yeah, well apparently I’m not allowed to say exactly when or anything, but there are plans to go out to the UK pretty soon. It feels pretty weird for me not to be able to tell you. (manager shouts something in the background) In the fall! I can say in the fall. (laughs)

What’s your live set-up like at the moment? Is it more of a show, or a DJ approach?

Oh, it’s definitely more of a show. I am not a DJ at all, I have never spun a record in my life. I would be terrible at that, I have no perception of how to mix songs well. The live show is all my own productions, with me basically singing and toying with the laptop and other electronic things that are happening.

Finally, as the internet seems to be obsessed with reflecting on such things, it seems appropriate to ask what music you have listened to most this year?

With everything that’s been going on my music listening has been quite sparse. I’ve been listening to a lot of Cocteau Twins. I had never listened to them before this year, but I just got the big compilation that was put out on 4AD, Lullabies to Violaine, which is like 4 albums long. I have that on a huge playlist and have been listening to it a lot. Also, I really like the Toro Y Moi record, it’s so crazy and I’ve never heard anything like it. But other than that I’m not sure, I haven’t really stepped back and thought about it yet.