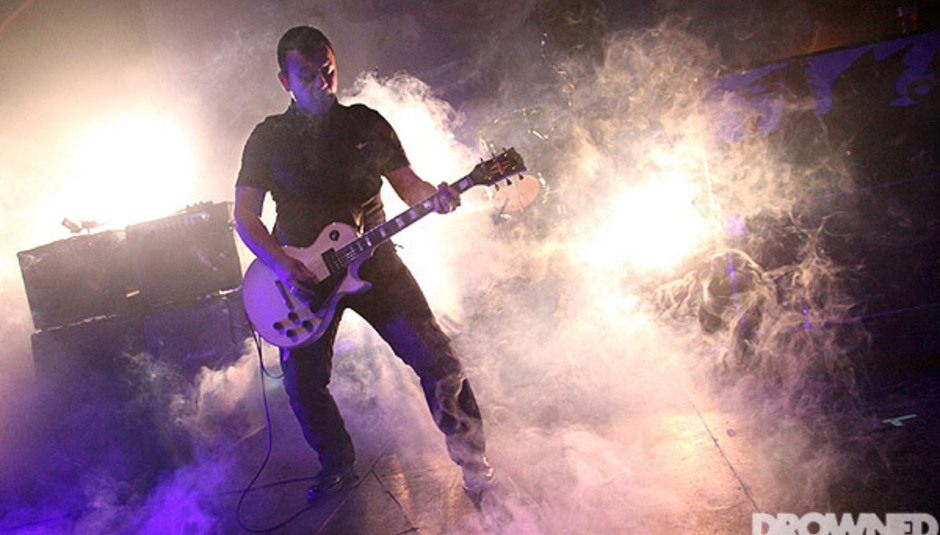 While the proverbial "secret show" seems to be a fairly common occurrence for major recording artists about to hit the comeback trail, Hammersmith Working Men's Club is about as unlikely a venue as you're likely to find for such an event. Set in the middle of a high rise estate several stones throws away from the more widely renowned Apollo (aka The Back of Beyond), the 1960s interior decor and heavily deteriorating brickwork of the outer walls badly in need of a good pointing suggest its best days are long gone. Yet, despite its quaintly intimate veneer, once inside the acoustics threaten to tear the ears off anyone standing too close to any one speaker, such is the ferocity.

Playing to an audience of just 250 people comprised of various incumbents of the media, music industry and competition winners, it's something of a step back in time for a band whose days of trawling the toilet circuit were over two decades past. Prior to the Manic Street Preachers arrival on stage, those of us that have arrived early doors in order to grab the best vantage points are greeted to a soundtrack of 'Lazy Line Painter Jane', 'Teenage Riot' and 'French Disko' among others. To some it feels like the perfect indie/alternative disco and in such a setting as the Working Men's Club, it carries a prom-like demeanour about it.

If 2009's Journal For Plague Lovers heralded the Manics as a revitalised force, albeit on the back of its main lyrical content emanating from the notebook of estranged guitarist Richie Edwards and harsh, acerbic production of Steve Albini, anyone that witnessed the accompanying live shows couldn't have been anything less than impressed, startled even, at such life affirming performances that in some ways were a throwback to a vintage, if frenetic, era. Next month will see the release of album number ten, Postcards From A Young Man, a record the band have already taken liberty to stress should not be seen as a direct follow-up to its predecessor. It is at this point where the introduction of the Cardiff Vulcan string quartet seems most appropriate, swelling the Manics ranks on the tiny stage to a grandiose nine this evening in front of a projected backdrop of the album cover, a photograph of Tim Roth err...taking a photo.

With most of the assembled throng expecting the majority of tonight's set to form a showcase for the new record, it is something of a surprise that only four new songs are debuted this evening out of the sixteen they play. Opener and forthcoming 45 '(Its Not War) Just The End Of Love' sounds like a refugee from the Everything Must Go sessions. All heartfelt strings and blustery choruses, despite the false start - more of which litter the set throughout the show prompting Nicky Wire at one point to admit such errors were the reason why his band didn't become as big as U2 - it's no surprise that '(Its Not War)...' finds itself thrust as the radio-friendly lead single off Postcards... given its similarities to their most commercially salient output. The other three newbies however don't strike as prominent a chord as far as first impressions go. 'The Descent (Pages 1 & 2)' is introduced by James Dean Bradfield as being only the third song they've ever written on a tourbus and its fleeting opening courtesy of the Vulcan foursome rings out like a close cousin of 'Whatever' by Oasis, as bizarre as that may seem. The album's title track meanwhile is a more seventies kitsch affair, that actually re-imagines Wire's proclamation that this record will have a "Heavy metal Motown" feel to it if The Glitter Band or T-Rex ever swapped places with Black Sabbath. The final debutant, 'Some Kind Of Nothingness' - again attempted twice after a mix-up over where the guitars come in first time round - has a more downbeat feel than the other Postcards... material showcased. Although co-singer on record Ian McCulloch is conspicuous by his absence, JDB more than makes up for it in his usual charismatic manner. Nevertheless, first impressions of the new material - albeit only a third of the record's total tracks - would suggest the jury is still out in force.

The rest is something of a greatest hits set that simply underlines why the Manics are still held in such high esteem. 'Everything Must Go' is introduced by Bradfield as "Welcome to our pork scratching evening tonight", while 'Motown Junk', preceded by a verse and a chorus of The Jam's 'Town Called Malice' and sandwiched in between the Generation Terrorists duo of 'Motorcycle Emptiness' and 'You Love Us' still sounds as fresh and invigorating as it did upon release some twenty years ago. Add the visceral 'Faster' and 'Jackie Collins Existential Question Time' in double quick succession and even in this Sony employee heavy climate, it's clear the band's hearts remain in tune with their confrontational punk rock roots. A now familiar 'Design For Life' closes the show, JDB apologising for all the "fuck ups" his band make tonight, some even on the more familiar numbers. Nevertheless, having reaffirmed their status as possibly the most exciting and inspirational homegrown rock band of their generation, those of us fortunate enough to witness such an intimate display of vigour and intensity can forgive them almost anything, even the much maligned Know Your Enemy and Life Blood, which thankfully are both left well alone this evening.

As we file out and head through the backstreets of Hammersmith in search of late night buses and the underground station, one can't help but raise a wry smile to the band who initially threatened to split up after their first album having finally made it into double figures. Not least because, at this barren moment in time, a band like the Manic Street Preachers couldn't be more relevant if they tried. Hopefully they'll be injecting a hefty dose of passion and enthusiasm into a disillusioned industry. Welcome back!