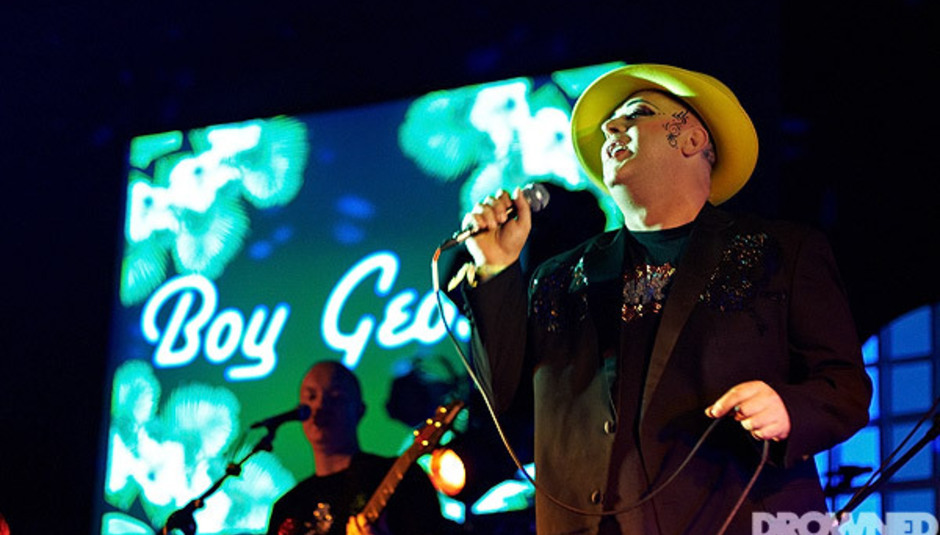 A fistful of printed out sheets, carefully worked out timetables and best laid plans become irrelevant before I’ve even set foot upon Glastonbury Festival turf; as my lift share companion drives over the crest of a hill, the site stretches out before us, its sheer size bringing an involuntary gasp from my throat. Here we go then; five days that’ll take in sunstroke, hospitality sterility, the perils of supermarket spirits, dusty tracks, dustier hippies, broken toes, sex dolls, stone(d) circles and, oh yeah, what I’m here for - a fair bit of music.

Here’s how to make a great start to Glastonbury: grab a lift from someone who, it turns out, works at one of the festival’s vegetarian catering trucks. Not only is my driver on the Wednesday an excellent talking tour guide, having worked there for some years, but he also ensures that over the weekend the 10p noodles peeking mournfully out of my bag need never be touched. And those queues to get in that everyone was fussing over? Three and half hours from Shropshire it takes, travel fans - picking to travel during the football proving a great shout from my herbivorous friend.

What it was I was expecting to find as I entered the festival, I’m not sure; something akin to what the Green Fields turn out to be, probably…as it is, my first impressions as I walk through the entrance gates, giddy with excitement (and the hulking rucksack on my back) are that it’s remarkably normal; thousands of cheap fold-up tents destined to remain here long after their owners, an acoustic guitar-wielding troubadour already strumming Jamie T’s ‘Sheila’ to his drunkenly awe-inspired camping party, some impressively premature substance casualties and quite a lot of England flags. The football was shown at the Pyramid Stage on Wednesday and a steward tells me it was as busy as any headlining gig there. At the hospitality camping, I pitch up next to a couple of Brummies who chirpily inform me they’re here as a work bonus, whilst a little further up the field a sharply dressed fella’s on the phone to his stockbroker. I’m not really getting the vibe of free-spirited utopia here - one couple are grumbling about the uneven ground, it’s a farm for fu.. - but the showers are good, and besides, a trip right across the valley to Stone Circle is far more what I’d hoped for; namely sitting about getting tipsy and craicing on into the night alongside thousands of others until sunrise, our collective anticipation of the weekend rising like the hundreds of Chinese lanterns being sent off into the pale sky.

Hi Thursday, you’ve got a bit warm haven’t you? And what’s further, you’ve reduced me to wearing a pair of old shorts which, combined with my beard, mean I probably shouldn’t hang around the Kids Area by myself…that’s not what I had in mind today of course, in fact I’m not sure what I want to do. Do I fully immerse myself in the Green Fields, or do the music critic thing and, y’know, watch some music…a fair part of me just wants to get muntered all weekend to be honest, but as everything’s been funded solely by sales of childhood Lego, this weekend is slightly toned down from the debauched frivolities of Andrzej’ last year (though some hours on from pondering this, I am to be found at one of the many hidden bars of Shangri-La haggling animatedly over cider with a sailor-clad barman, eyes glazed.) In the end I do a bit of everything, but only after a quick look around the hospitality area behind the Pyramid Stage, partly out of interest and partly because I want to persuade DiS photographer Gary Woltensholme that it’d be “a laugh, honest” to watch Boy George later on. It’s a soulless place is hospitality, anyone keen to point out the festival’s modern day mass corporatisation need look no further than this odd bubble in the centre of the site; people swan about in their finest, talking loudly over the top of each other, to people they’ve never met before but feel they should. There’s a restaurant here, pretty mad; “We’ve been booked in for a meal at 7 tomorrow” I hear one puffed up gent tell his wife. Well that’s just splendid. Christ. I get out of this depressing vacuum behind the Pyramid Stage quickly and wander over to work away at some pear cider by the West Holts Stage, something that leads me to become somewhat transfixed up at the Green Fields by a man who, to be fair, is proving himself a dab hand at masonry. The Green Fields are much more like it, a relaxed mish mash of people who share in their passion for the environment and love for the natural world… that made me sound like one of them didn’t it? It’s a pocket of what was probably fairly prominent round these parts back when the festival started in 1970, and a welcome area to amble about in after the day’s sterile opening. Sure there’s the stuffy, VIP side of the festival, but aside from trekking through it to get to the other side of the farm (which is a great time saver, it has to be said,) I don’t have too much contact with it; why would I? And why should they? There’s a whole makeshift town out there to explore.

A stumble down to The Queen’s Head, along with a good few thousand others, sees My Luminaries, Howls and Egyptian Hip Hop (I inexplicably miss Two Door Cinema Club, and I’m not quite sure what I was doing instead,) deal with probably the biggest crowds of their careers with a mixture of unabashed delight, dour indifference and chemical unawareness. It’s the latter who impress most - and no, I’m not just saying that as Manchester’s DiS columnist. It’ll be a good couple of years yet before a review of them doesn’t come with an age disclaimer - and the vocalist’s pencil moustache isn’t fooling anyone - but their predominantly electronically assembled sound is a fine representation of the sound of now all mashed into one - bits of Hype Machine electro remixes, post-punk revivalism, MGMT/Black Lips hippery all muddled up into one colourful shape.

From there it’s off to the Dance Village, its circular layout already packed as Beardyman fills the Wow! Stage with a smattering of well-known electro and techno. We’re only here to have a giggle at Boy George; I’m sure it’ll be alright when everyone leaves after Beardyman right? Except, err, no one moves when he’s finished; either there’s been an apparent Boy George career revival that’s gone completely over my head or, maybe, everyone’s here for the same reason as me. Whatever, it means that the infamous 80’s pop artist comes on almost an hour late, each passing minute makes it more of a principle that I’ll get my cheap laughs - Gary’s not happy - and finally when he does come on, with a rather self-indulgent cover of ’Nobody Knows The Trouble I’ve Seen,’ my titters aren’t quite as belly holding as I thought they’d be. Everyone else though are going wild for it - probably not too surprising given that your average student would leap at the chance of a glorified karaoke. But yeah, he does ‘Do You Really Want To Hurt Me?’ and ‘Karma Chameleon,’ and they’re pretty terrible, but they’re also sorta…fun.

And then it get’s a bit hazy, but pleasingly so: supermarket brand vodka, The Park, the twisted confines of Shangri-La and stumbling home in the half light of morning…I don’t quite feel like I’ve “arrived” at Glastonbury yet but then- no, it’s getting too late in the morning to start pondering this…tomorrow‘s upon us. Bed.