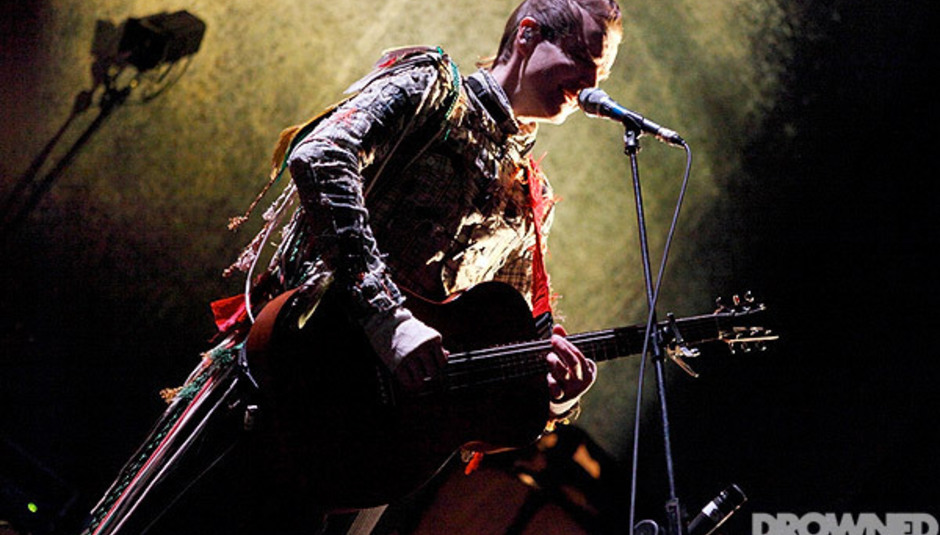 'Twas the end of the Sonar line for DiS reviewers Alex Baker and William Grant - let's see how they got on in the final episode. Thursday's report HERE, Friday's HERE. Photo by Burak Cingi.

It falls to The Slew, an Australian band featuring two members of Wolfmother and scratch-master Kid Koala, to wake me up abruptly. And that they do, with their OTSA-style stoner rock standing out as one of the highlights of the weekend’s daytime. Yes, the thought of DJ-meets-rock did bring the spectre of nu-metal into my head, but it’s headbanging fun throughout and doesn’t have to worry about creating a reinvigorated trend of three quarter length shorts and backwards caps. (WG)

The newfound respect, if you can call it that, that I have developed for Uffie is purely based on the fact that she’s not Ke$ha. She may be an excruciatingly irritating knob but at least she’s not quite as big a knob, and at least she was doing it first. However this perceived fondness is extremely hard to maintain when you are faced with the oh so dull French electro beats trying but failing (alas!) to drown out a whiney, obnoxious and self-serving voice. Uffie is the physical embodiment of Vice magazine, pretty to look at but at the same time rather on the vale side. At one point she walked off stage for 10 minutes, the excuse given being “Sorry guys, I was up til 7 a.m. last night and I’m really tired”. So were the rest of us love, now bloody sing! (AB)

Jonsi’s set is surprisingly under-attended. Well, maybe not so surprisingly considering the off-Sonar parties and other-worldy hangovers that are in evidence this evening. But what the mass miss, the few bask in, as it is a glorious recollection of his recent solo opus Go. (WG)

Moving into Sonar Lab, it’s now the job of Fuck Buttons to continue the euphoric vibes. I’d somehow forgotten the power they offer live. It’s monumental. ‘Surf Solar’ whips everyone into a trance, while ‘Olympians’ is anthemic as you like. And as the closing thumps of bass of ‘Flight of The Feathered Serpent’ bring matters to a head, they seem to have truly solidified their status as electronic crossover kings. (WG)

One of the enduring images of the television coverage of last summer’s festival circuit was seas of white middle class kids fixing up, looking sharp and jumping up and down to ‘Bonkers’. True to form, the scene was recreated to a tee, only in grimy darkness amid flocks of gentlemen weaving to and fro selling washing powder for 50 euros. The first thing that stuck out about Dizzee Rascal’s set was the lackadaisical approach to visuals. While you may be able to get away with plastering a silly photograph of yourself across the screens above you and not make any other effort toward decoration in mortal festivals, in Sonar you are competing against the most skilled and complex AV lightshows and as such it just wont do… unless you are Dizzee, of course. By the end of his set, jammed packed with favourites ‘Fix Up Look Sharp’, ‘Jus’ a Rascal’, ‘Holiday’ and of course the aforementioned ‘Bonkers’, along with a cover of Major Lazer’s ‘Pon de Floor’, he had managed to achieve, without any frills, one of the best atmospheres of the weekend. (AB)

The lineup on Saturday night was without a doubt weaker than Friday’s, but resulted in less tension as acts like Caspa and The Chemical Brothers had no one of note to clash with. Long before The Chems took to the stage the entirety of SonarClub was packed cheek to jowl and the massive venue was fizzing with excitement. Few other acts in electronic music, other than perhaps Daft Punk, can truly consider themselves blockbuster DJs, a fact that was confirmed by the massive cheer which erupted when they took the stage. This status however has lead to a certain resting on their laurels and an unwillingness to mix it up. However, after 15 years at the top, they have earned the right to kick back their heels and observe the mayhem. Playing, as at their four night stint at the Roundhouse last month, in front of a humongous curved LED screen, the visuals and laser show that they put on absolutely destroyed the crowd. They spent the first 45 minutes to an hour playing material off of the new album Further, which was followed by a brief intermission and then a final hurrah with some of their golden oldies. While I can appreciate the desire to show off their new material, this approach of playing a solid 40 minutes of songs that most people haven’t heard yet meant the atmosphere for the first half of their show wasn’t as good as it could have been. That, however, was before ‘Hey Boy, Hey Girl’ kicked in and with it the moment that everyone had been waiting for. The half hour following on from the first acid-tinged tendrils of the track was one of the highlights of the festival, destroying all and sundry. In keeping with their new ‘underground’ sound, they picked the more clubby dance-orientated songs from their back catalogue, notably the likes of ‘Saturate’ and ‘Believe’. The Chemical Brothers are not and will never be groundbreaking pioneers, but they certainly do know how to put on a good show. (AB)

The Chemical Brothers' set does a fine job of stealing damn near everybody in the entire complex, leaving me with room to roam at the front to bask in the LuckyMe label showcase. First up, American Men offer up something that merges between Three Trapped Tigers and Hudson Mohawke. A combination of glitchy, swooning electronics and post-hardcore guitars are a welcome change from the heavy computer noise that has preceded them, although the throng once again seem perplexed that no 4/4 beat emerges. Machinedrum follows and whips the crowd into a new groove with wonky electro movements reminiscent of Modeselektor, before Lunice (replacing a cancelled Mike Slott) proves his worth in the line up by offering the most entertaining one man show of the weekend. His samples of Beyonce choruses mixed with watery r’n’b beats and melodies doesn’t feel as if it could be pulled off, but his performance is so full of energy and glee that it infects the now sparser-than-ever crowd. He’s a beautiful ray of light in the ever thicker darkness. (WG)