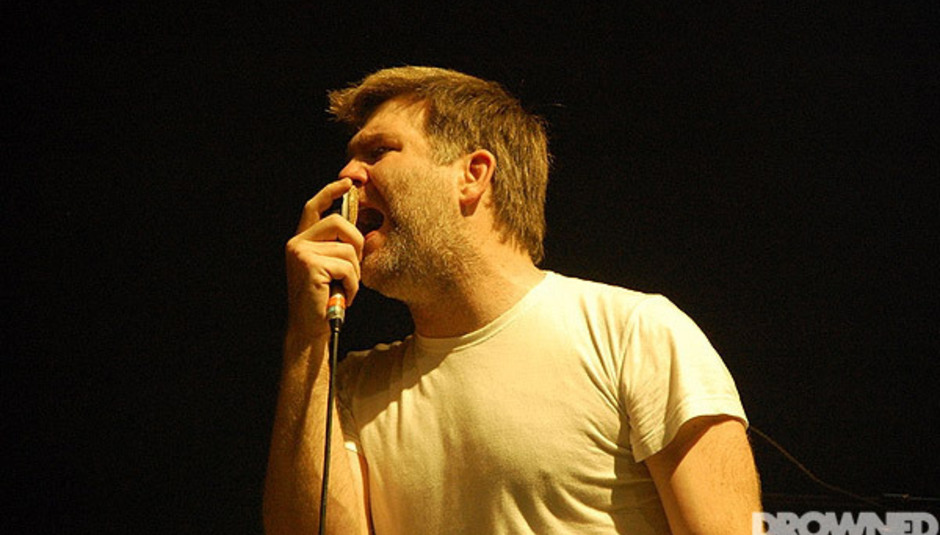 The continued adventures of Alex Baker and William Grant at Sonar 2010. Here are their Friday thoughts - for Thursday go HERE, Saturday HERE. Pictures by Ben Brown.

Nedry’s washes of resonant bass immediately draw the attention of the crowd, the sound almost apocalyptically loud as their set begins. But they suffer in the heat, and with the sun pounding down onto an ever more promiscuous crowd, Ayu Okakita’s Bjork stylings just don’t sit quite right. (WG)

It’s then back down to the sweaty, dungeon-like surroundings of the Hall where the daunting sound of landing helicopters and beams of white light fill the room, before a lengthy stab of dub bass smashes. Having been so focussed on the pop laden prowess of what is to come, King Midas Sound act as a beautifully sordid reminder that not all is good and happy-go-lucky in this escapist world; that the human element is still as raw as ever in the surroundings. And it’s dark as hell. (WG)

Walking back out into the now seemingly permanent sunshine, it seems that New Young Pony Club’s new material is striking all the right chords for the beaming crowd. And while I wish to stay, the prospect of another multi-sensory mindfuck in the form of Nosaj Thing beckons me down to the dungeon. His Drift album was adored so last year, with comparisons to Brainfeeder label king Flying Lotus being thrown around wantonly (and, just occasionally, quite fairly), but in truth this live set up of his was unsuited to its time and surroundings. (WG)

It’s then over to the main stage once more to catch a joyous homecoming from Delorean. Their canon recently widened by their Subiza LP, the crowd is massive and willing. But the sound does them no favours. Completely soaked in reverb, the infectious melodies they normally offer seem swamped. I still have a good dance to ‘Deli’ and ‘Stay Close’, but without knowing too much beyond that everything just gets a bit lost. Nevertheless, the masses seem to take to them very kindly (despite a lack of applause, which seems to be a running theme throughout the days) as they surf on those waves of sound down to the awe-inspiring experience that is Sonar by Night. (WG) Hot Chip bring the first beaming smile to my face, and finally, I feel at one with the crowd. Playing a hit laden set, which opens with a monumental version of ‘Boy From School’, they couldn’t be a more perfect way to enter us into the huge night space. Alexis Taylor is his usual eccentrically-dressed, quiet and amiable self. Oh, and ‘Over and Over’ could not be more anthemic, the lyric “the joy of repetition really is in you” feeling just so apt for what is to become a very hedonistic evening. (WG)

It’s hard to find someone who seems to have as much fun live as Flying Lotus. Having been a long time fan of his, but first time live viewer, it’s a surprise just how little of his own material he plays. But a man with such a wealth of musical knowledge and talent he is, and he proves nonchalantly that he can weld whatever he wants into a smile inducing whole. Switching effortlessly from downtempo electronica into thumping techno and then throwing in a remixed version of Radiohead’s ‘Idiotheque’ in at the end, a psychedelic stupor hangs in the air and its disorientation is glorious. (WG)

The Sugarhill Gang’s performance follows, nothing less than a perfect demonstration of how the old has been ably fused with the new at Sonar. The crowd goes absolutely mental at ‘Rapper’s Delight’, showing that there’s just as much life in the classics of hip-hop now than there ever has been. The crowd goes along with the groove throughout, but the Gang do have the constant cross of ‘Rapper’s Delight’ to bear, despite an amazing rendition of Grandmaster Flash’s ‘The Message’. They even pop along to rhyme over Hudson Mohawke’s ‘Fuse’ just after, the adrenalin obviously still pumping wildly through them following a very well received set. (WG)

But HudMo himself struggles to maintain the flow, with his set tainted from the very start by technical issues. Well, not such much ‘issues’ as his entire set up being completely fucked. The LuckyMe MC accompanying him as well seems completely out of place, and I can only remember him really shouting “Hudson Mohawke” about 200 times and very little else. A disappointing show for someone with undoubted talents for such a place. (WG)

Being the first ‘big’ act to grace any of the stages at Sonar by Night, Air seemed a perfect way to start the evening. Rolling out old favourites like ‘Kelly Watch the Stars’, the demure and oh so very French duo (performing as a band) managed to cast their spell over the ridiculously vast space that is SonarClub without seeming to try, or to be honest, give a shit. Unable to get any closer than the sound booth, they were but white specks in the distance, however the swooping cameras playing out on the six massive screens positioned above showed Nicolas Godin striding around nonchalantly flicking his fringe, playing the guitar and executing Air’s floaty-beautiful sound with inhuman precision. (AB)

Mary Anne Hobbs’ DJ set suffered from the first of many major clashes over the course of the weekend, and as such we were only able to catch the tail end as we joined the mass exodus from Air. Entering the first of the two outside stages at Sonar by Night, the deep earthy dubstep proved a stark contrast to the ethereal electronica that had preceded it. Like Rob da Bank at Sonar 2009, the Radio 1 DJ suffers not from the need to impress with obscurity and the hit-laden 10 minutes prior to Joy Orbison left me cursing whoever had done the scheduling. Alas it was not meant to be and the reins were handed over, via an MC who shouted “Sonar! Are you fucking ready for Mr Joy Orbison!?”. Unfortunately the MC’s role extended beyond the intro, and as his occasional contributions continued, a nearby member of the crowd uttered ‘The music’s good, I just wish this dickhead would shut up’. That notwithstanding, Joy Orbison played a solid set, including his hit ‘Hyph Mngo’, and along with Caspa the following night showed how quickly dubstep is evolving. Gone is the stiff torso-nod and here is the filthy, back to its jungle roots, music you can have a jive to. (AB)

If James Murphy stays true to his word and disbands LCD Soundsystem after their current world tour, then this performance will stand out as one of the defining moments of their final hurrah. Boosted by the amazing, erm, soundsystem, each component of their music was crystal clear across the expanse of the 10,000 or so people who were watching. Having stated in an interview that he hates it when bands only play new material, Murphy stayed true to form and rolled out all the classics. It is simply astounding that all of said classics come from a discography totalling three albums and amply displayed how much they will be missed. From ‘Daft Punk is Playing At My House’, joined by with the requisite Murphy cow-bell performance, to ‘All My Friends’, they transformed the sea of people into a gyrating mass of limbs and smiles that shouted every lyric right back. Being the soppy git that he is, Murphy told us about the special place that Sonar holds in his heart, as it was the first festival to give LCD a slot, and had hosted them for year after year after year. The reverie was broken by stomper ‘Tribulations’ pounding into the crowd, eliciting a reaction that was only outdone by the breakdown of the set’s closer ‘Yeah (Crass Version)’. (AB)

Richie Hawtin’s Plastikman was the victim of the second major clash of the evening and left me cursing the organisers once more as all but half an hour of his set overlapped with LCD Soundsystem. As such I was only able to catch the last twenty minutes, but what a twenty minutes they were. Set up behind a curved mesh of LED lights, his silhouette appeared from time to time behind the flashes of colour that flashed in time to his music. Hawtin has stated in an interview that the aim of his Plastikman sets is to take away the boring and premeditated and mechanical nature of playing electronic music live and to instead strive to control everything live with no pre-programming. With the help of Hawtin Snr, an electrician, he has created hardware and software which enables him to control the visuals spontaneously at the same time as the music. The visuals therefore were organic and suited the music perfectly, but were still a work in progress. Ideologically at loggerheads with the likes of The Chemical Brothers who seem to have every bit of their set programmed and ready to go way before they go onstage, the overall live effect is not as dramatic or all encompassing, but is definitely on the way there. As for the music, well Hawtin packed the outdoor SonarPub with adoring fans and enchanted them to the extent that long after he had stopped playing and once Dixon had taken over confused revellers were still chanting “PLASTIKMAAAN” and clapping their hands. (AB)

In the final major schedule clash of the evening, Booka Shade went head to head with 2manydjs and won by a whisker. As with their album launch party in Camden a few months back, they started strongly, dropping in by far and away the best track they have ever produced, ‘Darko’ quite early on. They are essentially on tour to promote the recently released More!, and thus their set progressed with a good mix of old and new material. ‘Teenage Spaceman’, along with ‘Regenerate’, is one of the strongest tracks off their new album and its otherworldly atmospherics, amplified by the sweeping coloured spotlights that reached up into the brightening Barcelona sky, began to wind down the first night of Sonar, perfectly leading into Carte Blanche. (AB)