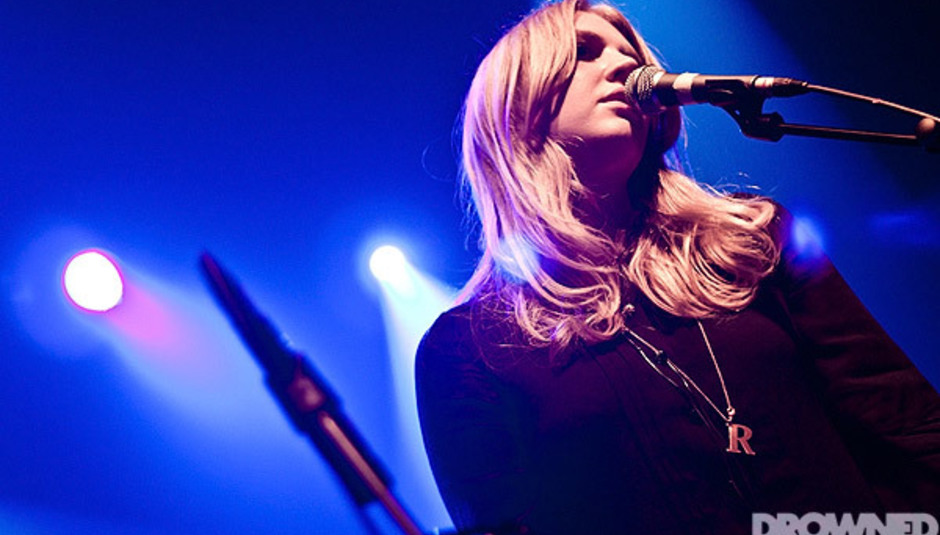 Owing to an earlier unplanned desperate fix of a washing machine, Spectrals are the victims. Which is a shame but, given the presence of other bands on the rest of the bill, is far from unrecoverable. The first of those support bands to shower me in melody, harmony and sweetness is Summer Camp, whose perhaps irrelevant back story is one we're all more than familiar with - it will not be recounted again on this page.

The important bit is that they've only just started playing shows very recently and tonight must be something like their tenth. I'm not certain but it isn't very many. The maybe obvious point to be made here is that they're improving as a live band at a more-than-promising rate. That may seem like being damned by faint praise but it's not, really. In the course of 25 minutes there's nowt out of place, tight, tight, tight. When this is combined with the sprawling and thick songs in their catalogue it makes for a mightily enjoyable experience indeed, with the '1988' just about sticking its neck out in front of single 'Ghost Train' for set highlight and probable 'best song'. But there'll be a few more contenders in time, I'm certain.

The similarly allotted Veronica Falls don't need much more than the time they're given to accurately convey their '80s fuzz-sprinkled indie-pop ethos. It can probably be summed up in the space a single track, in fairness. Being to the point is an advantage with these sort of support slots and it's also no bad thing that the immediacy on stage is even enhanced, with the volume and effort – if not exactly movement on stage – cranked up to near-maximum. There may now be a small legion of bands doing something between 'quite' and 'very' similar to this four-piece – and a large legion about a couple of decades ago – but it also makes it harder for each of these acts to stand out above their peers. On this evening's forceful renditions of 'Beachy Head' and assorted other singles, Veronica Falls won't find doing so too much of a struggle.

In comparison to Summer Camp and Veronica Falls, Slow Club are a duo who have taken a more traditional and measured route in their career so far. There'd always been something, somewhere in the back of my mind that had these labelled as pleasant-yet-pedestrian folk-pop. Maybe it was the thought that there's only so much two people can do. I don't know, but it's sometimes good to have your preconceptions challenged, if not exactly your words shoved right back down your agape gullet.

The presence on stage and in the soundwaves was helped in the first segment by Jeremy Warmsley on bass and live drums (a full drumkit, like) giving the band not just a new aspect but a whole new dimension. Sounds emanate from stage that you'd more quickly associate with Queens Of The Stoneage, so powerfully played the opening sequence is. After a few the additions relinquish their place on the stage for Slow Club to do what Slow Club do – serenading us with their wit, constant charm and ultimately what we're here to see – their appealing folk-pop. It is by no means an eventful set as much of Yeah, So is rattled through with perhaps a bit too much pace, but the heart is warmed more and more throughout.

Given the expanse of KOKO – not to mention the numerous levels and balconies high in the heavens – you could question the wisdom of Rebecca and Charles unplugging what little they have to unplug and seeing how far their chords and choruses would travel. But they do. And despite this venue's reputation for attracting a bunch of natterers almost all remains hushed, save for the clinking and clunking bar staff at the back. 'Wild Blue Milk' strummed and sung in this manner is heavenly in the extreme. That particular track is among the best these two have produced but the newest single, 'Giving Up On Love' obliterates every other slice of pop they've ever performed. As a sheer pop song it isn't far from perfect and in the short and sweet stakes is monumental. Rebecca and Charles may never surpass it but that's fine, as I'm happy to hear them play it live a hundred more times.