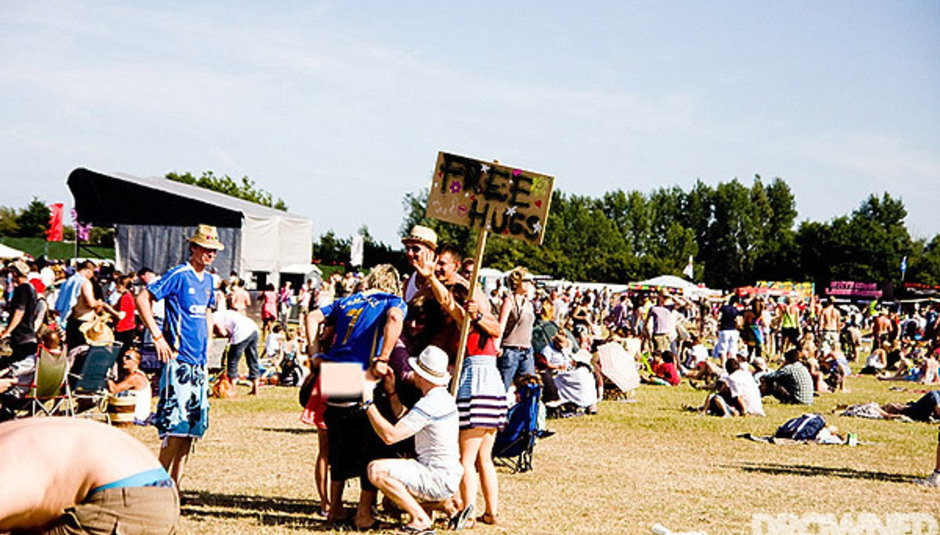 Recently we chatted with Hop Farm founder, organiser and general person in charge - Vince Power. The festival - which takes place in the unusual location (let's face it, there aren't many other festivals around that way) of Hop Farm in Paddock Wood, Kent - was founded in 2008 with Neil Young as the first headliner. He covered The Beatles in his set, which I'd imagine was quite something, even if I wasn't there myself, but you can imagine.

It was also founded on the premise that there would be no sponsorship or branding on the festival site, something we talk of in more depth when we met the man himself last month. Power says that this was borne partly out of a desire to want to put on a festival that was "back to basics" and partly because the money wasn't there for sponsorship. Whatever your view on this, I think most can agree that a festival where you aren't bombarded by banners, signs and all things corporate - and providing you with a choice - is a bonus. And the music and atmosphere obviously help.

This year, Hop Farm continues its tradition of booking a fairly major act to headline the final day, having expanded to two days from one day. In 2010 it's the turn of Bob Dylan, who headlines the main stage on Saturday. But first, here's what's happening in a roughly chronological order!

Dylan isn't the only BIG NAME HEADLINER: Blondie are quite possibly second on that bill, although they do face a bit of competition from the otherwise massive Van Morrison. I'll let them two fight it out between then.

Off the main stage there are a few of our favourites, including Sparrow And The Workshop who, if nothing else, have created one of my personal songs of the year in 'Last Chance' which, like the rest of their 2010 album Crystals Fall, does a fantastic job in whipping up a whirlwind of hard-feeling country folk. On the other side of the folk spectrum are Oxford's Stornoway (interview coming up in the next few days) whose carefree nature could not by freer, or more careless.

The Mercury nominated Sweet Billy Pilgrim (who we interviewed here) also pop up. Tim says it was a nightmare trying to convert the sounds on record to the live setting, so do go and see if he's managed to pull it off, though we have no doubts that he will. He's a very talented man after all. This is not mentioning Afro Celt Soundsystem and Dr John who have now just been mentioned. It goes without saying that you're going to want to see Dylan if you're at Hop Farm. That Ray Davies is probably worth a quick peek, too, I heard he used to be in some old band or something?

Elsewhere, there are plenty of people playing who are young enough to be Dylan and Davies' grandchildren, including Mumford & Sons, who also play the main stage under the aforementioned two, along with fellow folk whippersnappers and actual, real life friends Johnny Flynn and folkstress Laura Marling, who is rarely more than seven inches away on a bill poster from M&S.

Outside of the main stage on Saturday there's more than enough to keep you going, including The Magic Numbers (who we interviewed here). Conor O'Brien and Villagers have created, in Becoming A Jackal, one of the albums of the year already, and that's a status that will stick until the last day of 2010, that is nearly certain.

The word 'Folktronica' may have been invented for Tunng whose album ...And Then We Saw Land is a relative departure for them, having lost a member. It contains some of their finest work, no doubt, 'Hustle' being up there. I'd be lying if I didn't say that Hypnotic Brass Ensemble looked a little out of place on this bill. They do. But then again I'd also be lying if I said that their live was rubbish. Because it's not - it's utterly compelling. You will wonder how the hell they manage to stay standing after it, as so much energy abounds from the stage.

Warbling wonder Devendra Banhart also makes an appearance, plus there are a plethora of other acts to be discovered across the two days, and a myriad of comedy acts to balance the music with, including Bob Mills, Sion James, Simon Bennett, Pam Ford and Lee Nelson.

And now, for the all-important Part II of the Hop Farm festival preview, which includes musical delights in the form of a playlist. But not just any playlist, no. This one is divided up into two sections. The first of these is a selection of our favourite artists who are playing the festival itself, and ones we think you should definitely NOT miss, like. Not that you would, but still.

The second section we quizzed the likes of The Magic Numbers, Stornoway, Sweet Billy Pilgrim, Tunng and The Midnight Juggernauts - who play the sister festival, Benicassim - to tell us what they've been listening to lately, what they're really into, whether old or new. And this is what we got. I think Tim from Sweet Billy Pilgrim could have gone on for days, but we had to stop him! Anyway, here's what it came out like. Click here to listen to Part I and here for Part II.

View our In Photos special from last year here.