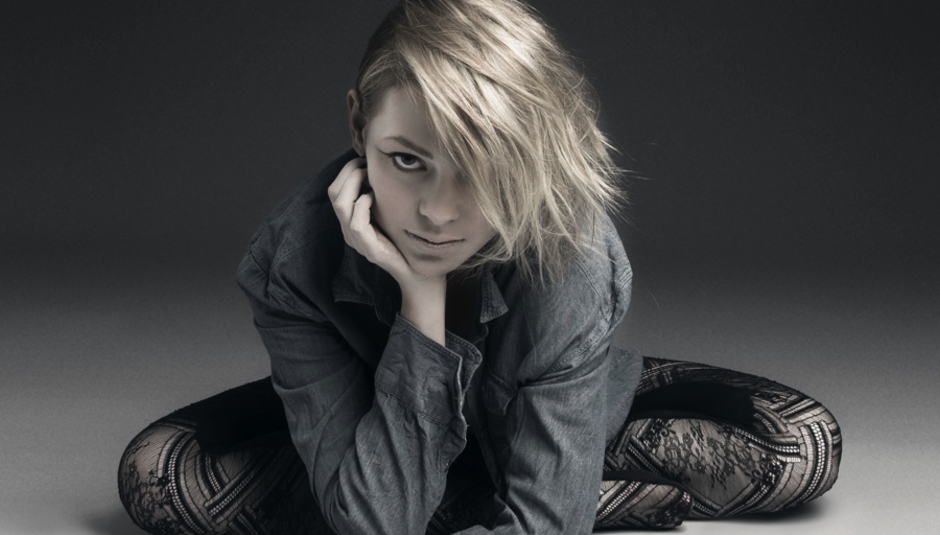 Not so rad news everyone: Wendy Roby is away. This leaves me, the site's founder, the unenviable task of filling our most popular columnist's Reebok hi-tops.

As a pre-warning to any regular Roby readers, I have little idea how to make 'funnies' and the only interesting anecdotes I can share from my childhood involve rainy days playing Bubble Bubble or Wolfenstein 3D and crashing mountain bikes at a not so high speed.

However, I sometimes don't hate 'the musics'. In fact, often I prefer individual songs over snorefest albums. Sadly, neither The National, Paramore or Lady Gaga, have a new single out this week, or else I'd write you a trillion word dissertation on one of them but thankfully there is this little lot.

Ms. Roby will be b-b-back next week, promise. In the meantime, I appreciate your patience.

TRACK OF THE WEEK:

Oh, Uff, let me count the ways... Ahem. Yes, this is the 'newie' from the long-awaited debut LP Sex Dreams & Denim Jeans from the debutant everyone loves to hate, Uffie. Much-like 'MCs Can Kiss' it doesn't so much start as kick your finger from the play button. A bike engine revs then snarls a little. Then it's all beats that snap 'n' crack like Ke$ha trying to stand upright following Justice's Marshall stacks 'accidentally' falling on her. Oh, oh, oh, and then, just as the wobbling Cher-coda beds in, along comes Pharell Williams (Yeah, THAT, Pharell!) rap-saying shite like "I feel like I'm in the movie Momentum when I don't have a pen..." to emphasis that this song is about attention deficiency and, somewhat unrelatedly, how the escapism of sitting in the back of an SUV is strangely comforting - although, to be fair, I'm pretty sure no-one reading this was expecting Uffie to come back as James Murphy or Mercer. All is pretty schweet until Mr Neptune offers up a side order of perv: "my ghetto eyes on her ghetto ass," but f-f-frankly, with the prick-tease-pop Uffie's been 'dropping' on the web for the past few years, this is hardly a shock. In conclusion: the hook is killer, the production is utterly badass and you will love to hate this and she will love you for spreading your hate.

Next up, 'The Collector' but first, a pondering segue... The 'blog-rock' underground is now so overground (but not so overground that it has become lamestream). Broken Social Scene blowing up courtesy of Pitchfork was the year-zero for blog-rock - agreed? If so, nearly a decade later, we're now living in the post-Black-Kids and post-Merriweather age where seemingly, given enough slogging away or a few carefully clustered days of hype, just about anything can happen. In fact, by the time I finish this sentence, Here We Go Magic could be bigger than U2 and by the time you finish this article they'll be back to being barely known, as they were when I saw them play an extended soundcheck at Great Escape last month... Back to my meandering for a second; by 'anything' wot can happen, this includes Arcade Fire (whom, for the record, I never really liked in the first place) coming back, putting two shocking songs online and loadsa people saying how amazing they are. Then there's the whole M.I.A. attention-seeking, calculated web-trolling, ginger genocide, which seemed about as shock-n-awe-tastic as watching Independence Day the day after 9/11. There's also the big ol' mystery of why not having a MySpace is such a big deal, especially when the bands are distinctly average (hello Wu Lyf, Islet, etc...), as if scarcity of photos and songs is such a stinking turd in the face to the information age. I don't get it; why is being contrary to the on-demand as a default setting of the modern world, such a big deal? The hint of a bit of myth and a certain new music editor gets in what my Gran would call 'a tizzy'. Anyway, Here We Go Magic make no secret of who they are but they do generate a semi-anonymous burr, flip-flopping from boy-girl in the space of a harmony. Clearly, they are in awe of repeated rhythms that don't so much drone as much as they slo-mo Popeye punch their way into your short-term memory, popping to the fore of your mind days after you last heard this. Pretty good, will drive you crazy after repeated listens mostly because, sadly, it isn't particularly exceptional. Next!

Gorilla vs Bear is the blog that starts much of the web's avalanche of hype and has, like Perez and Popjustice, recently started a label (should, for any historical record, anyone like to claim firsties, DiS was one of the first blogs to start a label back in 2003). So the new math: influential bloggers put out some releases by some of the better bands they've discovered = mad blog love for debut label release by Cults. And now, the follow-up, which is this glorious racket gracing my ears and yours too if you bash the play button above. It can't, therefore, possibly live up to or garner the hype of the last one. This second release follows a similar formula to a lot of the stuff GvsB blog about, in that it wobbles in a wash of noise, has lofi production heavily indebted to Velvet Underground/Albini and a rhythmic groove that sets it apart from a lot of the more tuneless chillwave twaddle. There's a melody that almost threatens to reach beyond a niche, which is a nice surprise but it's burrowed deep beneath the grotty production. Admittedly, the ethereal breakdowns are not a bazillion miles from the afore-berated Animal Collective but yuhknow, if that's the stuff wot blog-readers like, who am I to say that this blissed-out clatter isn't just incredibly 'on trend' but that it also reveals a blog-cum-label putting their pennies at the epicentre of where their passion bubbles. Sadly, rather than blowing my mind, after a few bashes of the play button it just sounds a bit generic. That said, if you're a GsvB/chillwave/sunwave fanboy there's enough here to make even me wish I loved all these sorta bands, marinated in shoegaze but then I go back to realising few have the overblown theatrics of M83 or the rambunctious skate-punk energy of No Age or Japandroids that'd have me on my knees. Sadly, Gauntlets Hair just sort of 'are'.

When Friendly Fires ingested the DFA back catalogue and regurgitated it with some English Mustard amongst their sweetcorn n' diced carrots, they cracked a glass ceiling. Metaphorical, perhaps, but the long-standing manifestation of a walled garden around the electro-pomp pop of Kylie, Scissor Sisters and co, and the clear demarcation of the territory known only as 'landfill indie' (Razorlight, Wombats, et al) left no room in the mainstream music press, on mainstream radio or on the stages of the heavily branded festivals 'market' for those not in leather jackets or glittering short-shorts. The over the counter culture left a rather big gap in the market and along came The Killers, The Bravery [possibly Klaxons too] and various other chancers. Meanwhile, in the bedrooms of blighty, this no man's land for sweaty boys with Korgs and cowbells, saw the likes of Everything Everything, The Whip and Delphic form bands and before long partying in after-hours 'clubs' until some men with chequebooks noticed, and the whole 'scene' wandered overground, took-over Nick Grimshaw's Radio 1 show (what is that perma-grinning clueless berk doing with a radio show?) and crash-landed in blog-hype mangled tip lists. And then along came the copyists, waving their Les Savy Fav and New Order 7inches, claiming they always wore that suspiciously fresh looking Duran Duran t-shirt. You know the sorts, years before you woulda found them in sub-Lostprophets Glassjaw-tribute bands. Now, these bassline-evangelising boy-men are thankful they no longer have to straighten their fringe every-bloody-morning. I have no idea if Safari were a band like this but they got me thinking, whilst inadvertently nodding my head, right up until it became clear - even with the chopped up "and, and, and, and," refrain and lyrics about a witch's heart - that this song wasn't going to explode into something off A Fever You Can't Sweat Out. Shame, the guitars flitter around nicely but the synths are too fucking 'pleasant' and made me lurch for my Trans AM albums long before my second listen to this track was over.

Our Lost Infantry 'The Arsonist'
Chorus is catchy as fuck but it all feels a bit too foot-to-the-floor that it ends up a touch too breathless to make my heart explode. Add to that the fact the overall aesthetic/production is a teeny bit dated and you have a good band, in need a sergeant major. That said, certainly seem like one's to keep a watchful mind's eye on.

Insect Guide 'Wasted'
Carried on a sea of charcoal grey late 90s, Elastica-inspired waves but also come across strangely now. Insect Guide, have got that same 'something' I can't put my finger on that the Joy Formidable have.

Field Music 'Let's Write a Book' (Memphis Industry)
...but I'd rather listen to nu-metal.

Pony Pony Run Run 'Walking On A Line' (3ME)
Synth-glop? Is this The Feeling making a track with Trevor Horn off his tits on MDMA? PPRR somehow manage to make a song worse than their band name.

Dutch Uncles 'The Ink'
I bet you like this next one...

Mumford & Sons 'Roll Away Your Stone'
I really does not like this next one tho.

Vampire Weekend 'Giving Up the Gun'
So dull and sound so thin/emaciated and essentially are Coldplay 2.0. File next to David Cameron.

Glissando 'The Long Lost'
I am lost for how to pronounce their name.

Wendy Roby is away but returns next week.