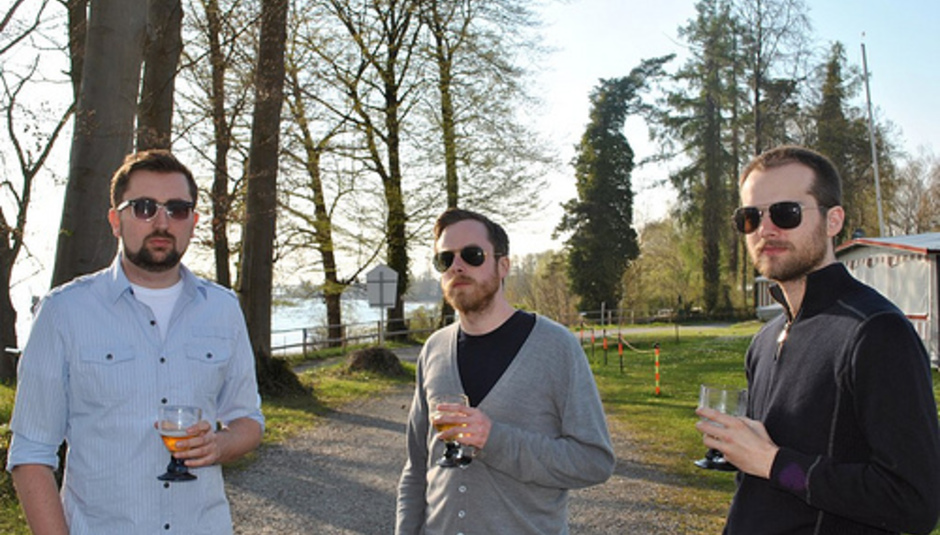 Ace historical themed post-rockers iLiKETRAiNS are currently touring Europe with Editors. So excited about this were the Leeds outfit that they asked us if they could put together a tour diary for DiS with pictures and stuff. Naturally, we thought this to be a grand idea, so here's Part 1 of their jaunt, courtesy of main singer/songwriter David Martin...

We aren’t the unluckiest band in the world, but sometimes it feels as if we are. We’ve been robbed in Italy, stared death in the face when a tyre blew on our van at 70mph on a French motorway, and a wheel nearly came off the same van in the UK. So when we accepted a last minute offer to support Editors in Europe, and with only a week to prepare for all eventualities something told me it wouldn’t be plain sailing.

With trepidation and sleepless nights we made our preparations. We hadn’t appreciated how much hard work and stress goes into tour planning until we tried to do it all in a one week period. Merchandise was ordered, routes planned, ferries booked, budgets balanced and re-balanced, strings, cables, bacon, beans and teabags bought etc etc etc. We also had to fit in a couple of rehearsals as we haven’t played live for a couple of months. The tour is on a very tight budget, and as our van was out with another band, we worked out that the most cost effective travel arrangement would be to hire a motorhome and trailer to carry our gear, thus saving on the cost of hotels. Our best case scenario is to break somewhere near even, but as a band currently without a label this tour represents a sizeable risk. On a positive note we are lucky enough to be playing in front of thousands of people across Europe and to put ourselves in the shop window for European labels and distributors.

DAY 1
We set off for our first show in Austria early on Sunday morning, with the prospect of a 20 hour drive looming large. I begin to relax as all of our hasty planning begins to come together and we make it over the channel without incident. It isn’t until Belgium that we hear the sound of shearing metal and we look out of the mirrors to see our rental trailer sticking out at an impossible angle. We manage to pull into the hard shoulder to inspect the damage. It doesn’t look good as the frame connecting the box of the trailer to the motorhome has broken. It is one of those moments where you have no idea what the next course of action should be, and for it to happen before we play a single show is galling. We make calls to our manager and to the trailer rental company and they come up with numbers for recovery companies in Belgium and alternative trailer rental companies. Arrangements are made for the trailer to be recovered but on a Sunday evening it is impossible to get it fixed or to rent another and we are still a 12 hour drive from Graz. We are forced to cancel the first gig of the tour. It is only the second time we have had to cancel a show in 6 years of gigging. We’re thankful that everyone is safe and our gear is in one piece. The whole incident could have been much worse than it was as the trailer was only a small piece of metal away from coming completely disconnected from the motorhome. DAY 2
We were fortunate enough to have had our trailer incident very close to a well renowned Belgian trailer maker. The trailer repair man also happens to be in the same small village that Alistair’s girlfriend is from. It is all a little too coincidental and Alistair is now under suspicion of trailer sabotage. We sit and drink some beers in the sun as we wait for the trailer to be repaired. Back on the road in the middle of the afternoon we drive through the night to get to Hohenems, the venue for the second show of the tour. Bad luck comes in threes as we hear that our van at home has broken down, and our sound man’s van has been broken into. I’m reasonably hopeful that we are over the worst now. It can surely only get better. DAY 3
After what feels like weeks we finally make it to a venue. Hohenems is a small town just over the German and Swiss border in Austria. We are playing at the Tennis Event Centre. We make our introductions to crew, Editors and fellow support band Airship. After being stuck in a van for the best part of 2 days solid, we let off some steam with a kick around whilst the Editors boys play a spot of tennis. It feels like a cliché, but one of the hardest parts of touring is killing time, so it’s nice to take the opportunity for some physical exercise when it arises. The show itself goes well with a pretty good reception. The atmosphere is a little flat for all the bands. I get the impression that many of the people came to the show because it was a big event in their town and not because they were music fans. More than one person came over to us when we finished and asked why we had only played for half an hour and in the course of the conversation it became clear that they thought we were Editors and were feeling pretty pissed off that it was such a short show. Very odd! DAY 4
Wednesday is a day off, which is a bit disappointing as it would be nice to get a few shows under our belts. We find a beautiful campsite just over the German border on Lake Bodensee. The sun is shining and it’s one of those rare moments on tour when everything comes together nicely. This is our first time touring in a motorhome and we get into the swing of campsite life with a spot of crazy golf and table tennis. DAY 5
Our second show is in the small town of Rottweil, home of the dog. The venue is an old World War 1 munitions factory and there is a fantastic sinister industrial atmosphere about the place. Germany has always been a good place for us to play, and although the crowd is smaller we are definitely back amongst music fans and the gig for all three bands has a much higher energy about it. DAY 6
A seven hour drive takes us to Dusseldorf. This is the first of the bigger venues on the tour and the nerves finally hit me, which is reassuring because I was beginning to worry that the buzz had gone. Everything goes reasonably well but I find it difficult to get into the show for some reason. With the bigger crowd comes a big increase in merchandise sales. It is all hands on deck at the merch area and we’re happy with a job well done and some new fans gained. DAY 7
In Bremen we discover that Editors tour with a table tennis table. This is the best idea in touring since the invention of the rider and I fully intend to implement it on future iLT tours. We have a quick game of doubles iLT vs Editors which Simon and I lose narrowly. I get beaten twice by Russell but he has toured with a table for four years so has had some good match practice. It isn’t over and I vow to beat him before the tour is out. I have another difficult show but we seem to get away with it and we do another great night on the merch. Our albums sell out and we make on the fly arrangements to get more delivered to us. DAY 8
Another day off. All these days off are not something we are used to. On our own tours we tend to have as few of them as possible to keep the costs down. We drop Ian (ex-Redjetson) off at the airport as he has work commitments. Ian has been playing extra guitars and keyboards with us on our last two tours, and we’re sad to see him go. He will be back for Belgium. We find ourselves another campsite, do some swimming and some more crazy golf. We’re beginning to think that all the ball-ache of having to make difficult manoeuvres with a trailer that we don’t really trust is being out weighed by the fun we can have on a campsite. This is the most active I have been for years....!