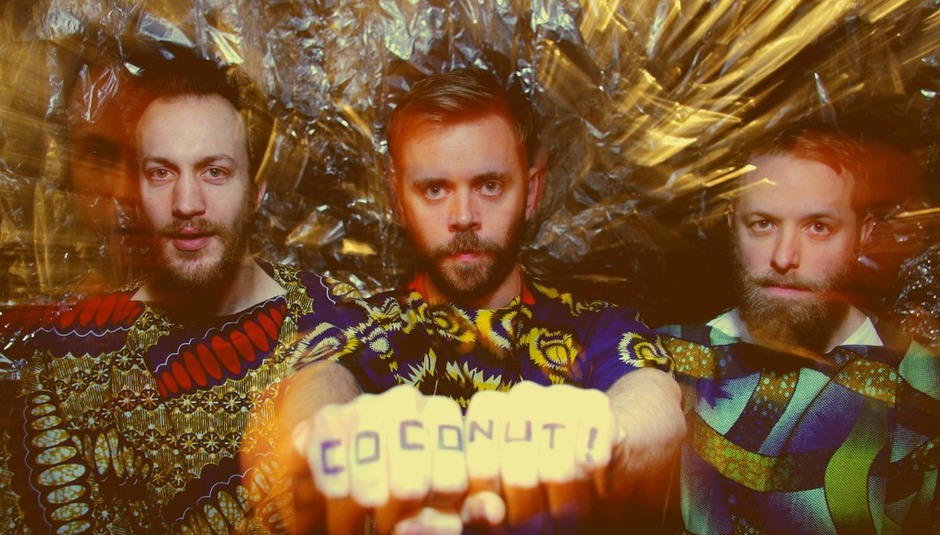 We love blues psyche primitives The Archie Bronson Outfit's fine new Coconut album, and you should too. You should PARTICULARLY like the fact that they were arsed to make a video to every song. YOU DON'T GET COMMITMENT LIKE THAT THESE DAYS. And here they are, with accompanying words from the band's Arp Cleveland and Dorian Hobday. Er, except on one song, where for whatever reason, they didn't. Our approach to this song sets the tone for the way we broadly came at this album; groove over structure wins. We were keen not to overwork initial ideas, which can make songs stale and predictable by the time you're recording, so once we'd the nucleus we left it alone until we were in the studio with the record light on. Instead of just mic-ing up and recording 'the take' as is our norm, here Tim [Goldsworthy, producer] brought an element of modernity to proceedings; tightening it up, which in turn allowed us more freedom to experiment afterwards. An archaic sine-wave machine rigged up to various pedals created the 'aztec flute' backing noise. The lyrics tie in with 'Wild Strawberries'. Its a song about mind-phantoms.

Was turned on its head in the studio. It started life as downer country and ended up as downer disco. I guess it’s a good example of being open to allowing things to take an unexpected turn. The instrument playing the descending refrain is a Chinese string piano run through an old chorus pedal. Is that a first?

This was recorded back in London. After the sessions in Michigan, we were missing a certain vibe for the record and felt like a last minute stab at writing. We were booked into a studio to record some overdubs, but got together a couple of days and wrote Hoola and Chunk. Hoola is a tribute to a imagined sunny place – it’s mood seems to be the heart of the record. We were happy that we managed to get something really straight ahead that we were in to. Embrace the dumb, put a twist on it and enjoy it.

Small circles big circles. An attempt to do something quite physical. It is exciting to play; brutal and super simple - it has a kind of nihilism to it, just this pounding chord/beat. We were keen to add a dimension in the production that would elevate it from sounding to .... cod-metal (?) and the drones were the solution. The title is stolen from an Ingmar Bergman film, but the lyrics are more about escaping ones immediate past, rather than looking back over ones life (as in the film).

We had lots of songs with heavy geetars and no space, so consciously wanted to try and write one that had air in it. This was a last minute experiment that we didn’t really have any expectation of making the record. It wasn’t until after it was done and we had listened to it quite a few times that it really started to make sense. It felt like listening to another band; fortunately one that we really liked.

'You Have a Right to a Mountain Life'

'One Up On Yourself'

'YHARTAML' is a primal psych-scream. 'One Up On Yourself' was one of the first songs we had written for the album. trashy geetars ahoy! A space swing girl group number. Kapow!

Bite It and Believe It'

There is a song on our first record called 'On the Shore' which we all loved so we wanted to do something in a similar vein. This was the result. Girl band beat, elctro hi-hats, moog bass, real bass, tremelo geetar... its a really trad song in a way, but with some colliding influences. It also features a late addition (Peruvian) flute part. A chord progression? A melody? Whatever next!?

(er, the band appeared to have nothing to say about this one. JUST ENJOY THE PICTURES, YEAH?)

We were keen to do a song that did not have peaks and troughs at all and this was the outcome: a musical plateau. Tim introduced us to a sine wave generator and we ran riot with the pulsing soloing tone that starts (and plays throughout) the song. It's similar to 'Wild Strawberries' in a sense; a simple rock song elevated (hopefully) through production. It is romantic; escaping the past and falling in love, not on a silver machine, but a red one with a leather saddle.

This song is the only one written outside of the group confines. Harry Crews' spirit looms over the lyrics, they had been lying in wait for some time and had never found their way onto a song, so I banged one out on the piano with my rudimentary skills and we worked it up from there. Garage-psych-gospel music!