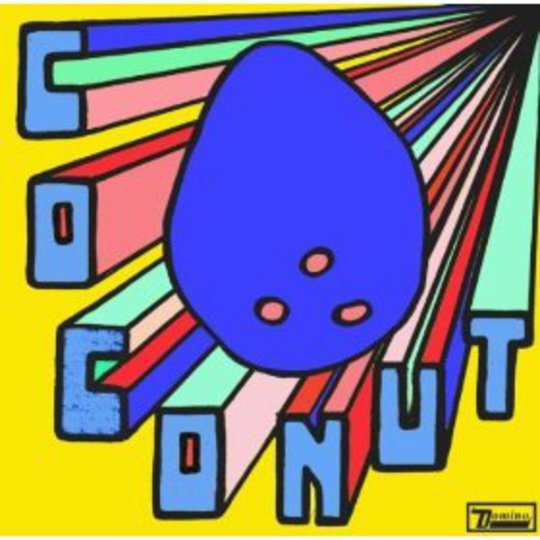 My first experience of the Archie Bronson Outfit was around two years ago in a packed and uncomfortably humid marquee, the elements raging around us in exactly the kind of manner you might expect given our location in the Black Mountains. It was a charged, enlivening performance, drawing on all that is murky and raw about rock music, effectively echoing the torrential downpour taking place outside in the process. Pity those that came by the tent looking for some kind of respite, for the brutal spell of ABO’s live show offered nothing of the sort.

The trio’s third album similarly makes little concessions to the casual listener; in adhering to its creators’ twisted visions so precisely, it demands your attention from the outset – that kitschy cover art might come off cute, but don’t let it fool you. Coconut is a fierce, abrasive work; crack it open and it isn’t sweetness you’ll find within, but a bracing set of compositions ranging from the furious to the oddly affecting in tone.

‘Magnetic Warrior’ gets things going, falling somewhere between the two camps: a thick, churning guitar riff over which Sam Windett’s unhinged vocal implores “Don’t let yourself fall apart!”, a well-meaning but ultimately demented mantra. Replete with rolling layers of tribal percussion and siren-like washes of noise, it’s a gripping introduction to the album, though immediately bettered by the subsequent ‘Shark’s Tooth’, which marries all these ballsy sonic moves to a poppy hook. All slithering, insidious guitars propelled by a bassline that feels lifted straight out of Joy Division in their pomp (see also the pleasingly onomatopoeic ‘Chunk’), it’s admittedly unlikely to go chart-bothering anytime soon.

ABO have long been considered in terms of vitriol and claustrophobia, and while Coconut is strewn with plenty of both – get a load of ‘Wild Strawberries’ or the nightmarish pagan whirlwind ‘You Have a Right to Mountain Life’ – they’re not opposed to letting a little light in on occasion, often resulting in some of their most memorable songs. Flanked by unholy buzzsaw sound effects it might be, ‘Bite It & Believe It’ is essentially a big, airy melody that might be the simplest, saddest thing the band have ever done. Indeed, when Windett sings “Don’t tell me I’ve no feeling”, he could almost be addressing those that accuse the band of lacking due heart. He’s not, of course (he’s rebuking a former lover, I think), but the sentiment remains.

The brakes stay on for ‘Hunt You Down’, where pretty clockwork melodies belie wicked turns of phrase (“Oh, I’m gonna hunt you down / I’m gonna hunker down / I’ve got a hunger, now”), though the careening flurries of noise return to close out Coconut with a massive one-two salvo comprising ‘Harness (Bliss)’ and ‘Run Gospel Singer’. The former erupts into a thunderous two note riff about a minute in – the kind that would likely find comparatively wizened old rockers from Josh Homme to Roky Erikson nodding in uniform approval – from which point on the album never really lets up. ‘Run Gospel Singer’ is even better; a loping two and a half minutes that becomes ever more expansive as it marches on, female backing vocals adding shade to a crowded but never overtly busy palette.

Coconut, then, is a baffling, dirty, even exhausting listen at times, but never less than engaging throughout. When it peaks it exudes wild, untrammelled invention – an explosion of ideas barely kept in check by its makers, but kept in check all the same. That’s the thrill of it, really; to want for any more would just be selfish.