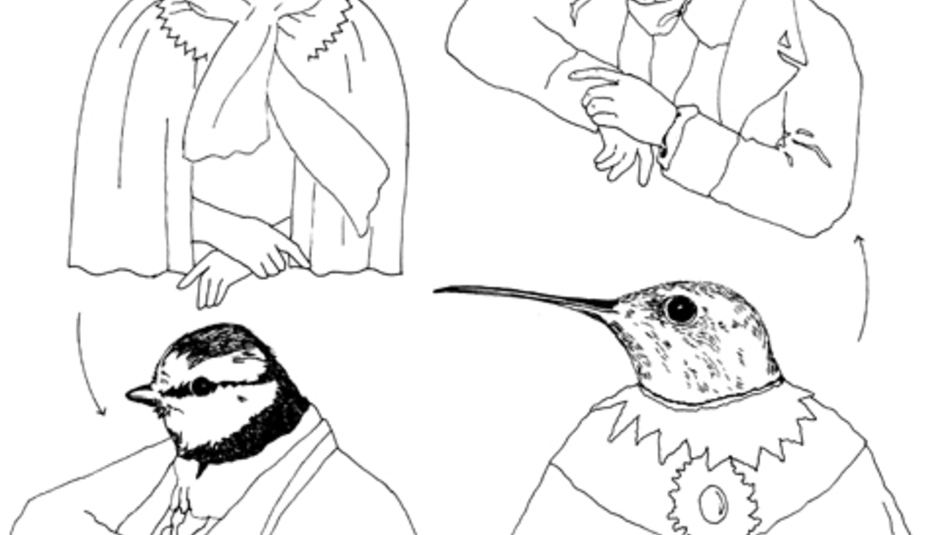 Unless the word ‘opera’ inspires you to short term amnesia, you probably won’t have missed the fact that Swedish electro gloom siblings The Knife have finally followed up 2006’s peerless Silent Shout with Tomorrow, in a Year. An ‘electro-opera’ based on the writings of Charles Darwin, written in collaboration with Berlin-based kindred spirits planningtorock and Mt Sims, it was commissioned by semi-legendary Danish live art troupe Hotel Pro Forma as the soundtrack to its production of the same name. It’s an hour and a half long, only has one song with a chorus, and attempts to evoke the sweep of the entirely of evolutionary history via the medium of wildly oppressive electronic rhythms based on field recordings of animals. It’s AWESOME. Read our 10/10 review HERE, then strap yourself in as The Knife’s Olof Dreijer discusses his dreams of Darwin and the downsides of frogs that sound too much like synthesisers.

DiS: Were you aware of Hotel Pro Forma before they approached you?

Olof Dreijer: No, but I looked into them and I liked what I saw they were very forward thinking in the type of audio/visual work they were doing in the Eighties, and their artistic director Kirsten Dehlholm even before that.

DiS: Why did they approach you, do you think?

OD: I think they like to work with people who are not professionals, you know, so they approached us, not an opera company – I didn’t even really know what a libretto was. But I suppose they felt some kinship because The Knife is quite a visual thing.

DiS: Was it a hard thing to commit to? I get the impression it was quite time consuming.

OD: Yes, I have been doing some other projects as well, but I committed two years. By the end I was thinking about nothing but Darwin, dreaming evolutionary theory, you know? I think I had a few reservations, not about Darwin but the way he’s been used, these very unpleasant ideas about social hierarchy, but I didn’t really take that much convincing.

DiS: It’s a record made by electronic artists, concerning scientific theories, and yet it sounds very organic and lush and primal – was that the way you always hoped it would turn out?

OD: I think so: this palette of feedback sounds mixed in with acoustic, orchestra, percussion, this contrast and diversity was something of an aim, I guess.

DiS: So my understanding of a libretto is that it’s kind of the sung plot of an opera, but you can’t really apply that to Tomorrow, in a Year...

OD: It’s more of an abstract feeling throughout the process and one can interpret it in many ways. But we had for ourselves sometimes quite clear topics, but they’re not meant to have to be translated into the piece, it’s very abstract in that sense, though I think Hotel Pro Forma on stage imply certain topics.

DiS: At what stage in the process did you and Karin decide to work with Mat Sims (Mt Sims) and Janine Rostron (planningtorock)?

OD: Quite early on. I had been thinking before we were commissioned of collaborating with Mat and Janine and this was a great opportunity to try; we thought also that this theme is so big and diverse that we wanted to capture this by bring in more people. But also Mat, Mt Sims, he’s a total Darwin connoisseur, and we wanted to go into orchestral instrumentation, which Janine has great experience of. And also we wanted to come up with a way to have fun with this project. It’s been a really great collaboration and I think it’s something we’re going to continue with.

DiS: Did you actually all work together in one studio?

OD: Well, me and Janine worked with more instrumental tracks, so we went to Iceland together to record all the percussion. There was this percussionist who we would give recordings that I made of animals, and he would interpret them with his instruments and this kind of translation of rhythms and sounds was quite fun. Then with Mat we worked more on song-based tracks, and he and Karin [Dreijer Andersson] wrote the whole libretto, all together.

Then also I was working on different, exciting ways to approach opera. In the beginning this was very difficult, because opera stood for something so conservative, that takes all the governmental culture funding from exciting culture. But if you just see it as an extended theatrical musicality of some kind then it was a really exciting thing to attack. So we had different focuses, but, for example, on one track, called ‘Letter to Henslow’ we were all together in one room making animal sounds, so that was a very concrete collaboration.

Video: extracts from Tomorrow, in a Year the show

DiS: Is it really an opera, strictly speaking?

OD: Well I think it is an opera because ‘opera’ just means ‘a work’. This is definitely extremely conceptual, but every musical choice is motivated by text, and to me it becomes an opera and also it’s a conceptual music piece. I don’t actually bother worrying what to call it. But it is fun to take over an old expression and make it into something new.

DiS: Did a lot of musical experiments end up abandoned?

OD: Yeah, definitely. Like one quite early idea I had was to base all the tracks off of animal recordings, like record one separate animal and put it into the sampler and make melodies and rhythms out of that. But after a while that felt quite banal and not having anything to do with evolution, it’s more documentation.

Also I recorded some kind of fish that sound like drum machines and synthesisers. That’s sonically super exciting, but also didn’t want to say it was a fish sound, I wanted to keep it open, and when you didn’t know it was a fish it did just sound like a normal drum machine and then it’s not exciting.

The animals were more about modulation, so perhaps the mating of a frog would determine the phrasing of a synthesiser or percussion so that then the phrasing of an instrument became a more interesting process.

DiS: How valuable was the field recording trip to the Amazon you made?

OD: Being there really inspired me in so many different ways, but the musical quality of the animals I heard there were so much more exciting than the ones I had heard before, they had really funky rhythms. Also I think it was really great to hear such unexpected sounds. I’d studied these animal sounds from the library and they were all quite relaxing, but when I came to the Amazon I found them all quite disturbing and rather grotesque, and really electronics sound better like that. I think one of the challenges was to take an ugly sound or an atonal sound and make something out of it.

DiS: Do you think you could just go back and make a ‘normal’ Knife record again after all this?

OD: Erm... no. I learned a lot and I think I’d like to work more conceptually, based around a text or historical event, something like that. But I guess The Knife is one of our projects and we’ve always been working on more abstract things on the side.

DiS: In terms of Hotel Pro Forma’s finished show, did you have much artistic input?

OD: I was involved a little bit, we worked with the singers to translate what we had done onto the stage, and that was really exciting, I had never written music for other singers before, and I think they did a really good job. We had been working on the music for a really long time we had our own images that were pretty different from what Hotel Pro Forma had done, and that was separate from the choreography too, so everything was done very separately, it was a very interesting process.

DiS: So none of the artists who made the album are part of the stage production?

OD: No, all the music on stage is pre-recorded, but the singers sing everything live with voice transformers and effects and stuff. Hotel Pro Forma is travelling with the singers and dancers and we have kind of left the performed version now.

DiS: Did the research and recording process change the way you looked at the world in any sort of meaningful philosophical way?

OD: Yeah, I think it was really positive reading Darwin’s stuff and lots of writings on understanding his theories: this thing of everything constantly changing, nothing’s static; always questioning what you find; there is no ‘natural’; always give self-critique; all these different things that he stands for seem really a positive. I’ve been reading lots of different examples of how to apply theories, like queer theory, to the readings of Darwin. So he provides a link to how to see gender because gender is constantly changing and never static and constantly changing, you find these patterns everywhere. And I think he was also really early on questioning this development of this early social Darwinism, these eugenicists who believed the different races came from different species. He didn’t even use the word ‘races’, he just said ‘variations’.

DiS: The chorus to the last song, ‘The Height of Summer’ suggests a future where Darwin has become forgotten – is that meant to be any statement on creationism?

OD: [Laughs] I couldn’t answer that really. Karin wrote that line, you would have to ask her, but I don’t think she would answer, she doesn’t like to explain her lyrics!

DiS: Yeah of course, but it does stick in your head, seeing as it’s basically the only chorus on the album.

OD: Yeah, we tried to do a song like the song you would hear in the credits at the movies, so the real end is the next last song. It’s the last sign of humour.

DiS: It is the only track that sounds like the Knife.

OD: Yes, maybe it is like the turtle in the evolution, it never changes...