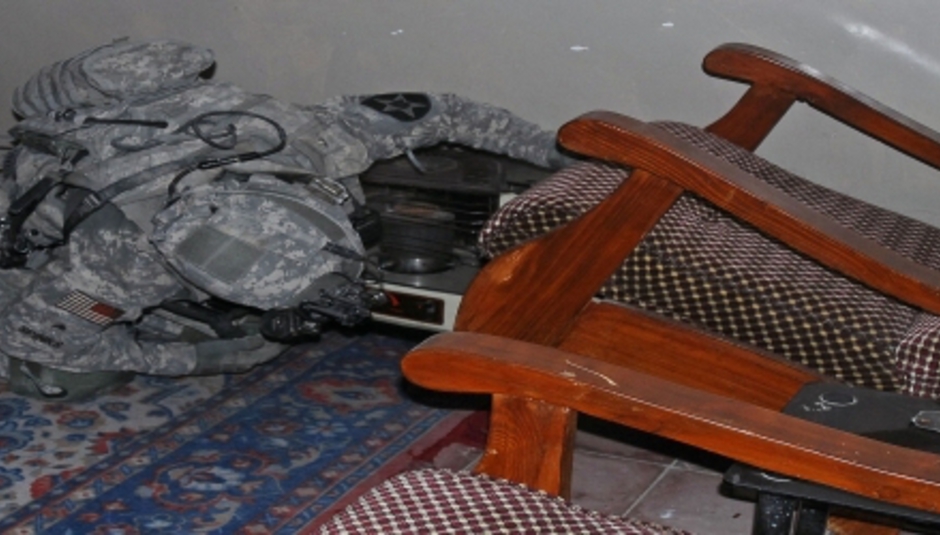 Before getting to the best of the latest electronic releases, it's with great pride that armchair dancefloor introduces an exclusive mix from Devon's Ed Davenport, aka 10-20. He's put together a sequence of his own tracks, most as yet unreleased, that conveys his gift for weaving detailed meshes of sound supported by staggered, rattling beats. These experimental, border territory pieces shift between techno, dubstep and areas a little trickier to define, combining solid heft with something more fluid and uncertain. 10-20's 2010 is a brief but absorbing journey through a distinctive soundworld, one that takes you over varied and intense terrain before finally depositing you in the chirruping, idyllic surrounds of 'I Found You'. If you like what you hear, grab yourself a copy of his excellent new EP, Mountain.

Prior to listening to Going Places I'd never knowingly heard a bar of noise duo Yellow Swans' music before, which is all the more galling because their last ever album - members Peter Swanson and Gabriel Mindel announced their split in April 2008 - is clearly the work of masterful artists at the top of their game. According to those with better (i.e. 'any') knowledge of their extensive back catalogue, it's also their most structured album; and what dramatic structures: built on the scorched ground between metal riffage and electronically augmented drone, these six tracks impose themselves with glowering intensity.

Perhaps the most powerful aspect of Going Places is its ability to immerse you in dense soundscapes without ever resorting to bludgeoning (apart, perhaps, from during the title track and album closer's blizzard-like outro), so that you retain the ability to pick out each piece's central motif despite their being buried in teeming masses of detail. The synth lines of 'Sovereign' hang over churning feedback and a disintegrating rhythm, their arcs describing a present but indiscernible mystery; 'Foiled's subtle melody plays out behind a crackling, granulated foreground suggestive of a consuming fire.

On 'Opt Out', the album's longest piece, the quivering treble of Swanson's guitar launches itself into a weightless space above the chaotic strife of feedback and digital roar below, while what sounds like massed chanting and great beams of noise seethe beneath the hypnotic finger-cymbal hits of Limited Space. It's this creation of tension-filled three-dimensionality that makes Going Places such an addictive experience, and the demise of Yellow Swans so regrettable. Mount Kimbie associate James Blake's second EP, discounting this month's split 10" with Airhead on Brainmath, offers 15 minutes that contain at least an hour's worth of ideas (that's an accurate scientific measurement, not casually tossed-off hyperbole). 'The Bells Sketch' clambers into view carried on a downward arpeggiated melody line, a G-funk organ, modulated vocal clips that range between mournful and more mournful, and a bassline that's had all the air squeezed out of it. The overall effect is that of a broken robot snail taking a final trawl through its memories before getting unceremoniously trodden on (another scientifically rigorous judgement, you can rest assured).

Better still is 'Buzzard and Kestrel', where a pots-and-pans rhythm and those recurrent warped and diced vocals are accompanied by an almost subliminal Moog line that periodically presses to the front in a rush of keystrokes that bring both Stevie Wonder and Steely Dan to mind. The effect, heightened by the fizzing organ surges at the track's climax, is an uneasy accord between celebration and sorrow. That same mood imbues 'Give a Man a Rod', the pleasantly dawdling introductory melody of which is brushed aside by a fragmented collision of vocal and keyboard stabs, and a menacingly circling bass hum. Thrilling in terms of its invention, Blake's music goes a step further by tapping into the sadness that lies at the heart of all real soul music. By rights, Anthony 'Shake' Shakir should be as well known in techno circles as the Belleville Three (Juan Atkins, Kevin Saunderson and Derrick May). That he isn't is largely down to his own decisions: he always resisted having his records marketed in Europe, which is where his real audience lay, and releases on his own Frictional label have remained strictly limited and, as a result, vanishingly rare. This superb retrospective, put out by Dutch label Rush Hour, should however free Shakir from the 'forgotten man of techno' label and let him be known for what he really is: a supremely talented composer who's pre-empted many of the last decade's dance music styles. Dubstep heads listening to the sub-bass pulses shaking out from under the sonar stabs and crisp electro breakbeat of opening track 'Mood Swing' might have trouble believing it came out in 1996. Fans of the unquantized crunch and crackle of FlyLo, et. al. will need to check 'Here, There & Nowhere'; despite being predominantly a techno artist, Shakir has always been influenced by hip-hop. Indeed, his restless cycling through styles might be another reason for his obscurity.

For the most part, though, this is techno music, albeit of an almost uniquely accomplished stripe. Indeed, Underground Resistance's Mike Banks has called 'Electron Rider' (present here in an edited form) the greatest techno record of all time. Listening to its raw blend of astringent rhythm, rough funk and straightforward but endlessly involving sample stabs, it's possible to see where he's coming from.

Sheffield duo Mark Fell and Mat Steel have, a little later than originally planned, self-reissued their first three albums as .snd, which have been unavailable since the superb avant-garde label Mille Plateaux (due to relaunch in the spring) folded in 2004. The reissues are available in download format only, which seems entirely fitting for a pair of expert computer programmers who have, throughout their careers, been honing an ascetic digitalism that was spartan to begin with.

There's a counterintuitive comfort to be found within this seemingly forbidding aesthetic, though: the pleasure, perhaps, of impeccable design. The outwardly stark modules of 1999 album Makesnd Cassette are lit by a distant but enveloping warmth, as with the beautiful dabbed and panning pads of '11'. Listening to stdio, from 2000, the strangest, most exciting thing to note is how the syncopation of UK garage can be discerned in the spaces between these supposedly austere beats (Fell has stated his dislike for music that 'isn't strict enough'). This strand continues on into Tender Love, which I can remember at the time of its original release in 2002 being held up as a fusion of micro-house and the then-novel rhythmic advances of Timbaland and Rodney Jerkins.

Don't be misled by the pop references: this is still experimental stuff that's working in an extremely minimalist mode, but the textures .snd generate from spare materials is worthy of far more than just academic respect. Additionally, it's worth noting that tracks from either of these albums could be slipped onto a Hyperdub 12 and not be spotted as sounding a decade old: they are cousins to the spare echo chambers of King Midas Sound and Kode9 and Spaceape's sorties into menacing, vertiginous empty space.

Joy Orbison – The Shrew Would Have Cushioned the Blow (Aus) Having neatly sidestepped the potential albatross of 'Hyph Mngo's huge success simply by producing more great music (including last November's tracky 'BRKLN CLLN', and the same month's gorgeous remix of Four Tet's 'Love Cry' (a considerable improvement on the original, IMHO)), Joy Orbison might soon be able to get reviewed without THAT TRACK getting mentioned. Not yet, though: his sound is too distinctive for it to be forgotten, with 'Shrew' using essentially the same ingredients - light-struck shafts of two-note synth that streak from background to foreground; a buttery roundedness to the bass; micro-sampled female vocals and the ghosts of a thousand raves past swarming at its heart - albeit in a significantly altered combination. Indeed, this is a more meditative track than 'Hyph', which was infused with a similar melancholy but buried it deeper within itself. The only sensible complaint you can make about this is that it isn't called 'TH SHRW WLD HVE CSHND TH BLW', but I guess everybody has to make their peace with vowels sooner or later.

Vex'd are set to follow up their influential Degenerate album in a few weeks, but in the meantime one half of the duo, Jamie Vex'd, is taking an opportunity to release music under a new name, Kuedo. Continuing his affinity with producers at the lurid lurch-hop end of the bass music spectrum (think Rustie or Slugabed), 'Starfox' and 'Joy Construction' both deal in a forceful brand of pixellated funk. 'Shutter Light Girl' is a haunting beatless interlude that could happily be extended well beyond its one-minute length, but the most interesting work on show here is closer 'Glow', where the beats, so tightly wound on 'Starfox' and 'Joy...', are allowed a little more space to breathe, while thick, flatulent synth lines flap and squirm around one another with a manic virtuosity.

Like Madlib with a lot less of the 'lib', Londoner and blog mixtape darling Dem Hunger blends a deranged marinade on debut album Caveman Smack, which careens through extended periods of destabilising sound collage, tape hiss and found-sound randomness before hitting upon moments of extraordinary beauty: the glimmering, crystalline synth-harp glissandos of 'Fried Squid'; the wet hi-hat slap and winding string-sample and ghostly vocal drones of 'Horse Stomach'; the nearly-euphoric haze of the closing track, the 'matthewdavid Ragamix' of 'Mosque Vibrations'. If you're going to fall for this album then it's most likely to be the original version of that track that draws you into what might otherwise seem, on first listen, an arrant mess. An immensely peaceful tenor sax line, moving in and out of a thick modulating tone, blows above bone-like percussion, antique vinyl crackle and brief veils of rainfall. The track itself moves on, in Dem Hunger's restless way, to a fractured conclusion, but the memory of that saxophone, redolent of both Coltrane and Pharoah Sanders at their most meditative, informs the rest of this cracked, impressive album: ugliness and chaos is always more interesting when you know the person creating it knows what beauty is, too. Another project arriving at grace via seemingly ungainly means is SOG's Abweiching ('Deviance'), and it's creator, Woflgang Voigt, is someone whose artistic capacity for beauty is, as many will know, pronounced. His four superb ambient albums as Gas, recorded between 1996 and 2000 (Mille Plateaux, again), are essential components of any halfway serious electronic music collection, but his relaunch of the experimental Profan label, which aside from a solitary 2008 release has been inactive since 2000, sees him pursuing a quite different musical agenda.

Abweiching is a single piece in four movements, and begins by pushing the listener away with the harsh, rigid angularity of its rhythm, like Untold going too far. But, even as the position of the beat's kicks become even more arbitrary, a clarinet, horn and violin phrase arrives, as sublime as it is unexpected. For the rest of its 18-minute length the piece develops this tension between the rhythm, which becomes both more hectic and funkier, and these small islands of rich orchestration, which move from a post-Wagner melancholy through to the sliding strings of Ralph Vaughan Williams at his most mystical, and finally - and less convincingly, it must be said - on into lush Messiaen-like trills. Voigt's sound-art, which is audacious enough to break into a kind of techno oompah-band version of 'Eton Rifles' at one point, frequently brushes against the ludicrous, but makes it through to attain an unlikely gravity.

He DJs as one half of British Males. Download their mixtapes here.