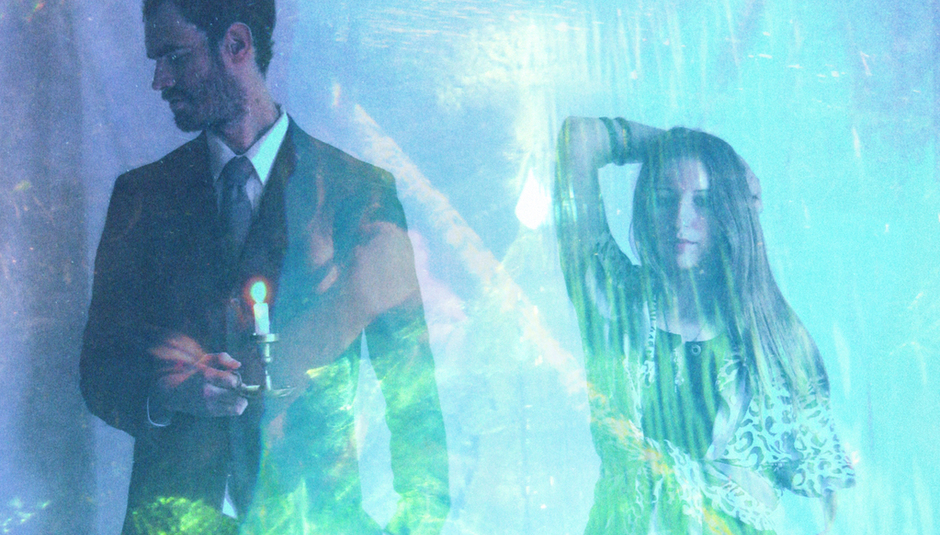 Following the unanticipated success of the Grizzly Bear 'Gumbo' recipe last year on DiS, we toyed with the idea of a regular indie-rock in the kitchen section on DiS. Yet, we soon discovered that many of these so-called 'creative' musicians have the idea that a culinary delight is adding brown sauce to a Ginster's pastie that was accidently cooked in the glovebox by a faulty van heater. Of course there have been exceptions (Harriet from Los Campesinos! in particular) but then we saw White Hinterland's twitter, with Casey Dienel offering up daily recipes, so we thought, in the run-up to their new record Kairos, rather than just review it and give away some tracks to showcase their snow-capped electronica (think Ladytron and Broadcast with a generous dose of Lykke Li, Bat for Lashes and JJ whisked in), we'd, er, make them sing for their supper; or rather give you some ideas of what you can eat for yours...

We spent all summer recording at our friend and co-producer Alexis’ Liophant studios. In exchange for letting us chill in his house, I took to making everyone lunch. Without a doubt, food is the place where our lives and our work bleed together the most. I cook similarly to how I like to record. I try things out, test new ideas, ready to deviate from the original plan if it suits my fancy. Most often I brought some kind of salad, a light dessert, and this chicken salad for sandwiches. I’m uncertain how it happened that we began eating chicken salad every day; it was an unspoken ritual. We turned into chicken salad connoisseurs until one day we stumbled on The One, almost entirely by accident. On a night where I had run out of Hellman’s, I improvised and whipped up some homemade mayonnaise. The difference was a much lighter, more delicate salad. That chicken salad was the prima ballerina by which all future salads would be judged. Not your corner-deli’s chicken salad. The One was chicken salad all grown up.

Homemade mayo has a sexy, (yes, sexy!), soft yellow color. The flavor is silky, luxuriant, and tangy. When you add it to a chicken salad, it binds all of the other flavors together without masking them. Tarragon, that delicate anise-y herb, is a homemade mayonnaise’s best cotillion partner. The dressing maintains the creaminess that a chicken salad is wanton for without leaving behind a heavy mess in your stomach (very important when you have 6 hours of mixing ahead of you yet!).

I prefer to use grapeseed as opposed to olive oil to make sure the mayo achieves the right flavor (even a wonderful, buttery olive oil tastes too assertive here).

Ingredients for the Salad

4 large split chicken breasts, bone in & skin in tact (you can also use leftovers from a roast the night before)

3/4 cup of mayonnaise (see recipe below)

Ingredients for the Mayonnaise

1 cup grapeseed oil (or any neutral oil such as safflower, canola, etc.) Place the chicken breasts skin side up on a rimmed baking sheet (my oven is small, so I often have to use two pans). Rub them with olive oil and season liberally with salt and pepper. Roast them for 35-40 minutes, until they are completely cooked through and the juices run clear.

While the chicken roasts, make the mayonnaise. In a medium bowl, whisk together the egg yolk, garlic, 1/2 of the lemon juice, and a healthy pinch of salt. Add the oil to the mixture slowly, about 1 teaspoon at a time, whisking constantly. You want the mixture to begin to thicken and emulsify. When you’ve added about 1/4 cup of the oil, you can begin to slowly drizzle the remaining oil as you continue to whisk until the mayo is thick and quite shiny (Sometimes I have a friend drizzle while I whisk, or we take turns, makes the time go by faster). Test it for seasoning, adding more lemon juice or salt to taste.

When the chicken is done, set it aside to cool completely. This will allow the chicken to retain its juices. Meanwhile, use this time to chop the tarragon, celery, and garlic, and toast the pine-nuts.

When the chicken has cooled, peel off the skin and remove the breasts from the bone. Discard the skin and save the bones for making stock later. Shred the chicken with two forks, shredding will help it to absorb more of the dressing.

Transfer to a large bowl. Add 3/4 cup of mayonnaise, lemon juice, celery, garlic, tarragon, currants, and golden raisins. Using a spatula, toss all of the ingredients to combine. Add more salt and pepper to taste.

Serve either on top of a few leaves of Boston lettuce or perhaps on a slice of Shawn’s homemade bread [recipe coming next week]. Keeps for about a week in the fridge in an airtight container.

Take a listen to 'Icarus' here